I don’t think enough people know about The Depanneur (I’m just going to call them The Dep). Or people have heard about them, but don’t realize the rich diversity of options this little food spot has. When I mention it to fellow vegans in town – sometimes they know about it, and sometimes they don’t – it really seems like a missed opportunity to eat delicious food while not only supporting a local small business, but also supporting the unique work of talented chefs.

The Dep really is the place where “interesting food things happen”. From having rent-able commercial kitchen space, to running workshops, and having tasty themed food events with guest chefs, it’s also home of the Rusholme Park Supper Club and retail space for local goods.

Lately we’ve been really enjoying Veg Out Wednesdays with Emily Zimmerman/Pear & Pepper. New and creative things every week. I like the oddly transient quality of it. The nature of the event makes it impossible to have a favourite dish, because it’s always something different, but always something quite lovely.

Every week, I look forward to seeing what she comes up with. Wednesday also happens to be the same night you can pick up your Fresh City Farms grocery order, so you could even pair the two up and feel extra productive. But wait, there’s more…. dinner on Wednesdays is also often Pay What You Can after 7:30.

Because dinners at the Dep are always so varied, I started an album on facebook collecting every vegan meal I’ve had there.

This is what November Wednesdays at the Depanneur looked like. November 13 – BBQ Tofu on a Bun with Collards & Slaw Chewy marinated pieces of locally-made tofu in a homemade BBQ sauce, on top of a bun and caremelized onions, a side of sweet miso-carrot coleslaw and smoky braised collard greens. 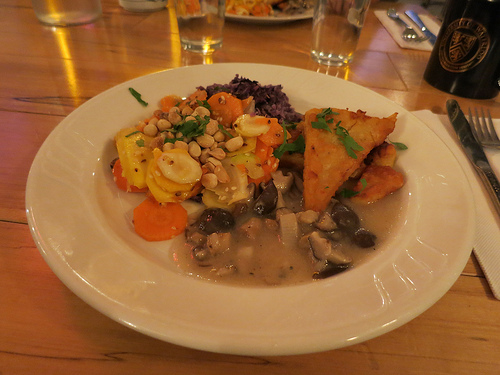 Before this dinner at The Dep, I had no idea what panelle was (aka Panella de Ceci or Farinata). I learned that it’s a savoury dish similar to polenta, but made with chickpea flour. Emily served this with a white wine-shiitake sauce, with caramelized red cabbage and a rainbow carrot salad topped with toasted peanuts and sesame seeds.

We of course also had dessert, which just happened to be a deliciously fashionable apple pie (Pie a la mode!) Perfect timing, Veg Out Wednesday was on the first evening of Hanukkah, which for us, fit in just fine. I wasn’t very much looking forward to making latkes myself, and latkes are always better when someone else makes them (something I’ve come to accept as fact)

There were delicious colourful latkes made with potato, sweet potato, and zucchini, with homemade applesauce, coconut sour cream, and a side of eggplant “herring” that we just couldn’t get enough of.

On the same visit I tried, and bought N0.7 Hot Sauce, and have been putting it on nearly everything (including into the coconut sour cream. Mmmm)

We finished off dinner with a plate of chocolate pecan rugelach, which didn’t look like much, but were rich, flavourful, with a pleasant texture. Rugelach are Jewish pastries of Ashkenazic origin and is traditionally made in the form of a crescent by rolling the dough around a filling. Tonight’s Golden Latkes are made with potato, sweet potato and squash, and served with homemade applesauce, sour coconut cream, and a side of Hammin Toscano, a Jewish-Italian stew made with winter greens, cannellini beans, and yuba.
With Chocolate pecan rugelach & Manischewitz sorbet for dessert.