Well I’ve been slacking on this whole MoFo thing, I’ve offered up enough excuses in my last post, so it’s time to just get on with it. 🙂 I’m hoping to get back my MoFo mojo. I’m jumping across the sea today. It’s just a short (well, okay, it’s short to a girl who takes 12 hour bus rides for a weekend trip) flight away (10 hours! yeah!!!). I’m first generation Polish and it’s been much too long since I was last in the motherland. Next year in September, I have a wedding to attend, so this is much less hypothetical than some of my other posts (will be). Plus it’s the perfect time to visit Poland, before they start using the EURO in 2012 and everything becomes extremely expensive with the exchange rate.

For other Polish Vegan options and ideas, I’ve veganized a few traditional dishes for the holidays last year, and WiecejYofu a bilingual blogger from Poland is doing a daily veganized traditional Polish recipe, so that’s pretty exciting.

I’m heading towards Warsaw (Warszawa) in the region of Masovia (Mazowieckie). I was last there over a decade ago, and it’s changed A LOT since then so I am really looking forward to seeing what’s new, and to see all my relatives again. 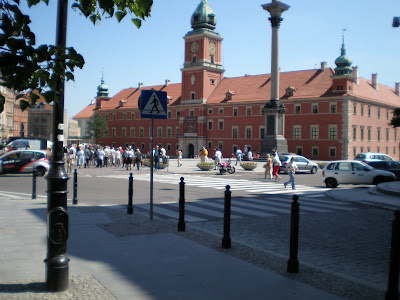 Resources: (Most of these are in English)

While many people learn English in school these days, not everyone does, and it’s nice to have a back up plan:

First is in english (obviously), second is the actual Polish, (third is how to say it using english sounds (according to me))

You can find a variety of phrase guides on the internet, this one is nice and simple, and printable. Zarzad Transportu Miejskiego (ZTM) PL ENG – The Public Transit authority of Warsaw. They are helpful and translate their site into Russian, English and German (just click the appropriate country flag), and have a trip planner.

There are multiple day passes, for different zones, but as an example a one day pass, for two zones is around 5 Dollars Canadian/USD (14.00 PLN) (as of todays currency exchange rates.) so it’s very reasonable.

Something else to consider is travelling by rail to other parts of the continent. You can do that with Eurorail. It can get pretty expensive, but you’d get one heck of an amazing view of Europe. I’d like to primarily focus on Warsaw, even though I know there are other places in other cities.

They have vegan/veganized options like lentil soup, bigos (which is a traditional hearty Polish cabbage dish that often has meat in it) and barszcz (you might know it as borscht, or just beet root soup).

Biosfeera Restaurant and Gallery (in polish) – Niepodleglosci 80, Warsaw (entrance is on Odynca Street) – Get off at the Raclawicka Metro Station. Honestly I am thrilled with the looks of this place. Word on the street (ok, well I read their menu– in pdf format, and in Polish) is that they have a vegan version of nalesniki (like crepes), they call them “Wystarczy chciec” (which is an idiom meaning All you need is want/if you want you can do anything). My mom has made some some amazing ones, but it’s always nice to try another version. They also serve vegan barszcz and pierogi. While they are not exclsively vegan, most things can be veganized upon request.

Another thing to know is that they do not serve alcohol, which isn’t a problem for me, but might be an issue for other folks. This place is moderately priced (one dish is costs more than a day pass for the bus) but still fairly inexpensive by North American Standards. Herbaciarnia-galeria Herba Thea, (in Polish) – Ul. Juliana Bruna 20, Warsaw, Pole Mokotowskie (Mokotów Field) Metro Station – They are open until 11pm every night. They have free wifi (darmowy internet) and are a kind of tea house. They have vegetarian options and a few vegan items (Bigos, the cabbage dish, again).

Vega Restaurant and Bar looks like a wonderful place. They are involved in (Fundacje Pozywienie – Darem Serca) the Foundation’s Food – Gift of the Heart program, so when people come here and buy food, they are supporting a great cause.

Address: Aleja Jana Pawla II 36C, Warsaw. Get off at either Hala Mirowska Tram Station, or Kino Femina Tram Station, then it’s only around a 3 minute walk to the restaurant. M-F 11-7pm, and weekend 12-7pm.

Royal Castle (ENG) (Zamek
Krolewski (PL))- plac Zamkowy 4, 00-277 Warsaw – Get out at Ratusz Metro – This is an amazingly beautiful building that for one reason or another, I have never been in (at least not after the age of three). The Lanckoronski Gallery is included and it has with Rembrandt’s paintings: Girl in a Picture Frame and Scholar at His Writing Table as part of the permanent
collection, and visiting collections (currently there are pieces from the Czartoryski Museum in Krakow, like DaVinci’s “A Lady with an Ermine”.)
The castle tour is 22,00 PLN (though on Sunday the tour is FREE!)

Old Town (Stare Miasto) –
This is the rebuilt version of years and years of history after it was destroyed in the war. It is designated as a UNESCO World Heritage Site, and is worth visiting always. There are a variety of tour operators that you can go through if you feel like it, but I feel like picking up a map, and wearing a good pair of shoes is all I need.

This looks like an amazing place and intense experience. This museum recreates the events and certain places from the 1944 Uprising. There are full-scale replica bunkers and ruins, arranged with recorded testimonials, artifacts and letters from that time frame. This place is FREE on Sundays, otherwise it’s 10PLN. There is also an audioguide available from the store in a variety of languages for 10PLN.

Maria Sklodowska-Curie Museum – ul. Freta 16, Warsaw. – (+48) 22 831 80 92
– A small museum (of only two rooms) that exists in the building this amazing woman was born in. It makes my nerdy science girl heart go all atwitter. There are random artifacts, like letters, a model of a nuclear power plant and a diorama of her lab. I am excited at the thought of taking pictures of everything (assuming they allow that sort of thing. They are not open on Mondays.

Zacehta Gallery/Zachęta Narodowa Galeria – Plac Stanisława Małachowskiego 3, Warsaw – is a big contemporary art gallery featuring photography, film, paintings, sculpture, and unique items. Admission is 15PLN BUT, it’s free on Thursdays. There are a few ways of getting here, but I would probably take the tram (15, 18, 35, 36) to Królewska (Queen!) station.

Flaki soj. (Orico) 140g – So this is probably one of the grossest dishes I ever heard of, and as a Pole, I feel comfortable commenting on it’s surpreme grossness. Even when I wasn’t vegan, it just was not appealing at all. Flaki are: thin, cleaned strips of beef tripe (and if you don’t know what tripe is, it comes from the first three chambers of a cow’s stomach). It tends to be made into a soup. Anyway… someone has made a version out of soy, proving that anything is possible. And also, making me incredibly curious. If I get this, this will be yet another veganized version of something I would have NEVER eaten as a nonvegan.

Backpack Europe – this site has some great tips. The one thing about being in Europe is that if you want to travel through five countries in the span of a day or week, it’s actually doable.