Back in August, we did a two week roadtrip through eastern Canada. We stopped in a few places along the way, starting with Montreal – Quebec City – Riviere du Loup – Rimouski – and Camping in Forillon National Park and Kouchibouguac National Park – and then onward to our other destinations.

Rimouski was the one place along the way that we could still buy the A&W Beyond Meat burger – everywhere else along our route, including when we looped back to Toronto, was completely sold out. So we stayed at the only hotel with a Tesla charging station (the Hôtels Gouverneur,) and it was just completely neutral all around, but we were charged up and ready to go to Forillon National Park. 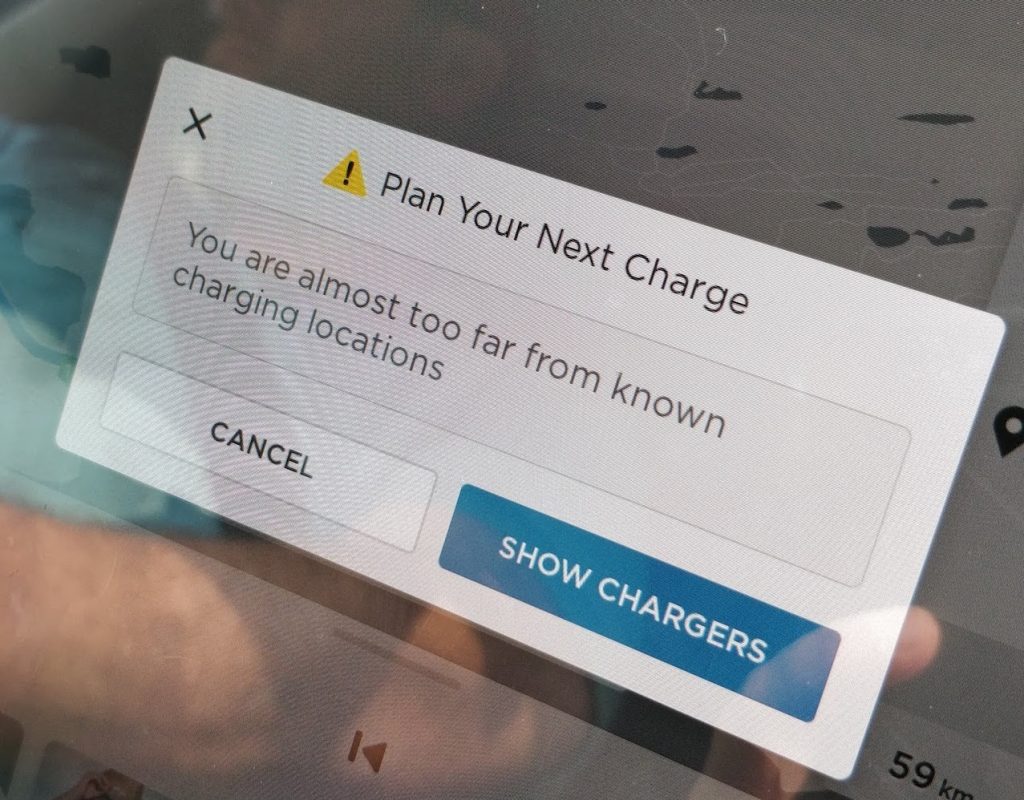 The fun part about driving from Rimouski to Forillon, is that our car gave us this wonderfully terrifying warning saying “you are too far from known chargers” and if you have ever experienced range anxiety, it can really grab you even if you have a plan. But we didn’t really know for sure. So it had a tiny tiny bit of an edge to it.

Something I never thought of before we got our EV is that if you stay at a campsite with a power connection (so especially spots for RV’s) you can plug in your car, and depending on the site, it can get you back to a full charge in a day or so (or even better if you find some of the 40V outlets.) So that’s what we were planning for. Of course, we had never done such a long drive before or plugged in at a campsite – so we were playing it by ear, and by hope alone. Spoilers: thankfully, it was totally fine.

I had wanted us to drive as close to the coast of the Gaspé Peninsula as possible, and I was glad we did, the views are as spectacular as expected and more, and would be for the duration our our trip around the east coast of Quebec. 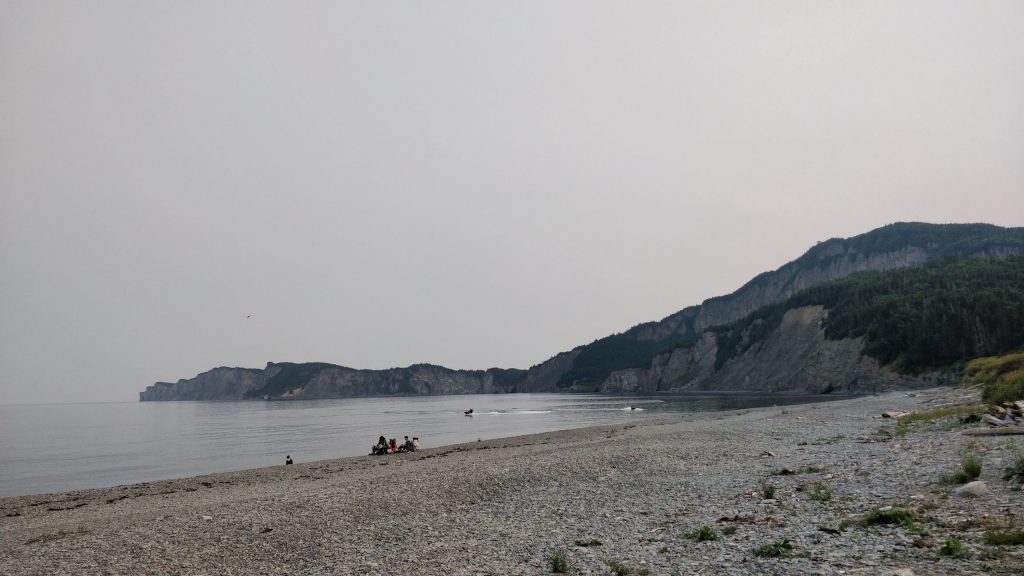 Forillon stands out as a place that was especially incredible during our two weeks away. We stayed at the Des-Rosiers Campground at campsite 141, and it was a short walk to Gaspé Bay, and the pebble beach surrounding it was just lovely. 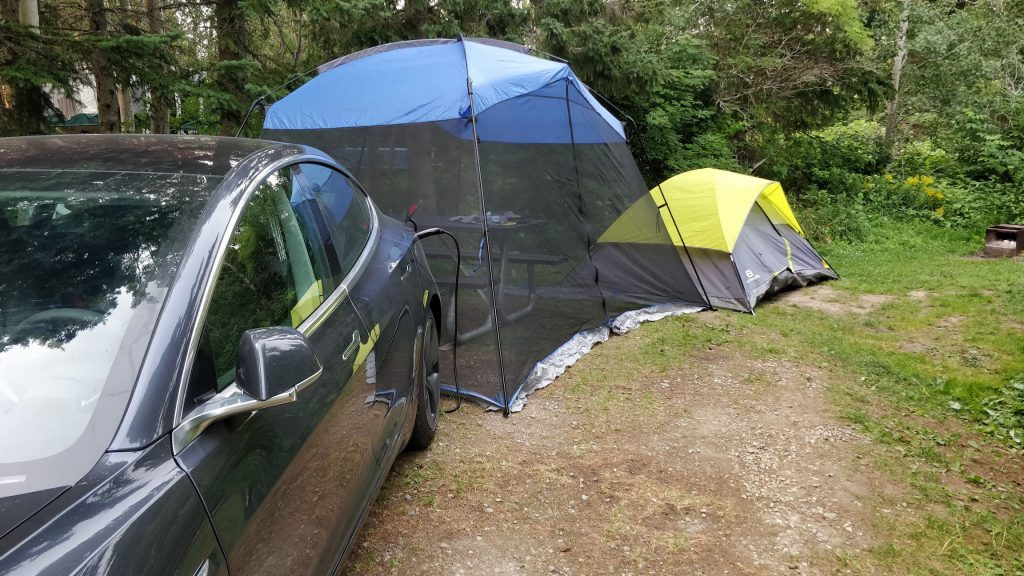 We had gone to a grocery store en route (Metro!) and picked up some tasty snacky campsite food, including Quebec made Unisoya tofu – Greek style (which was definitely a prevailing favourite while we were travelling through Quebec), kalamata olive hummus, veggie straws, grolsch radlers, grapes, tomatoes, and a couple of vegan-friendly Urban Picnik jars that we found in the ready-made food section. 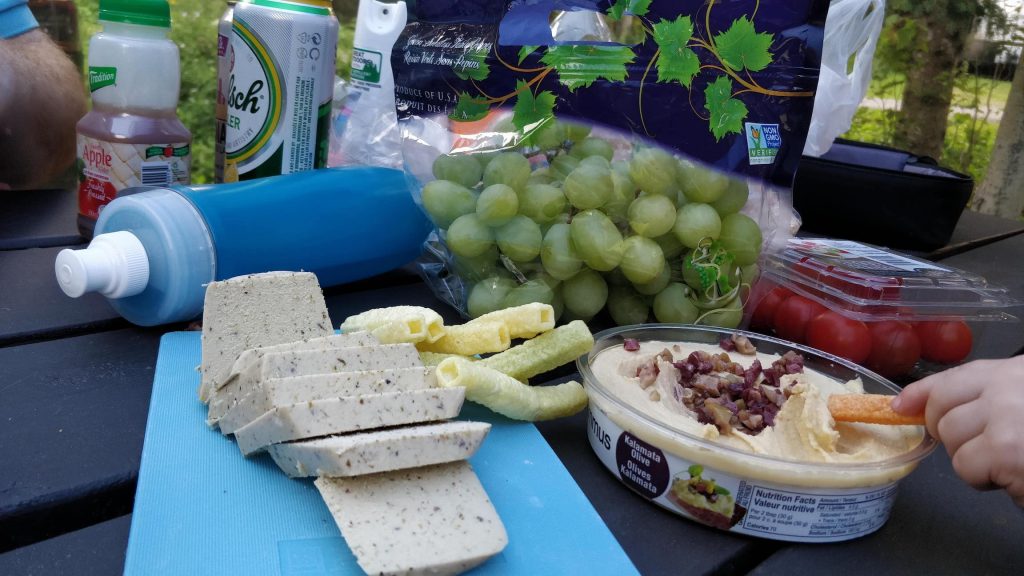 Not all of Urban Picnic jars were vegan – but there are two – the Maki and the Dragon. Both are clearly labelled on the front of the jar vegan vs vegetarian, and both are gluten free.

We spent one night in Forillon – and it was the first time our toddler had ever gone camping – he seemed to really enjoy himself and so did we!

I liked that Forillon had a place to shower, wash up, and eat at a community style cabin – I also really liked that I could charge my phone in there too while I was still awake after JC and the kiddo were asleep.