Niagara VegFest kicks off the Vegfest season for me. I realize there is the Toronto Raw/Vegan Festival that same weekend, but driving down to the Niagara VegFest is always a nice opportunity to visit a few spots around Niagara Falls, NY too. The nice part about our occasional drives down to southern Ontario and northern New York State is that St. Catharines and the route to it and the area around it has become so familiar (in a good way.) We knew there was parking near the St. Catharines Farmers Market building just down the street at this massive (and free) public parking lot (so if it keeps happening in the same spot, and you didn’t know about this, now you do!)

We arrived while things were already in full swing, and the first person I saw was photojournalist Jo-Anne McArthur at her booth with cards and prints of her incredible work. She was also selling copies of We Animals, which is a beautiful and incredible touching heartbreaking powerful book I’m glad to have read the night it was launched. 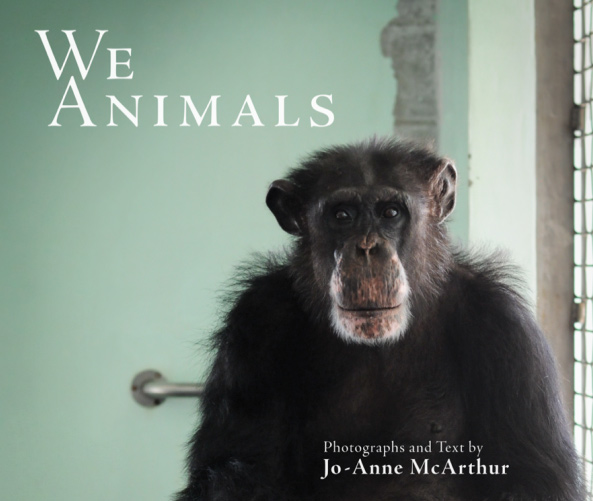 Jo-Anne is also working on a new project with Dr. Keri Cronin (who happens to be one of the founders of Niagara VegFest) that you should check out called Unbound – which is a  multimedia and book project that aims to recognize and celebrate the women at the forefront of animal advocacy – in both a contemporary and historical context. It’s a long term project, but you can follow along on facebook too if you want to. I know I am! 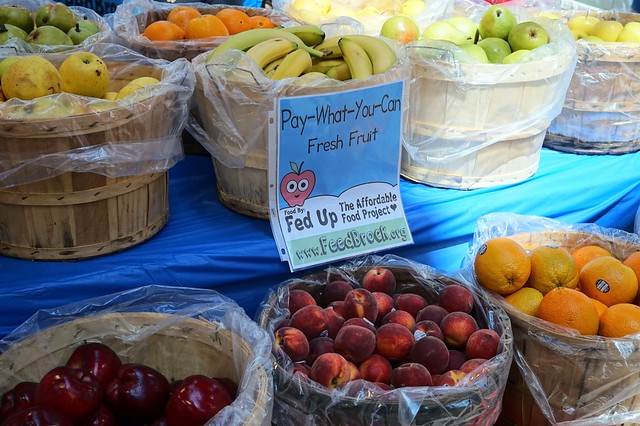 Another table that immediately caught my eye was Fed Up: The Affordable Food Project. And it’s not just because they had beautiful bushels of pay-what-you-can fresh fruit available. But because I really like what they’re doing, and what they’re trying to do. The Affordable Food Project was founded to help students eat well. And sadly, too many students have to choose between rent and/or tuition and being able to eat anything. I like that Fed Up spawned from a wave of student outrage, and turned into a student not-for-profit that offers several food services and community building activities for Brock students.

We stopped over at the Cedar Row Farm Sanctuary table for a bit to talk to Siobhan (one of the founders) and JC bought a nice Cedar Row hat, and I got a cute pig decal for our car. If you’ve never been to Cedar Row, I highly recommend it, especially on a volunteer work visit or on one of their upcoming open houses (The Next one is the Summer of Peace Open House on July 11.)

We walked by a stand with interesting looking cork wallets and belts from “Cork by Edwina,” but she wouldn’t permit me to take a picture of the bags, so maybe you’ll see her at a market around the Niagara area. This not being able to take a picture thing bothered me on the way out, because 1. I’m very lazy and would never make a bag myself. Ever. 2. I don’t understand why someone wouldn’t want their work online in general.  So here is a picture of the card I took with me. Buy a bag. They’re nice. 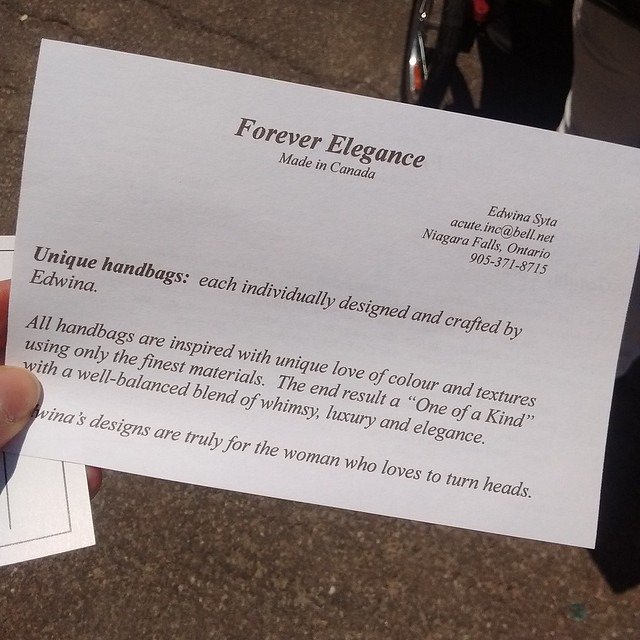 We wandered around two or three times, there were so many thing to stop and take a look at (as usual) but we opted to find something for breakfast/lunch. JC picked up a gluten free pizza from Blossoms Bakery. Which is a vegan-friendly bakery in Jordan Station, Ontario, and also the creators of Boo Moo vegan cheese spreads. 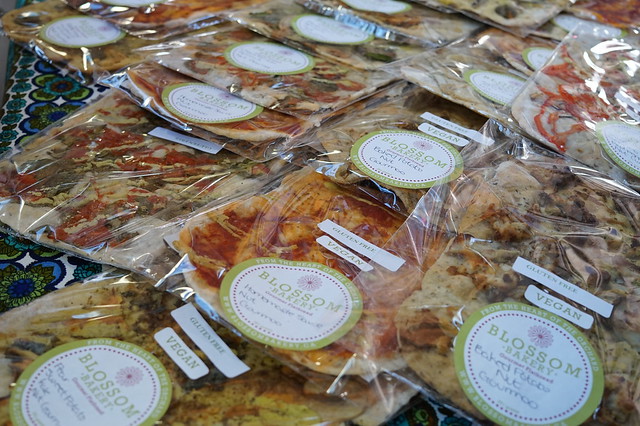 They were also making vegan s’mores sandwiches which we didn’t have, but they looked incredible.

There was even a mini torch involved to toast up the marshmallows. 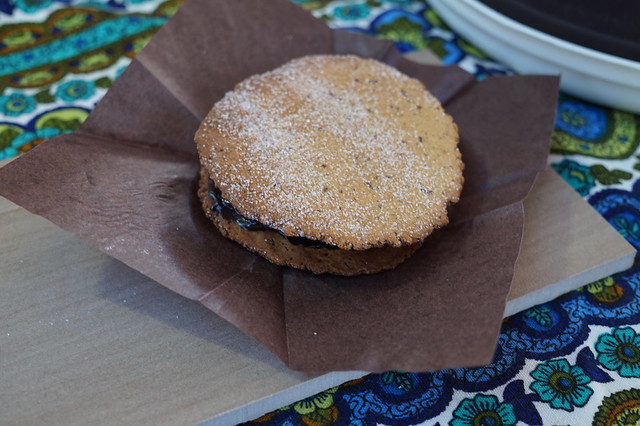 I ended up feeling more like drinking juice than eating anything – which was inconvenient at a Vegetarian Food Festival, but it happens. Luckily, Pulp & Press juice was there with a variety of juices – I wish there were samples, because I was curious about the red ones, but opted for a Hulk 2.0 because it’s hemp seed content made me feel like it was more of a meal and less of a drink. 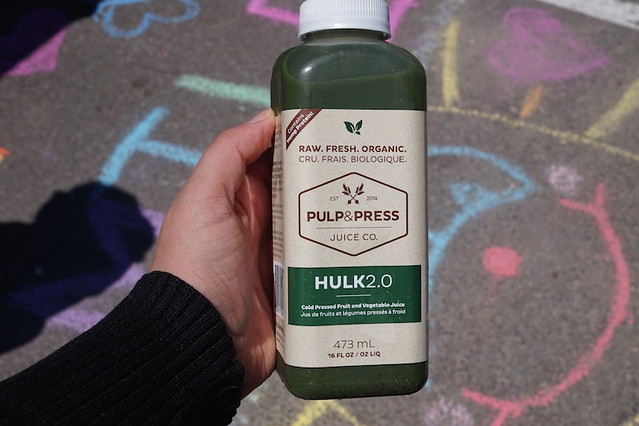 JC and I stood in line for Beechwoods donuts for about 15 minutes before deciding we should just try and visit them on some Saturday in the near future. Thankfully, we did get to try them at their official launch a few months ago, so we knew what we were missing out on! 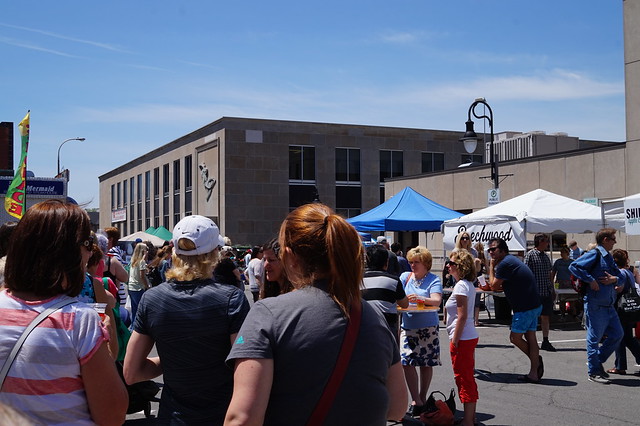 Overall, Niagara VegFest was fun, while we didn’t stick around for any of the speakers, they sounded like a great crowd. And we drove on to Niagara Falls and a stop over in Buffalo.

There are a great variety of VegFest coming up in Ontario in the next little while, and I’ve been collecting them on my event calendar as I hear about them.  If you have any I’m missing please let me know!