I started writing this at the airport after our trip down to ExpoWest – a massive natural products trade show and networking event in Anaheim, CA, and have continued writing bits of it as time has passed. Lots of time has passed – We were at ExpoWest early last month.

JC and I went last year, which lead me to post a three part look at some of the new stuff I got to see. We booked that trip in a last minute frenzy, I didn’t get much of a chance to look at some of the exhibitors I wanted to see, and there are thousands of them anyway. It’s hard to narrow it down – even with some advanced planning, it was still hard to take in everything (but I think we managed). 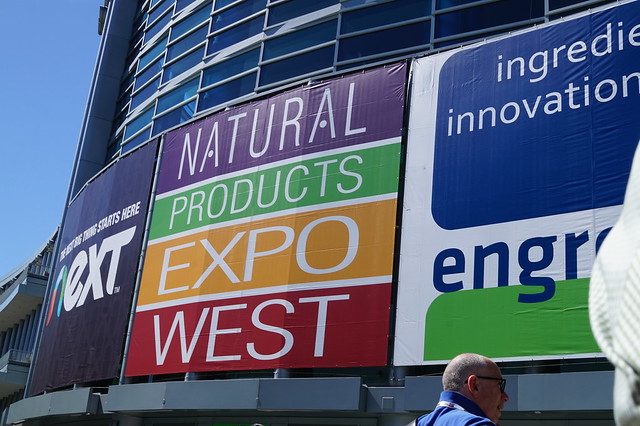 My angle is go super intense into exploring on the Friday, and maybe into Saturday – trying everything I see that sparks my interest (and generally avoiding the ingredients section until later in the weekend) then, I have the opportunity to go back and visit some of the vendors and creators that interested me the first time around and find out a bit more information from them. My usual questions – vegan? where is it made? when/if it will be available in Canada? And whatever else they want to tell me.

I attended as a retailer last year, and press this year, and it was a slightly different experience, but still generally pleasant. On the bright side – this year, I was rarely ignored, people were friendly, and I experienced less misogynistic assumptions (last year one guy hawking maple water assumed I was JC’s assistant or something. And you better believe I will never buy that particular maple water again…) I met a lot of interesting people from around the world – creating interesting products. Some of with them established brands that I recognized immediately, and some were just starting out. I liked visiting some of the less flashy booths, and I loved heading up to the zone with all of the new and recently launched businesses. 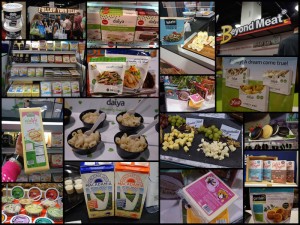 In typical fashion I posted about everything immediately on Facebook, but a more detailed conversation fell by the wayside. Until Now!

A few highlights for me: 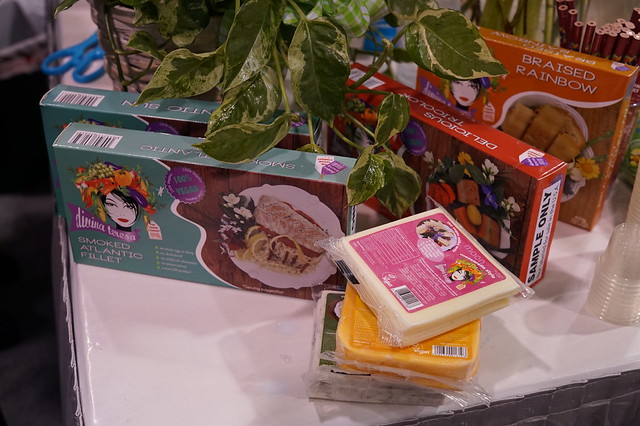 This was one of the first new things that really stuck out for me. Devina Teresa, a vegan company from spain, was looking for an american co-packer. They had a few samples available, and the fried “smoked atlantic fillet” just blew me away. 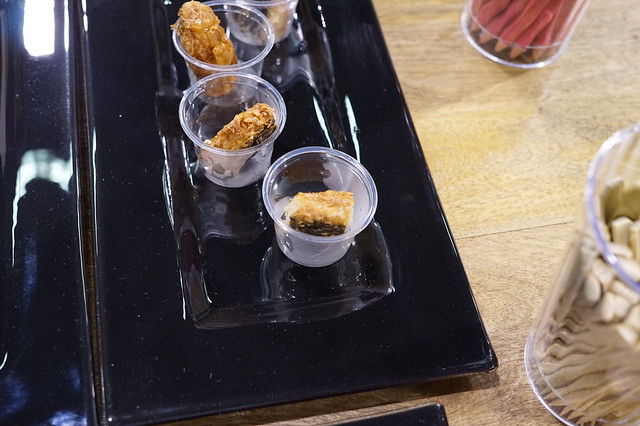 My only regret is I didn’t go back there to try more. Hopefully they were successful in finding a co-packer or distributor in North America, or will find one soon. I’d love to see this product on shelves. 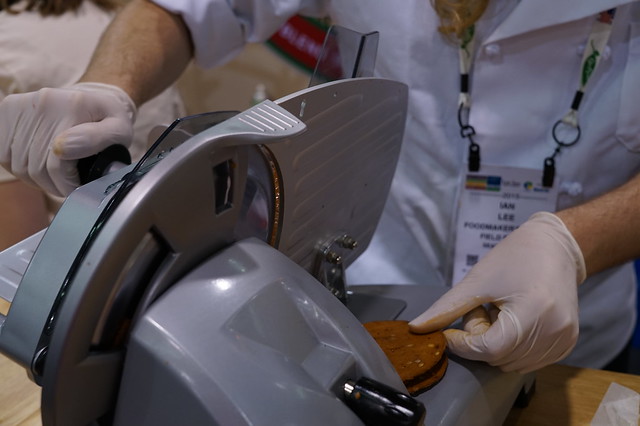 As we’ve all heard now – Field Roast is coming back to Canada. They sounded genuinely optimistic at ExpoWest. I’m glad and impressed that they didn’t compromise their values, and helped launch the Plant Foods Council in Canada. 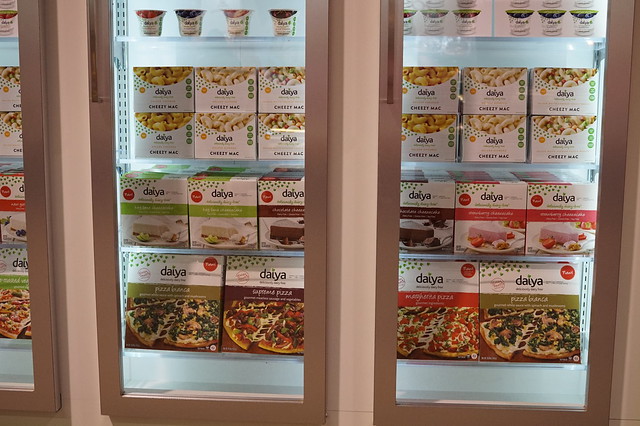 Daiya really kicked it up a notch this year with several new (and super exciting) products. Prime item for me was their new Packaged Cheesecake which I will review in more depth soon (but in short – the New York cake was especially tasty.) There were four flavours of cheesecake – Chocolate, Key Lime, Strawberry and New York Creamy. 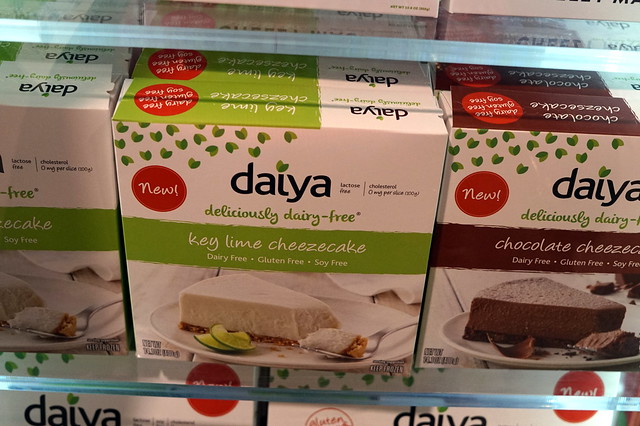 I think what made this product extra exceptional is that it was gluten-free but the pasta was really good. Like not gluten-free good, but just good. The shift with gluten-free goods continues, and I’m really happy for my celiac pals, and also for the rest of us who aren’t gluten-free but eat dairy-free foods that happen to check off a few of the allergen boxes. 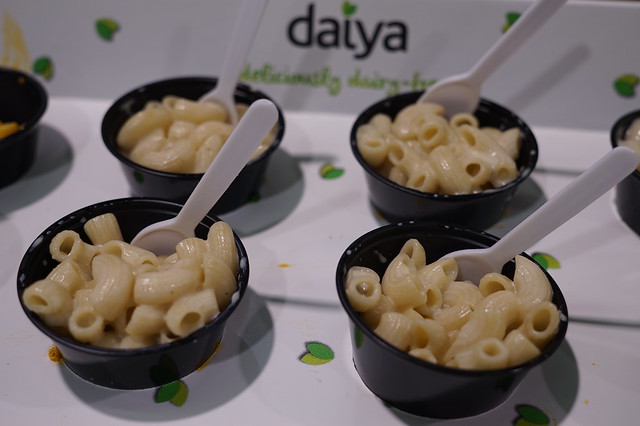 With the recent announcement that we’ll be losing WholeSoy entirely, it’s also nice to know that Daiya is getting into the yogurt game. Four of the usual fruity yogurt flavours – strawberry, blueberry, peach, and black cherry. 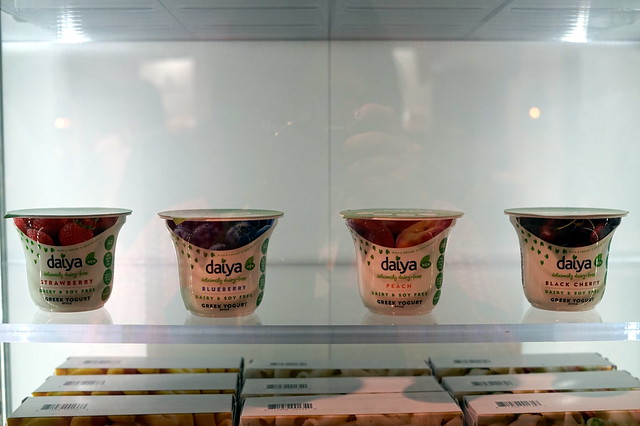 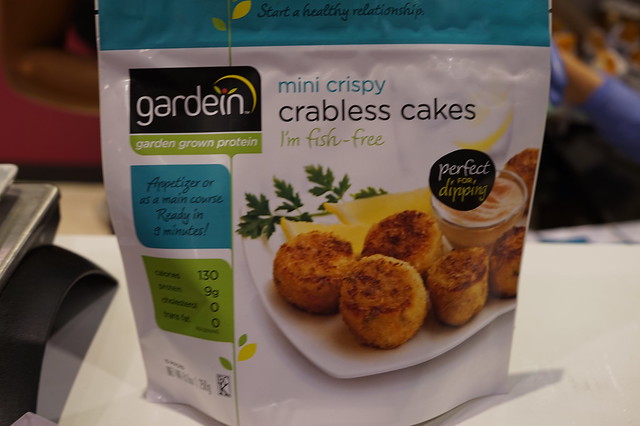 Much like last year, Gardein brought a powerful punch to the show, they had packaged crab cakes, and really incredible grab and go pockets meals (that if you live in Western Canada you can already find the pocket meals at Save On Foods locations and maybe more – but I haven’t seen them in Toronto yet.) 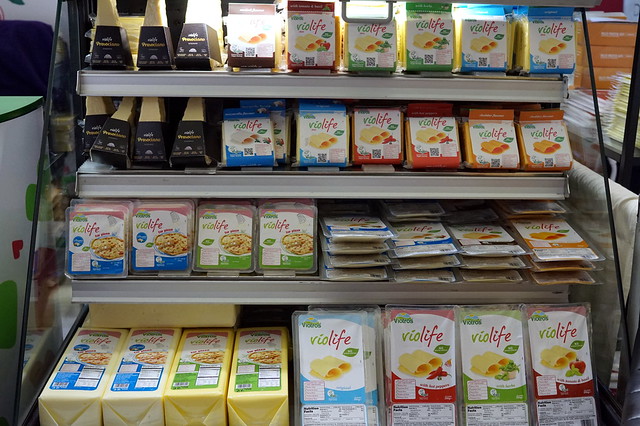 VioLife The Greek Vegan Cheese I keep hearing about on facebook groups and European friends – they want to be picked up by an American distributor. Violife has a great variety of products, flavours and I think they’d be an asset to the vegan cheese scene. Hopefully they can get something going in our fair country, or at least somewhere in North America. 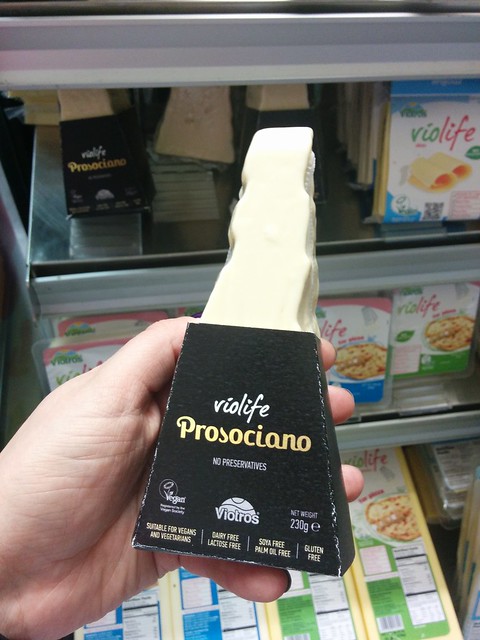 JC commented that the Parmesan – Prosociano was very much like the real thing – though I wasn’t a fan. But I’ve never had “real” parmesan, so I’m not really the target. 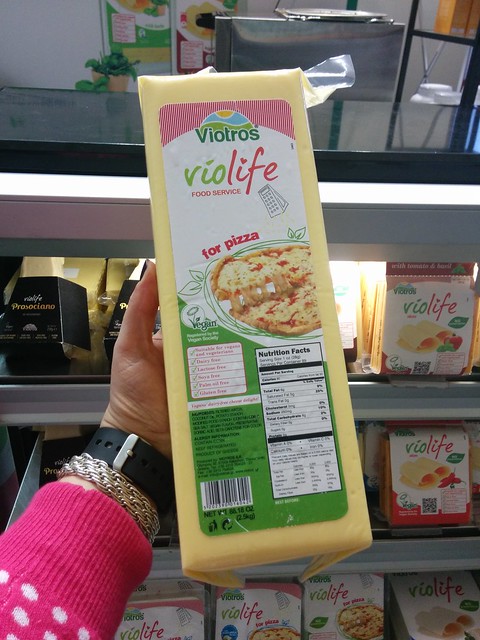 What I did like were their cheese slices, and dreaming of running away with a giant 2.5kg block of Pizza Cheese and taking it home with me. I’ll probably be running a VioLife Giveaway in the next week, so stay tuned. 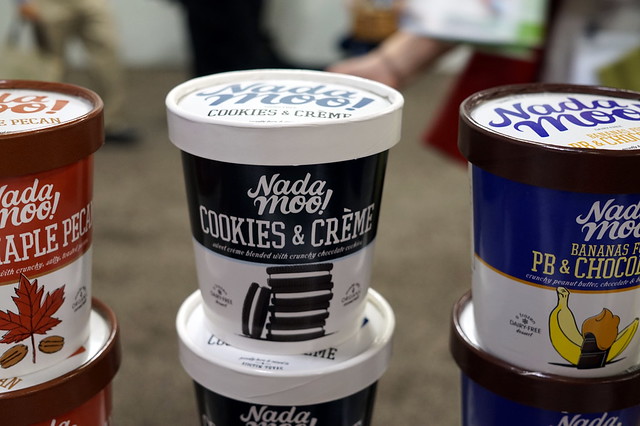 Came out with an absolutely delicious series of flavours and great new packaging. Nada Moo! is available on the Canadian west coast, and I’m dreaming of the day we get it in Toronto. They have a fantastic variety of flavours and the texture is perfect. It was one of my favourite finds when we were travelling through the USA this past summer, but wasn’t easy to find. 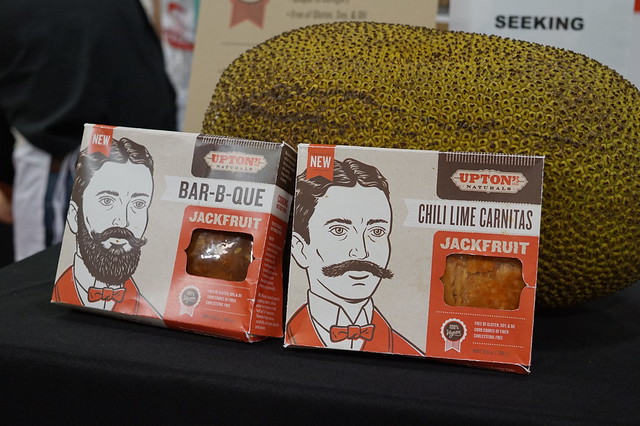 Does jackfruit frighten and confuse you? Do you find yourself doing an internet search to find out whether you should get young or old or canned or fresh or whatever else there is? Upton’s Naturals has you covered – assuming you live in the USA – though I hope that they will make the jump over to Canada. 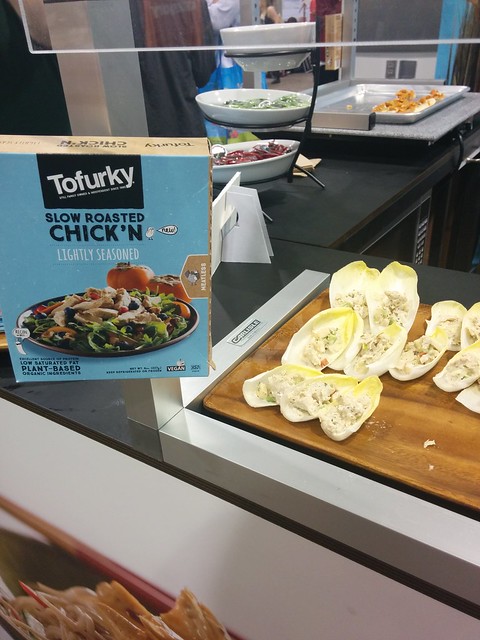 This will appear in US stores in a few months – Other flavours in addition to Lightly Seasoned were Tandoori and Thai Basil. They also have additional flavours listed on their website – BBQ and Sesame. 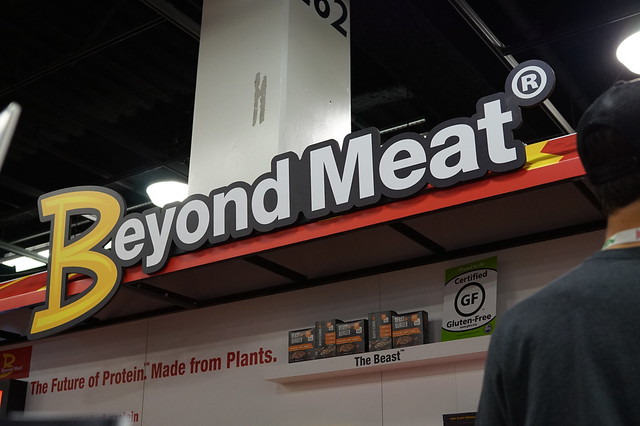 Beyond Meat launched their Beastly Sliders and Beyond Chicken breaded chicken strips with their usual fun marketing style – people flocked to their MacDonald’s inspired display booth. They were both great, though my favourite had to be the new breaded vegan chicken strips.

After the show we went to Viva La Vegan Grocery and bought some of the chicken strips to take home. 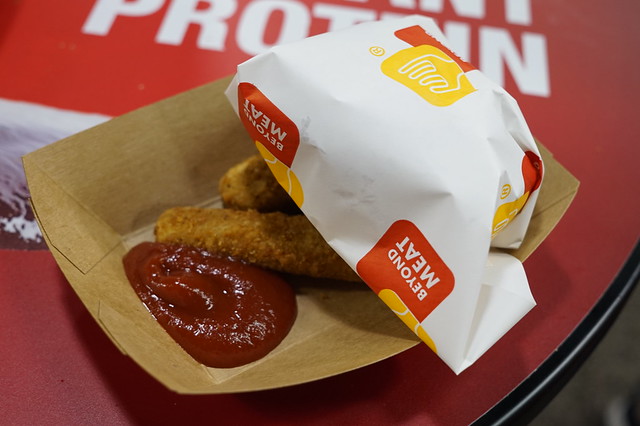 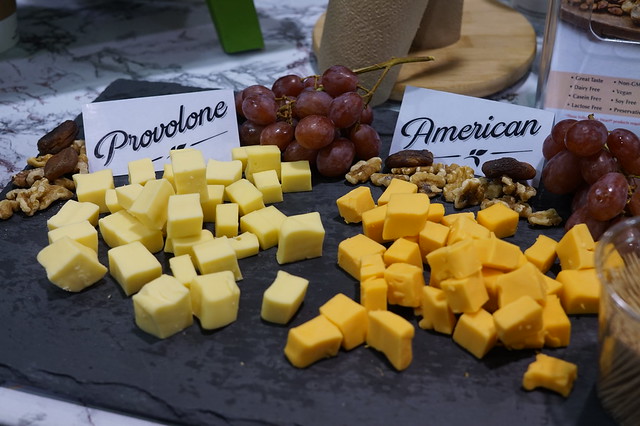 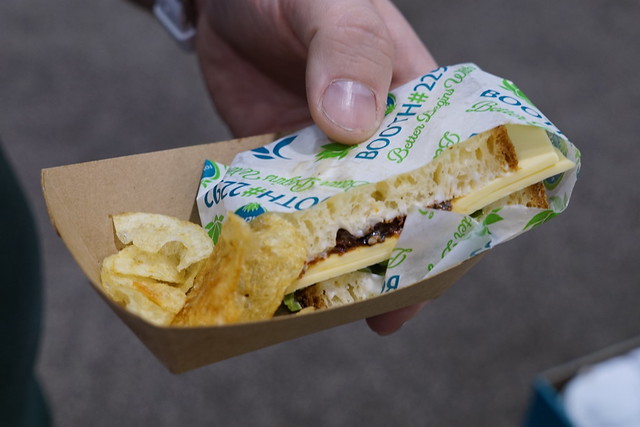 They served them in tasty sandwiches and in cubes so we could really try the cheese in a variety of forms. These should be on shelves now. 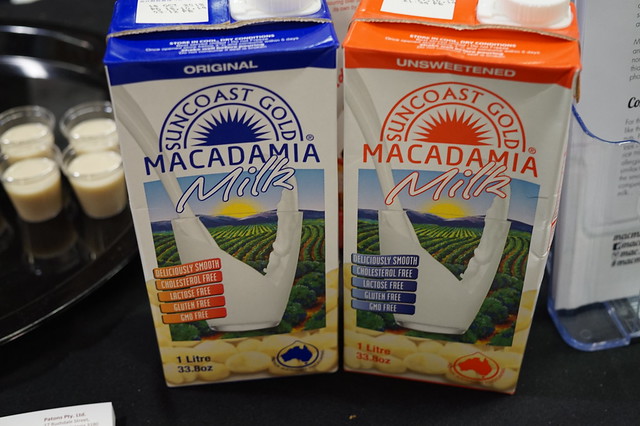 Suncoast Gold launched a Macadamia Nut Milk, and I tried some of it – it was not as rich as I expected, but still had a nice flavour and texture. They are ready to be available in Canada complete with packaging that meets our nations requirements. 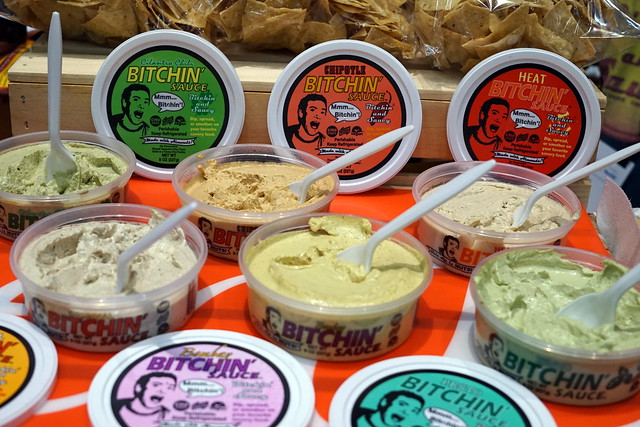 These were great – made with almonds, and had a nice variety of interesting flavours. They were open to Canada, but were not set up for it yet – currently Bitchin’ Sauce seems to be spreading Eastward (via west & central Whole Foods locations) and available at various locations mostly in California. 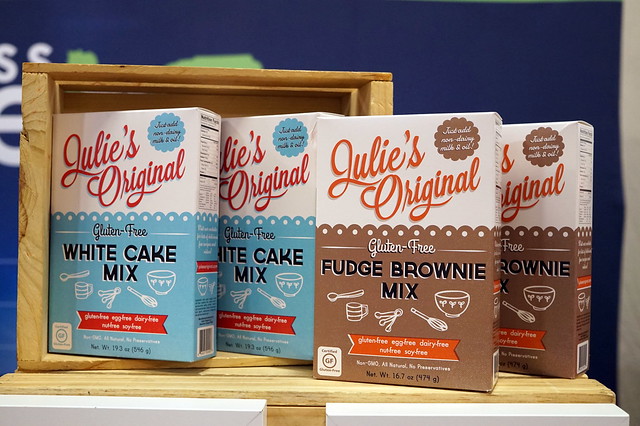 Julie’s Original Fudge Brownie Mix was my absolute favourite, and I’ve made no secret of my general gluten-free baking ambivalence. But this was exceptional. These are at certain locations around Portland and San Francisco, but currently are primarily orderable online. 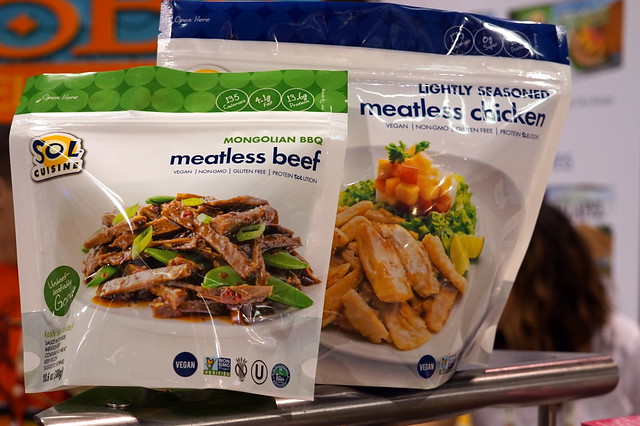 The new Mongolian Meatless Beef and lightly seasoned meatless beef strips from Sol Cuisine – both were great options, and I liked them more than a few of the other Sol Cuisine meatless meat strips I’ve had in the past. Since Sol Cuisine is a Canadian company, we’re likely to see these sooner (I hope.) 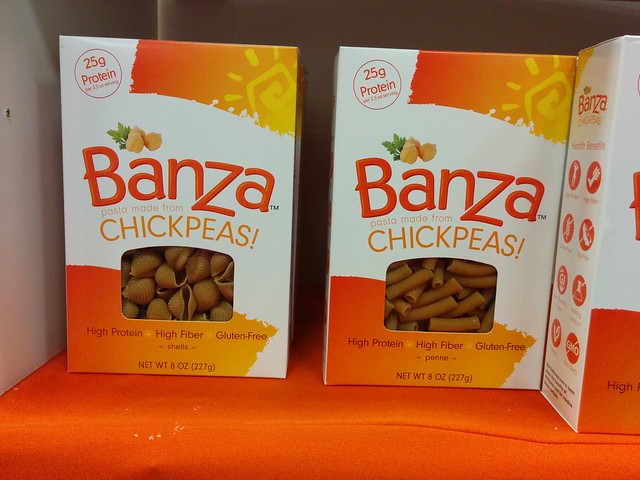 This gluten free, vegan, high protein pasta hails from Detroit – and is actually really good. We sampled some of the pastas from Banza, and it was impressive. Texture was closest to non-gluten free pasta, but with a pretty significant protein boost.

So, what sticks out for you? Have you seen any of these in stores yet? Which ones are you most looking forward to seeing available locally?