After our fun but brief camping time at Fort Custer Recreation Area we drove on to Chicago in a couple of hours. I plotted the course to the Chicago Diner in the Logan Square area because we had a few hours to go before our AirBnB in the Pilsen neighbourhood would be available, and we both skipped breakfast. The Logan square area offers some wandering potential too, so I figured we could poke around the area after lunch.

It’s a beautiful restaurant with solid oak tables and benches, and reclaimed wood from the neighbourhood. It was interesting reading about the beginnings on the Chicago Diner blog post from a few years ago, because it gave me a greater appreciation for what they were trying to do with the space. Apparently the building is LEED certified (which is no small feat) and generally tries to be more environmentally friendly.

The host/bartender was super friendly when we walked in, but our server seemed stressed out and exhausted. That said, this didn’t actually impact service much, and we were mostly left alone to eat in peace, which was good. When we’re travelling, it’s always worth remembering that while we’re excited and keen on a place, it’s ultimately just a restaurant. Where people eat. Local or otherwise. Not everyone needs to appreciate or mirror our excitement. It’s just food right? (seriously) 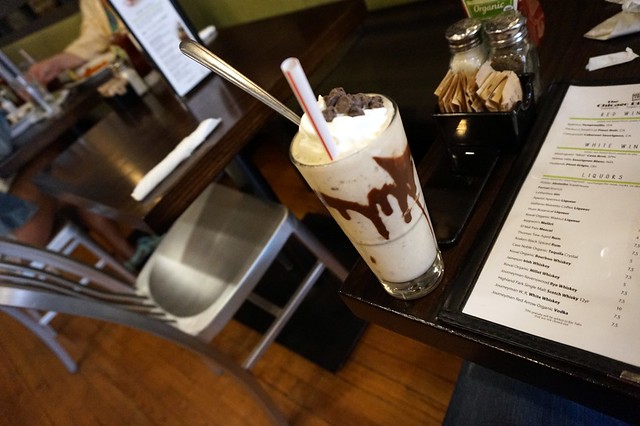 We started with one of the much recommended shakes, and ordered one regular sized chocolate chip cookie dough shakes, intending to share it. The sharing part didn’t work out quite as well, so JC ordered one for himself (but he got the one with peanut butter.)

The wings seemed like a good idea, and they were. Whenever we get wings, we’re always expecting a small portion – and usually those expectations are met – Chicago Diner exceeded that. Loved the density of these. We didn’t get a picture. 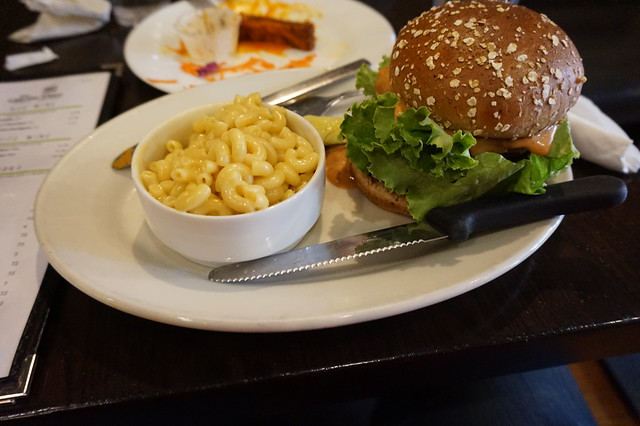 JC got the burger. A massive burger. The Titanic BLT Burger. A seitan patty topped with seitan not-bacon, french fried onions, lettuce (I don’t recall if it was iceberg), tomato, and something known as “chipotle fire sauce”. I had a few bites of this, and it was tasty tasty. But massive.

I got my order-every-time-i-see-it reuban. But this reuban was a Radical Reuban, which probably makes it more delicious. When in doubt – order the reuban (or at least that’s what I’ve been doing.) Thinly sliced corned beef seitan, grilled onions, peppers, sauerkraut, vegan thousand island & some kind of vegan cheese on a perfect marbled rye just confirmed that for me. 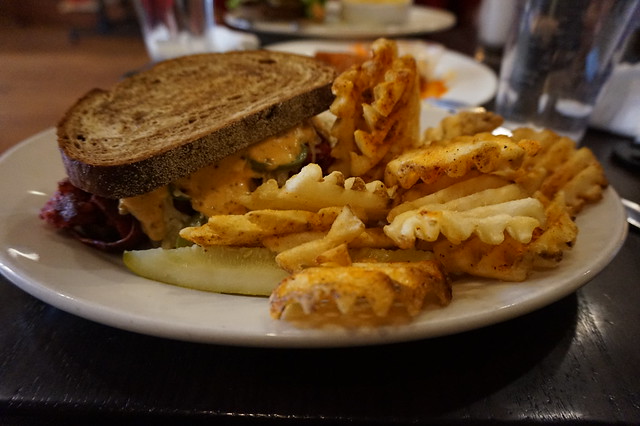 This is one of the best reubans I’ve had in a long time. The texture of the seitan was fantastic. Flavourwise it depends mostly on the other ingredients, but that worked. Creamy thousand island dressing blended with the salty sour sauerkraut, and managed to hold its own despite the sauciness.

We had a great time, and would have been back again if time would allow for it. Maybe on the drive home in a month!

Around the corner there is a great little coffee shop and coffee roaster called Gaslight Coffee roasters where we sat and drank fantastic soy lattes for a few hours and took advantage of their wifi (with a hilarious password) to plan the rest of our time in Chicago.