Beautiful food at Ursa in Toronto

We finally checked out Ursa after many months of thinking about it, but failing to make it happen. It’s close to our old house, but it took a spur of the moment decision after last Friday’s Bit Bazaar party at Bento Miso to actually eat at Ursa. We were drawn in by promises of their homemade silken tofu, and at least one vegan entree on the menu.

No reservations, meant we had to sit at the bar, which, to me actually seemed like a great thing. A beautiful wood table, well lit, a full view of the space and what was happening in the kitchen, with the added bonus of having the friendly bartender nearby to take our order. We started with drinks. An Anchor Steam for JC, and a Ursa Cocktail for me. I ordered the Ursa Cocktail solely because it said it was inspired by “The Toronto” the mythological cocktail that I haven’t seen on menu anywhere. And I was delighted.

I love when it’s obvious people take creating food and drink seriously. The bartender at Ursa (it was Robin Goodfellow the night we were there) really takes it seriously. A drink becomes art, and flavours become meaningful and worth mentioning. As a creep sitting at the bar, I watched him make several drinks, and every time, the attention to detail, the ritual of creating was there.

It set the stage for the rest of the evening, because as I’ve found with most places I’ve eaten – if you take drinks seriously, the food is going to be beautiful and amazing, and if there is one thing I like more than most things it’s eating beautiful food. They started us off with a veganized amuse bouche of some kind of radish citrus magic (not the actual name.) as the regular amuse bouche was some fish containing thing. It was nice of them to make something fun and, I imagine, spur of the moment. As our appetizer we opted to share an order of the Ursa-made silken tofu, shaved pine mushrooms, delicata squash and a smear of yuzu kosho. My only regret is that we opted to share it, and didn’t each get our own. I also wish there was more yuzu kosho, but that’s just something I’m going to seek out for myself now.

Yuzu kosho is a type of Japanese seasoning made with a fermented blend of chili peppers, citrusy yuzu peel, and salt, and it tastes powerfully savoury. It tastes like what you’d expect from a chilli based spice – complete with the typical chili pepper escalation of heat on the tongue, but where the peak turns into an intensely herb-y flavour, instead of hot, you’re left saying “SAVOURY. THIS IS SO SAVOURY.” (Okay, we didn’t – but could have) Next came the vegan item on their short seasonal entree menu. The Cashew Foie, with pumpkin, quince, on top of a grain risotto and a hops based foam. They stressed that the hops used to create the foam was grown on their rooftop. I started to vaguely recall that they focused on “sustainability,” local food, and seasonal offerings.

The Cashew Foie was tender, the disk of cashew didn’t scream cashew, but it also didn’t say foie (aka liver) either thankfully. A seared medallion (yes – a medallion) of cashew based magic. It had a rich flavour and unique texture. 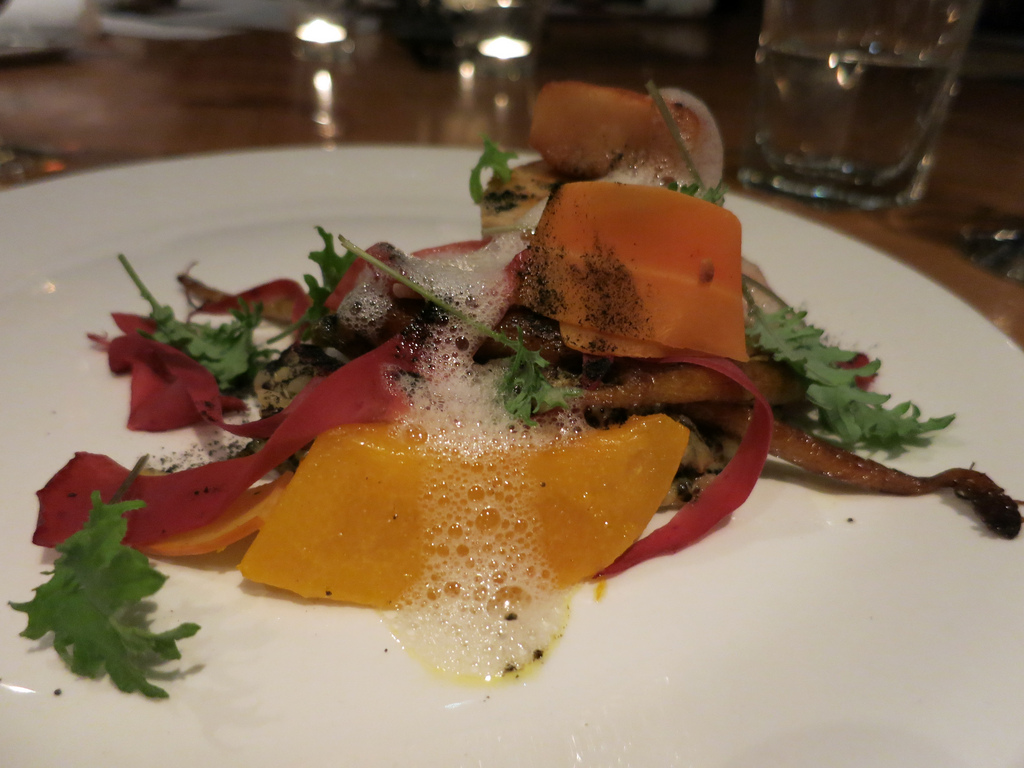 I overheard the bartender/manager mention that the menu changed regularly. I had to take a dozen photos before I ate it. If you get chance, try this. It really is delicious. But know that like most beautiful food, it is not inexpensive.

The experience at Ursa was nice, we skipped dessert, and walked over to Boreal Gelato for dessert (they have the most divine vegan salted caramel gelato if you haven’t tried it yet).

But no, this is not a real review of Ursa, but it is an excuse to share pretty food pictures.