Rosalinda opened earlier this year in May, and I’ve been a handful of times. Sometimes just to grab a snack and a drink at the bar (totopos!), sometimes with friends, sometimes on a date, sometimes with a group. It’s good for all of those things. And Rosalinda has turned into one of my favourite fancy-casual type places in the city.

Seating is ample (138-seats) – the space feels huge – especially by Toronto restaurant standards. If you go during the day, it’s full of bright natural light, and a mix of pretty green fake and (maybe?) real plants throughout the space. Lots of windows, lots of intimate corners to sit in. They have these great mini booths for two people, and bigger booths at the back, and I feel like the seats are well spaced.

Last month someone I knew sat next to me, and we were spaced far enough away that we didn’t realize it until one of us got up and came back.

The food is always good. Every time. I’ve never had anything that I felt wasn’t well thought out – though I don’t love everything, that’s personal preference, not poor execution. At this point I’ve tried most of the menu, and I find myself gravitating towards the same things.

My favourite appetizers to share (or not share) are the mushroom potato flautas and the chilaquiles rojos. Over and over again, these two have stood out. They’re both beautifully spiced and flavourful with a great combination of textures.

I’ve got my heart set on making some chilaquiles at home sometime. 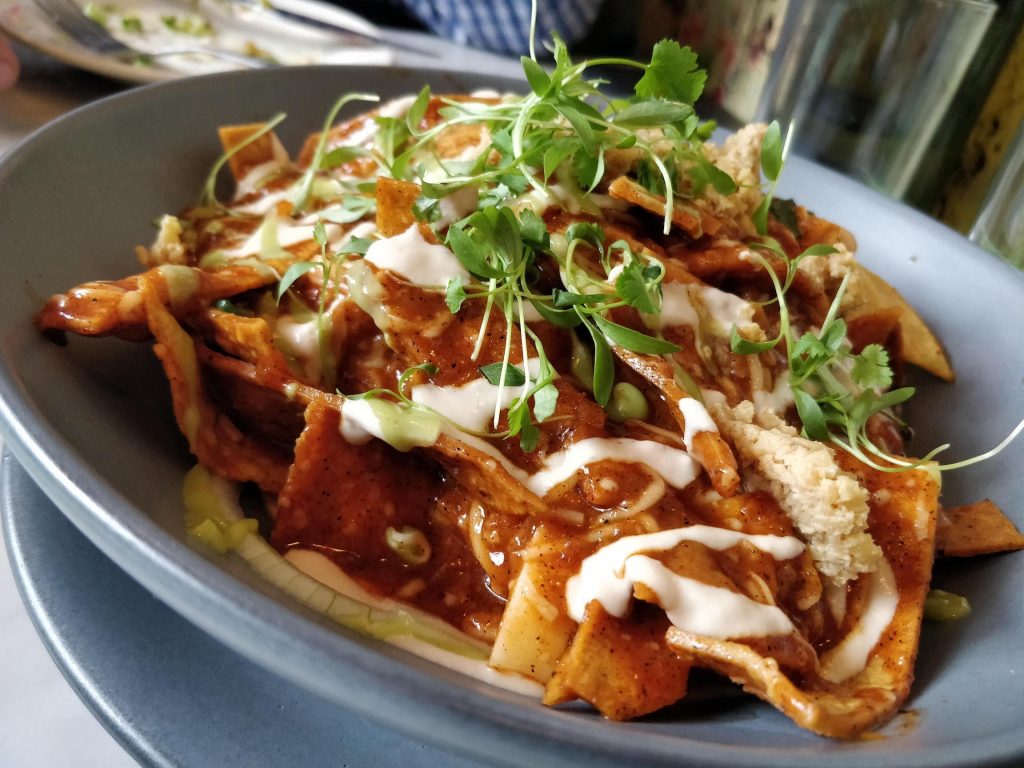 The flautas are crispy, stuffed with mushroom and potatoes, drizzled with a cashew crema, and topped off with a fresh savoury cilantro slaw, and resting in a poblano salsa. Yum. 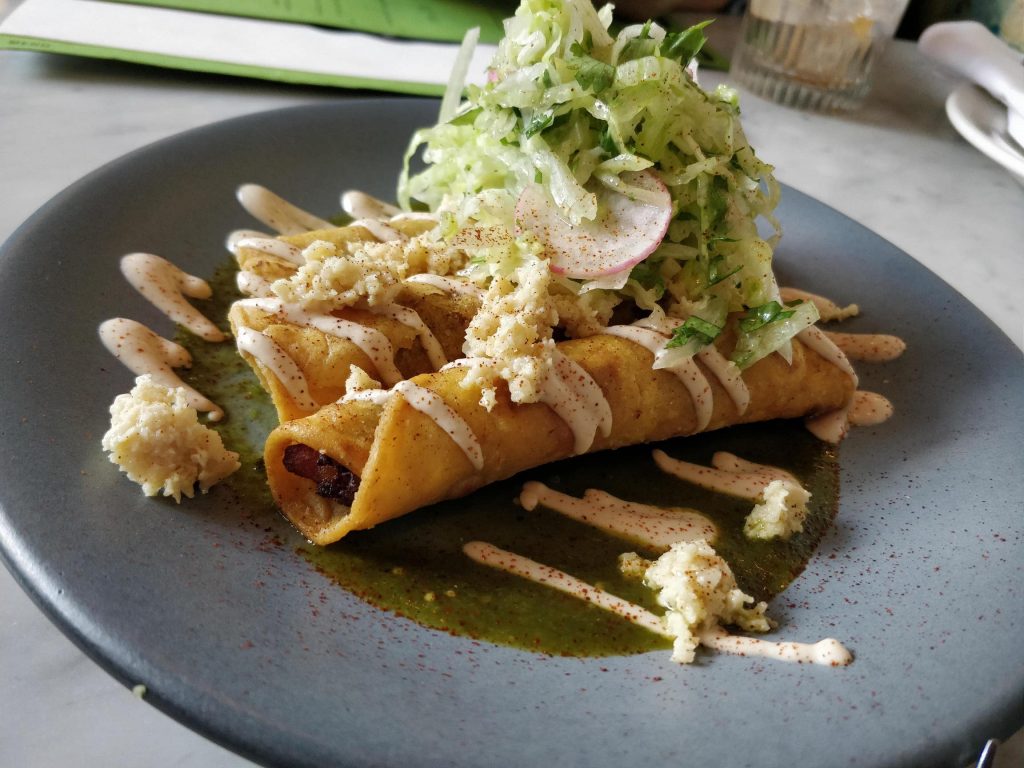 We also had a couple of tacos to share. I’ve had the oluqueno-style smoked onion tacos before, and they are also quite delightful. 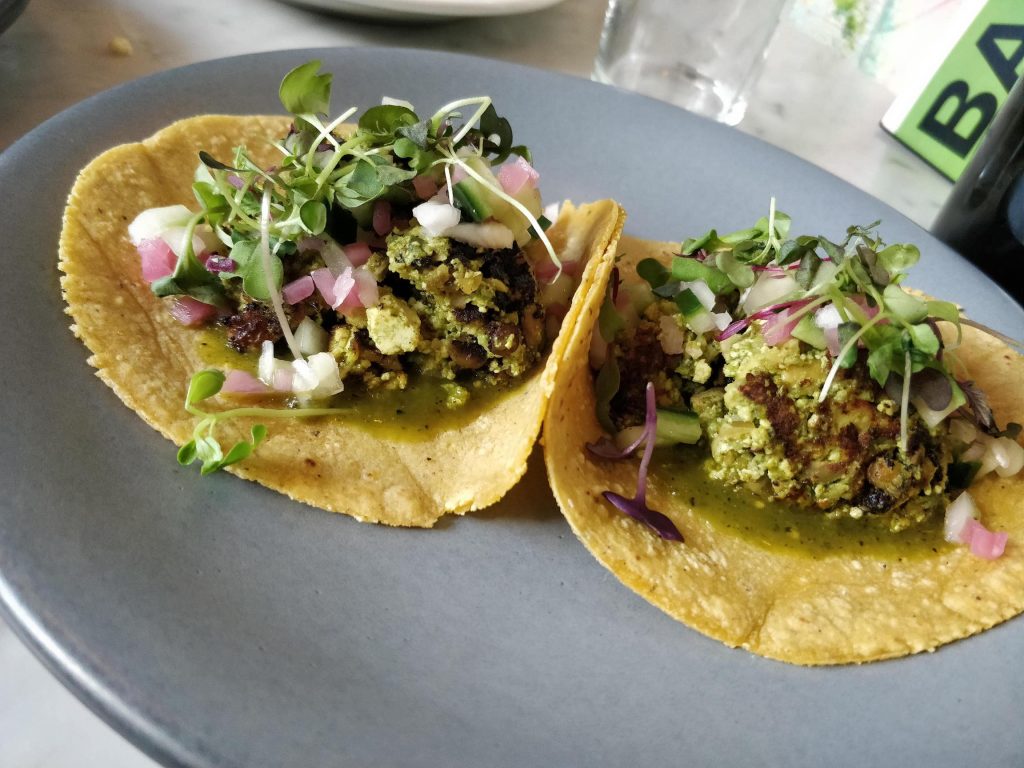 With poblano tomatillo salsa and cucumber pico de gallo. This was a super delicious and spicy taco – made with crumbled tofu, and topped off with cilantro sprouts. 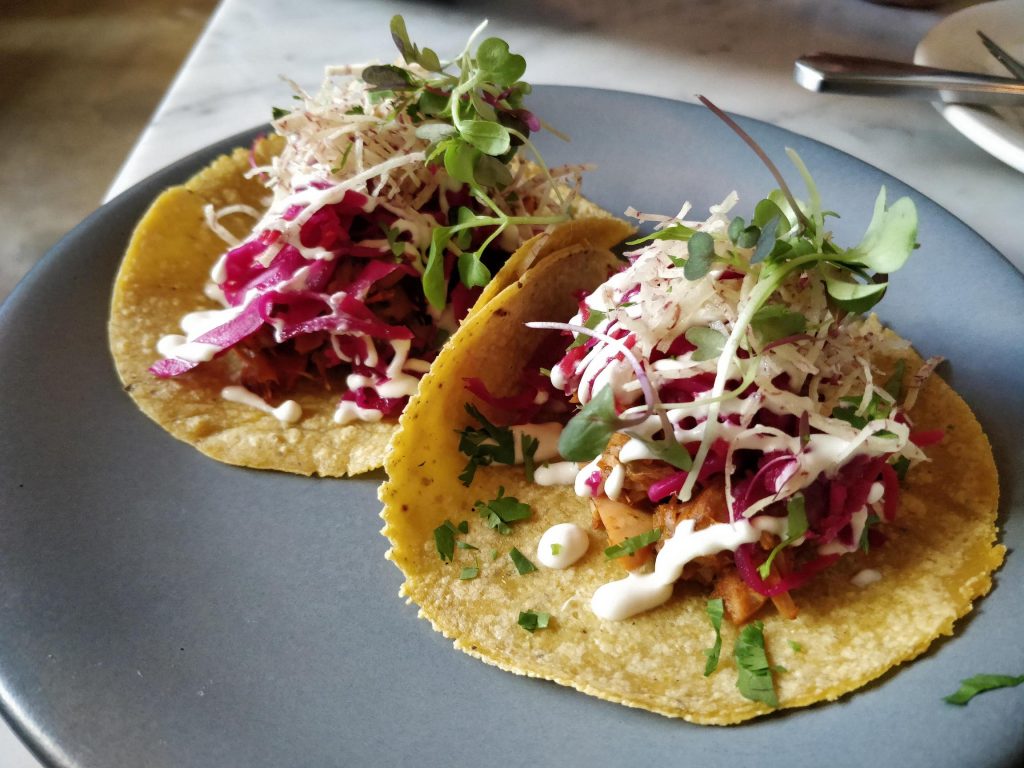 The jackfruit is marinated in citrus, and topped off with slaw. 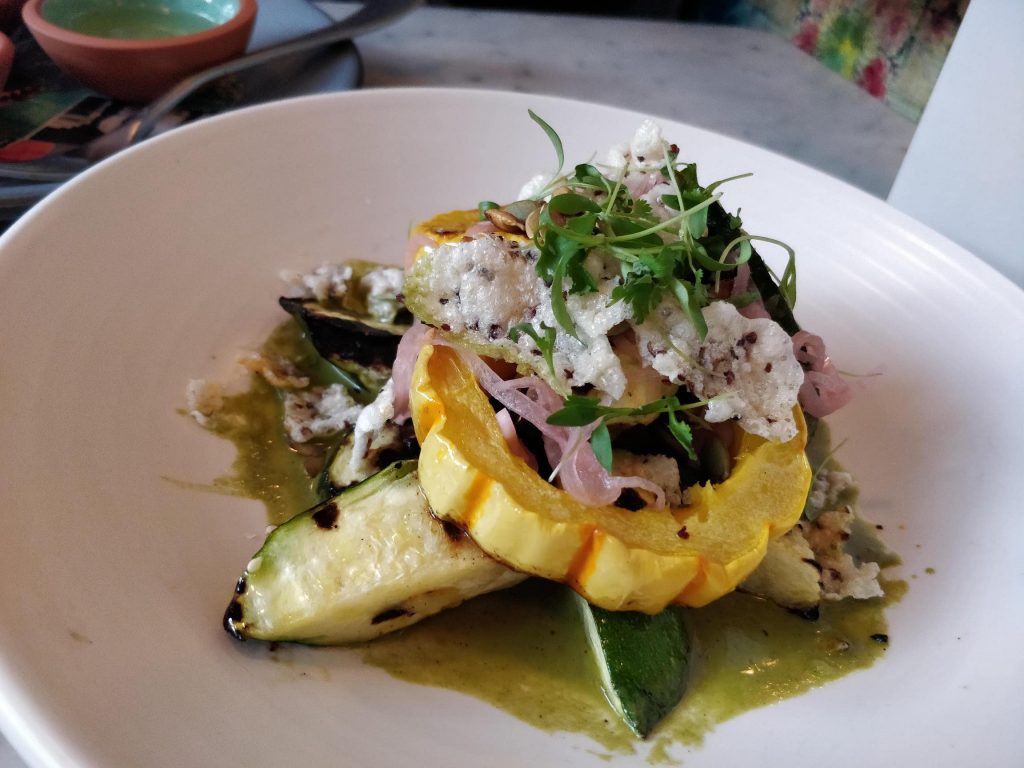 Mixed Squash with pipián verde (a sauce made with pumpkin seeds) and puffed grains (which I believe are also the same as their chicharron, but crumbled.)

Spicy roasted carrots  a with mole almendrado and a sprinkle of sesame. 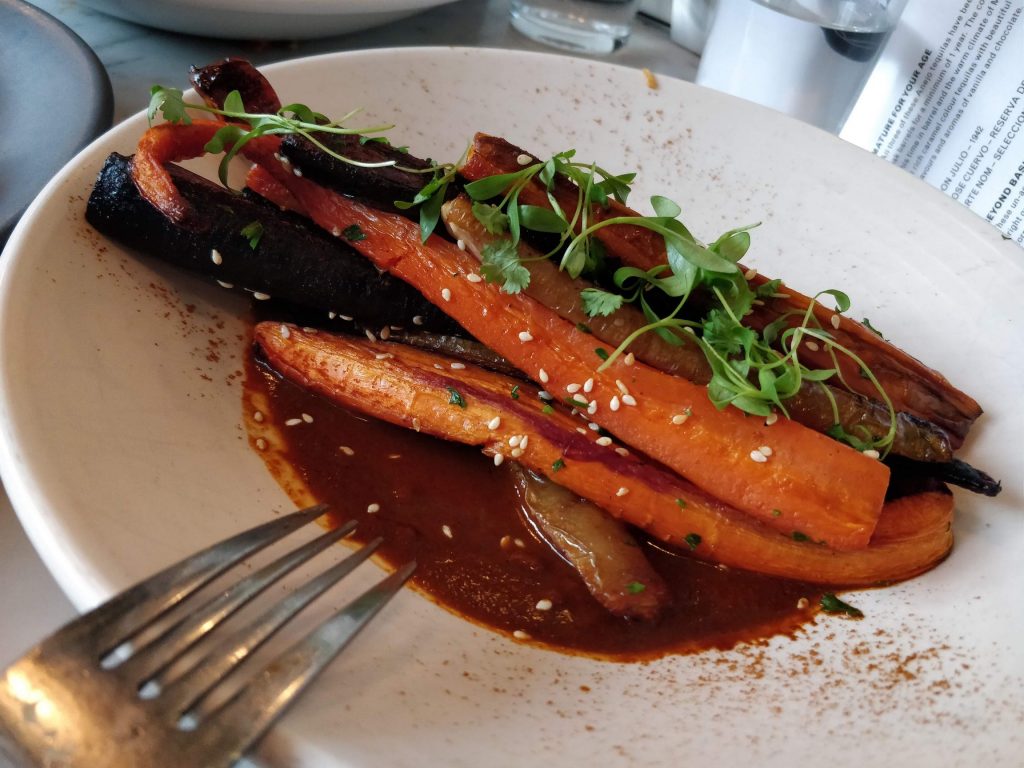 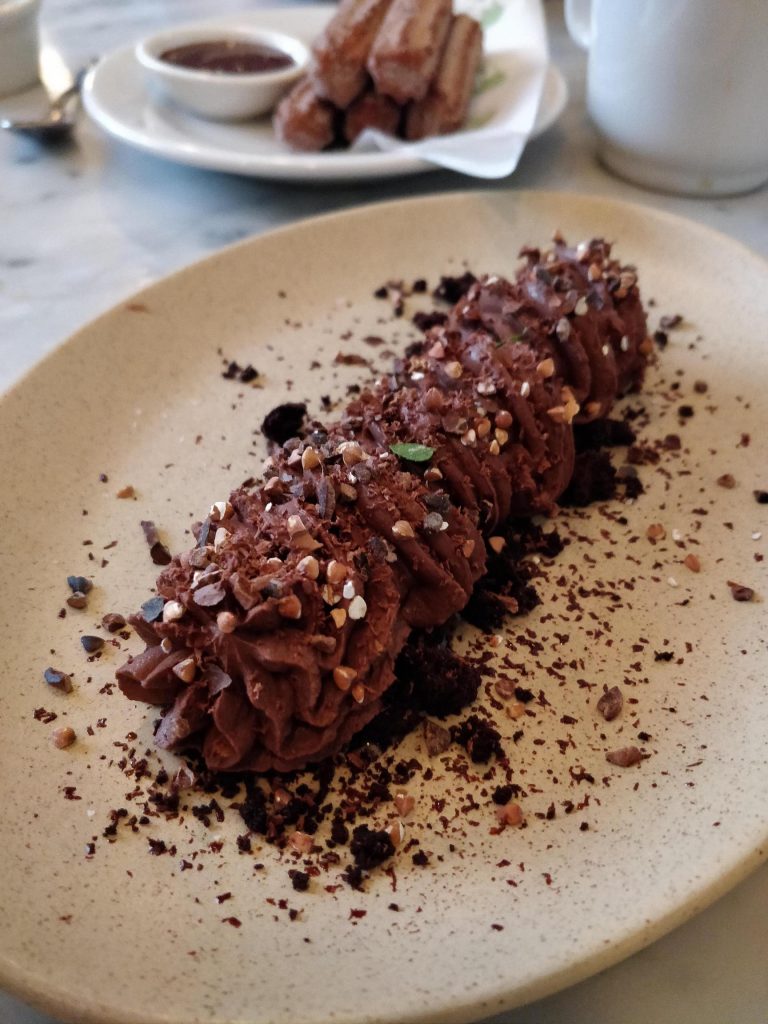 We also ended up with several plates of Churros, and almost ended up with more. It was just plates and plates of churros. Which was funny, because the churros are basically the only thing I’m not super excited about. Go figure. JC is quite into them, so don’t worry churro fans, they were not wasted. It comes with a banana caramel for dipping. 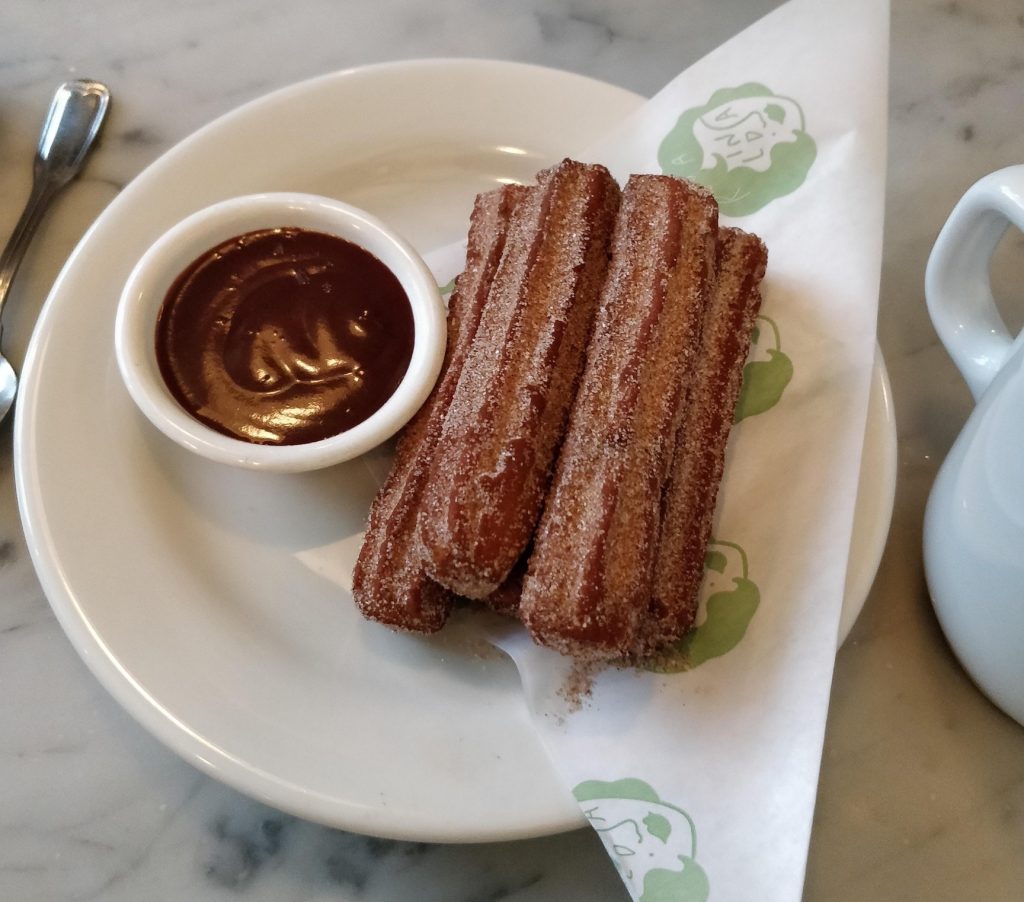 I’ve had a bit of everything over the last few months. 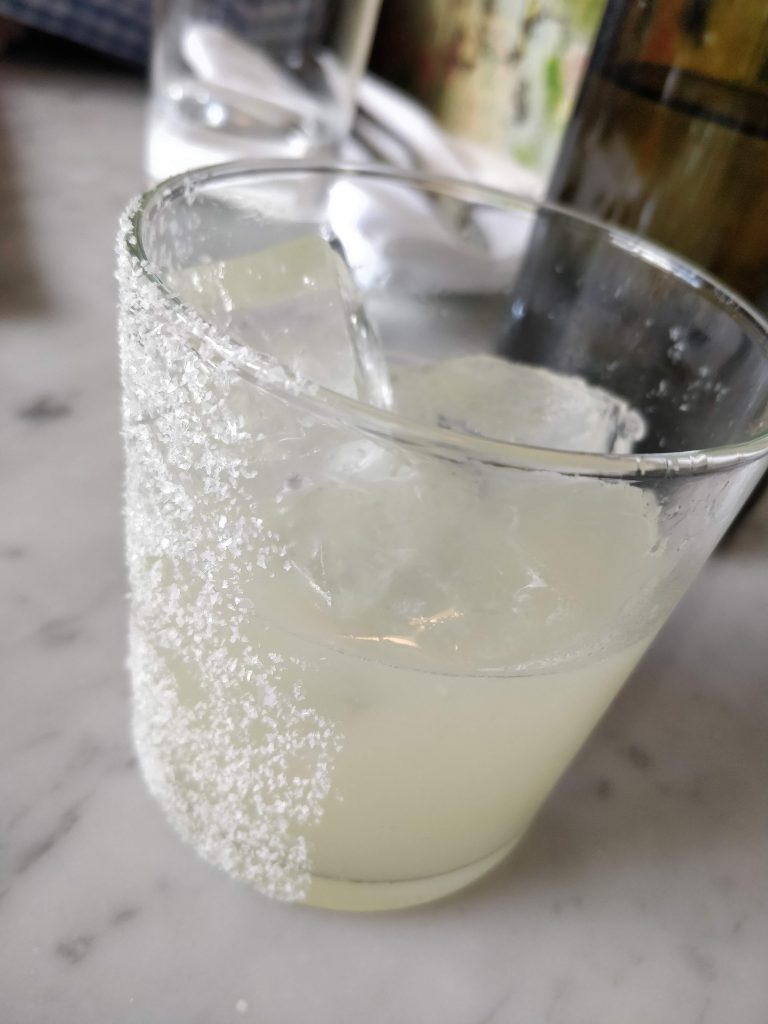 They have a variety of drinks, alcoholic, non-alcoholic, coffee, juice, nice sampling flights of tequila and mescal, and an ample wine list. 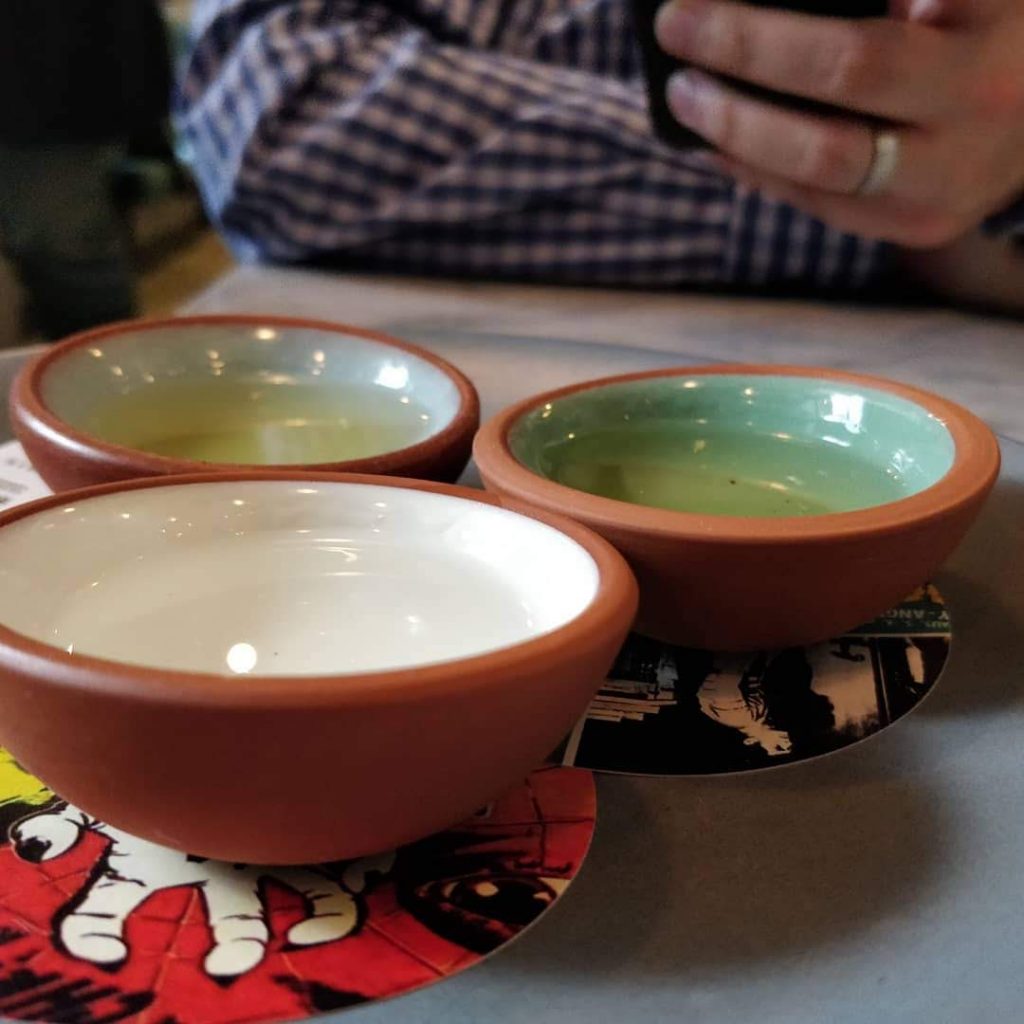 The flights of mescal were my favourite – and came with slices of oranges and chili salt.

So anyway, we’ll be back.

Have you been to Rosalinda yet?

p.s. they have a limited takeout menu posted on their instagram stories.
p.p.s watch out for the super heated vent outside, phew.
p.p.p.s they have a burger, I’ve never had it, but people always seem to order it a lot.