Thursdays are giving me a lot of fodder for TILT lately. Tonight is Recipe for Change, and I’m excited to have the opportunity to eat great vegan food, drink my fill of coffee and lemonade (and maybe some wine…), all while supporting a great cause. As usual, I’m also really looking forward to taking pictures of everything. It’s a great opportunity to talk to chefs and other food people interested in food literacy, who in many cases, are also interested in ethical food procurement and production. 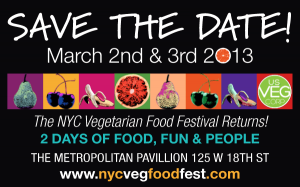 As if Recipe for Change wasn’t an exciting enough addition for the week, earlier this week I received an email from JC. It said – “Do you want to go to New York for the Vegetarian Food Festival?” As if that’s even a question – of course! So, we’re heading over for the weekend, to eat and visit the festival and hopefully check out some of the sights around Chelsea while we’re there. Earlier this week there was a delicious Chili-for-charity event for the Ruby Ranch Pig Sanctuary at Sadie’s Diner. I love how Sadie’s Diner puts these things on on a pretty regular basis. It seems like a great way to build community while also supporting great local causes related to animal welfare and rescue. So other than fantastic fundraiser and great organizations, I also really love playing with dough. Last night I made a challah. I love that moment when the dough just feels perfect, you’re kneading it, and it’s just exactly the way it should feel. Make a few loaves of bread, and you start to get to know that feeling, and when it’s good – it’s good. Today I discovered the initial signs of a new vegan restaurant near our neighbourhood. Well, it’s more of a new location for an existing restaurant, but still pretty exciting. Live Food Bar is coming to Liberty Village, and replacing what was once upon a mattress store. It’s right on King & Atlantic Street. As long a things go as planned, they’re aiming to open April 2. The original location is up at Dupont & Spadina and serves gluten-free vegan and raw food.