This is just a quick post in a series of posts about our 2014 Roadtrip around North America. At this point, we had driven from Toronto, through Michigan, taken an extended stop in Chicago, IL, and driven on through Wisconsin, Minnesota, North Dakota, stopping in Winnipeg, MB and Riding Mountain National Park. Our time in Saskatoon is winding down with only a couple more stops before heading on toward Edmonton.

When I lived in Saskatoon, I attended a few sessions of the Rosebud Burlesque school of dance and fun, and one of the nicest things I got from those classes was connecting with people I hadn’t ever met before and lasting friendships. Conveniently, one of those pals saw I was in Saskatoon and gave me the heads up about Honeybun Cafe having some vegan stuffed buns that day.

So of course we went, and picked up two of that day’s Featured Stuffed Bun – the Roasted Yam and Black Eyed Pea Chilli Stuffed Bun.

They had non-dairy milk (for an extra charge) for coffee. 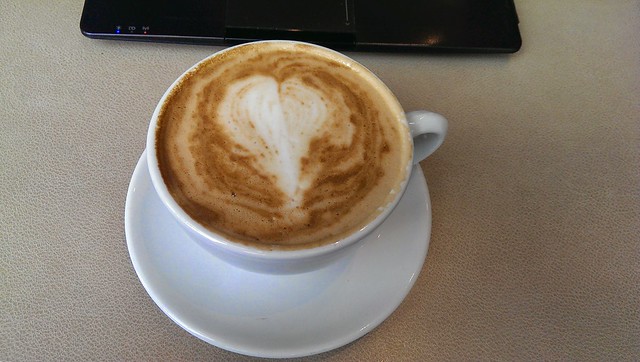 We whipped out our computers and hung out for a while, connected to their wifi. It was tough to find a plug in, at least ones that weren’t already occupied, but it was nice to hang out a bit and catch up on what was happening at home. 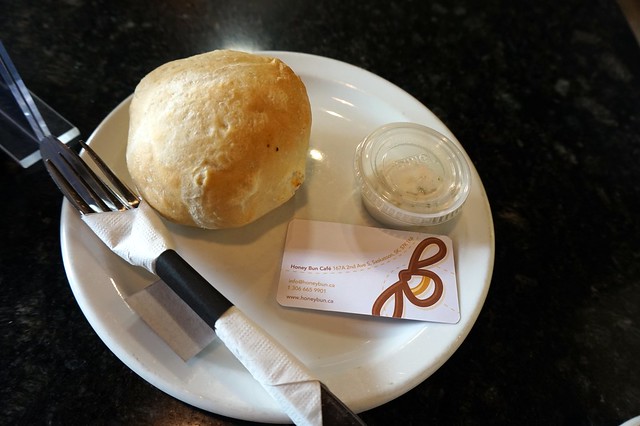 The buns were great, and stuffed with flavourful sweet potato chilli, it was delicious and we ate some of the last ones. It was stuffed with a roasted yam with black eyed pea chili. And came with a lime chipotle coconut dipping sauce. 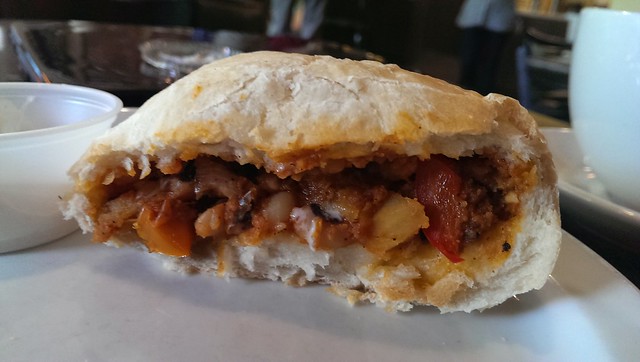 The Honey Bun Cafe has vegan stuffed bun options occasionally, but I didn’t notice anything on the standard menu, they make announcements on twitter on what they’re making that day so it’s best to check on there if you’re looking for something vegan in downtown Saskatoon.