I’m catching up on posting all of our Roadtrip adventures from the summer. This is shortly after Riding Mountain National Park near Winnipeg, Manitoba, we were there at around the last week of July 2014.

After a couple of lovely days at riding Mountain National Park we decided to drive into Saskatoon. JC had never been to Saskatoon, where as I lived there for four years during university. And I tried to like it, even when it was so cold the buses weren’t running, but the university was still open. I liked it, because it was so easy to dislike it. Too easy. Too easy to complain, and too easy to sit at home. And I’m stubborn. I found the things that made me happy. I created the things that made me happy, and to some extent I still feel connected to the city with my work helping out SCAT Street Cat Rescue. I feel protective over Saskatoon, and the Prairies.

As someone that’s now an outsider – Saskatoon seems to have only gotten better with time, and in my absence I’ve watched it grow from afar, with new vegan-friendly businesses & restaurants, an active and evolving arts community, and more. I mean, just recently I saw they had their own Nuit Blanche, it has a community that can sustain these things, sometimes it’s just a matter of someone starting it up.

We got into town around mid afternoon, just an hour or so before Keo’s Kitchen was due to close. After the Inglis Grain Elevators, in Manitoba, we put the restaurant in to google maps, and it navigated us through to the Broadway Avenue location. And then, after four years of telling JC how amazing Keo’s was – it wasn’t. Our first visit to Keo’s on the trip did not meet expectations, and it’s probably extra hard when I already put it on a pedestal.

I used to love the place when I lived there, it was my go-to spot. Maybe I take it personally when I’m wrong about food spots… but I wasn’t wrong. We went back another day during our visit and it was exactly what I remembered. Ultimately it just came down to the difference between one server and another, but I’d like to talk about all of our visits to Keo’s Kitchen in one post. (Spoilers: Keo’s redeemed, still good, still recommended.)

But after we left Keo’s the first time we hung out at the Broadway Roastery (the one on Broadway) with our computers, drinking some reasonably good soy lattes and deciding on where to stay. We hadn’t booked anything for that night, and it was getting close to evening. We found a great AirBnB spot to stay at (and seriously, I recommend this, it was great) the following evening, but that night was still up in the air. We had decided to get fancy after our camping trip, and eventually it was down to deciding between the Delta Bessborough (which looks like a pretty opulent castle) and the Parktown Hotel.

When I lived in Saskatoon, I lived a few places around the city (the far east side, the university campus, and then Downtown) my last apartment was near the Parktown Hotel and I’d walk by, occasionally peeking into their dining room, but generally thinking nothing of it. The Delta Bessborough on the other hand, has a real presence. You can see it along the riverside looking beautiful and like a fantasy, but something drew me to the Parktown, and I’m glad it did.

I think what really sealed the deal was that it faced the river. Every king room they had faced the river. So we got to see incredible views like this, right from our hotel room window. This is what I think about when I think of Saskatoon – the river valley. The walking trails, and in the distance you can see the university campus. 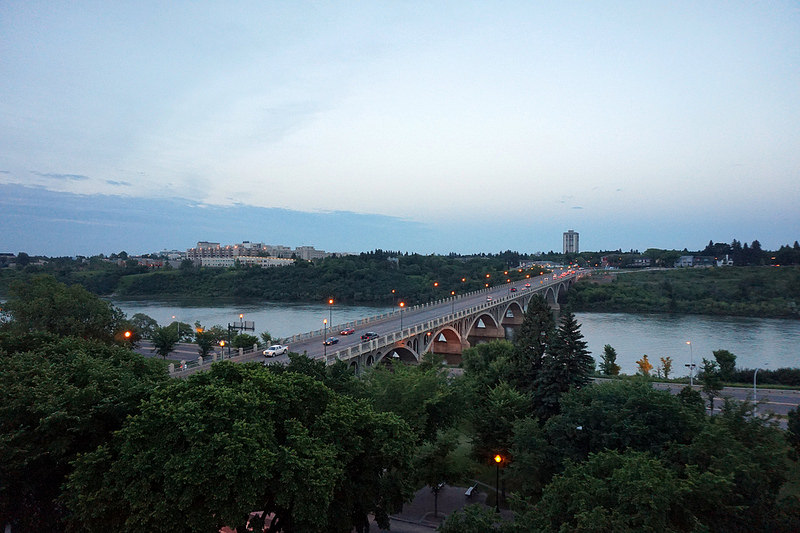 I don’t know about you, and it might just be my riverside childhood in Edmonton, but I love being close to River Valleys. There is something about seeing the river cutting through lush green forest, the bridges, the way the light and trees hit the water. This was perfect. For JC I suppose it was the comfortable king sized bed, and the fact that I finally found a hotel I didn’t hate.

The first night we were there we ordered a truly terrible “vegan” pizza from a place that had gotten decent reviews in the past, but as I found out after – had undergone new management for the worst (I’m looking at you Pizza Pirates.) They brought us the wrong pizza about several hours after we ordered it, were a jerks about it.

Luckily the rest of our food experiences in Saskatoon were much better than day one. Phew.

We didn’t spend the whole weekend at the Parktown – opting for an AirBnB with a pair of nice folks that lived just off Broadway Ave, which if you’re looking for a place to stay in Saskatoon, I totally recommend.

During our stay in Saskatoon we visited Nosh Eatery & Bar, U Fondue, Keo’s Kitchen, Garlic Guru, Honey Bun Cafe, and Griffin Takeaway for their vegan options. Most of which had some really great stuff and I’m looking forward to talking about them a bit more over the next week or so. There are also a couple of vegan friendly grocery stores – Dad’s Organic Market, and the Steep-Hill Food Coop.

Maybe I can inspire you to love Saskatoon as much as I once did.