I’ve needed to get out of town. Somewhere new(ish). Somewhere interesting. But still something close enough to drive to on the weekend. So we decided to visit Detroit last weekend.

When we left Toronto it was windy and rainy, as we continued on the highway it got worse and worse. Visibility was low, you could see large commercial trucks weave into adjoining lanes with nearly every gust of strong winds. It was no joke.

When we pulled into the Ingersoll En Route, it seemed like our trip was over. It was windy, raining heavily, and a lot of cars didn’t seem to be driving with consideration for the weather.  We grabbed a couple of teas and dry toasted everything bagels from Tim Hortons (yes – they’re vegan [most of the time]) and decided to spend the night somewhere close by, maybe Ingersoll, maybe London. Probably not Detroit. At least not that night.

I booked us a night at a hotel in London and we started driving there. The road seemed a little calmer, and a little less hectic. Traffic wasn’t as tight. When we got to the hotel, a computer glitch meant we hadn’t been booked in that night, but a week later. And they were totally full. Whoops. We took it as a sign to keep going.

The only negative part about the full hotel (other than the 3 hours more of driving) is that it guaranteed we would definitely be missing London’s VegFest on Saturday.

When we got to the Windsor-Detroit border, we got the gears from the agent – normally, we go to Buffalo & Niagara. Apparently we cross there a lot and this made him suspicious – he also seemed to take the attitude that it didn’t make sense for people go visit Detroit from Toronto. I really like Detroit. And our hotel had an in-room whirlpool. Apparently, those aren’t selling points.

He searched through our car and asked to see our hotel itinerary – which JC had queued on his phone screen just in case, and eventually let us through with a “stay safe in Detroit” but in a way that made it sound more like threat. We did stay safe in Detroit. We had a great time once we got past the border. Driving in, things were looking up.

When we got to our hotel in SouthGate, MI/South Detroit, we skipped dinner because all pickup and delivery options were done for the night and I think we were both grateful for the clif bars we had eaten 6-7 hours prior (and even somewhat grateful for the stress flavoured toasted everything bagels we’d had 3-4 hours before.)

The next morning we had planned on checking out Seva for breakfast and visiting the Whole Foods in downtown Detroit. No big plans, just food and relaxing. 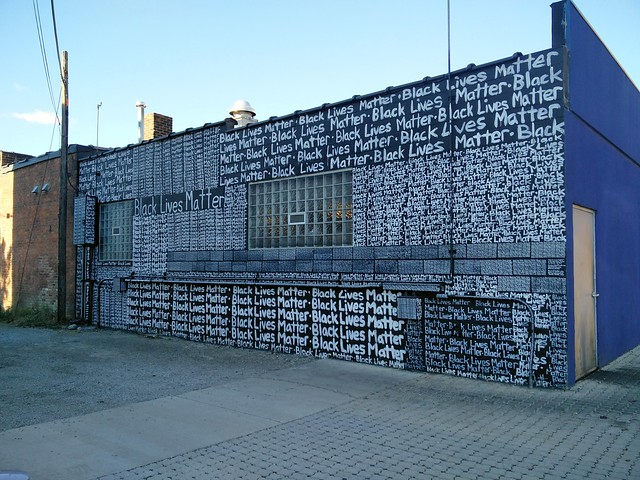 Seva was great (for us) because Saturday Brunch doesn’t seem to be a thing in Detroit. We were one of only a few people there. It was weird, but great. Service was fast and friendly. I started with a hot chocolate, since that’s what I always do everywhere that has it vegan on the menu. We had been to Seva before, and mostly liked it back in 2012, so it was nice to revisit and see what was different (and what had remained the same.) 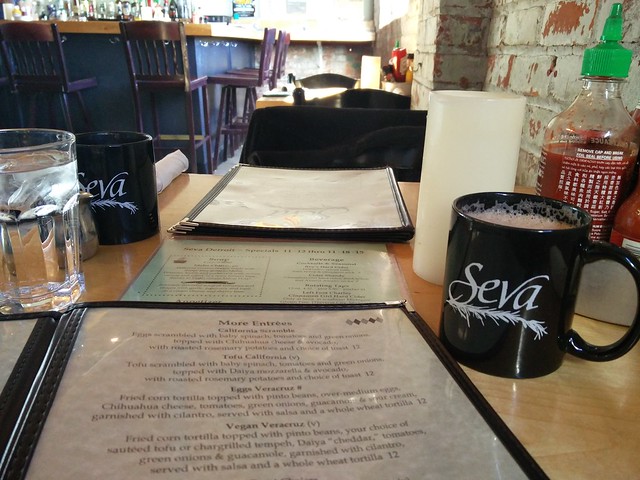 We also started with an Idaho Chili, which I thought was a cool enough premise because they used a bunch of Idaho vegetables for it. (Basically, I think it was a great excuse to put potatoes in a chili, but that works for me) 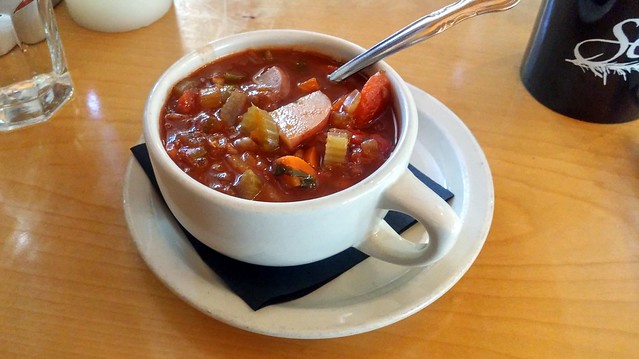 I ordered the Vegan Veracruz – which as a fried corn tortilla topped off with pinto beans, tofu scramble, daiya cheddar, tomatoes, green onions, guacamole, and cilantro. I took a blurry picture of it, but I also ordered a “trio” of sides – mostly as an excuse to eat a bowl of broccoli which I did successfully take a photo of. (pregnancy has me craving random things, and while I’m always a fan of broccoli, it’s not usually to this level of obsession.) 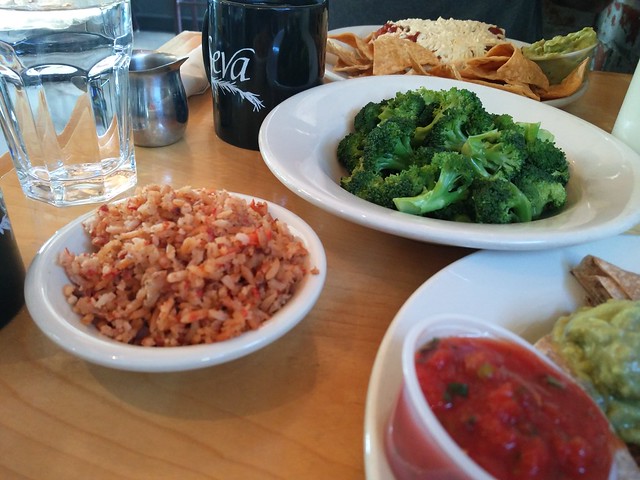 JC ordered the veganized enchiladas, and I think he liked them, but I was too busy eating small trees to notice. 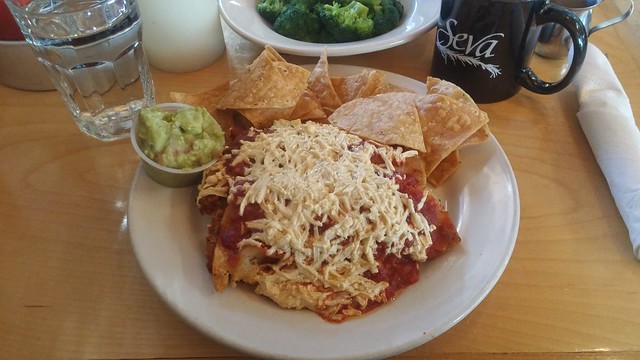 Afterwards we went to Whole Foods and stocked up on a few things – still makes me so sad that some of Canada’s labelling laws and ingredient laws prevent so much great vegan food from ever making it to Canada (even when it’s produced in Canada.)

We stocked up on a “Whole Foods Exclusive” the new yogurt from Kite Hill, and it’s pretty darn good. I’m still hopeful to see Daiya’s thick yogurt available here (because it might be one of my favourites) and I’ve been bugging them occasionally about it so we can carry them at the V Word Market sometime in the near future.

And then we went back to our hotel and played video games and lounged around in the in room whirlpool for the rest of the day.  Just a great relaxing Saturday all around. 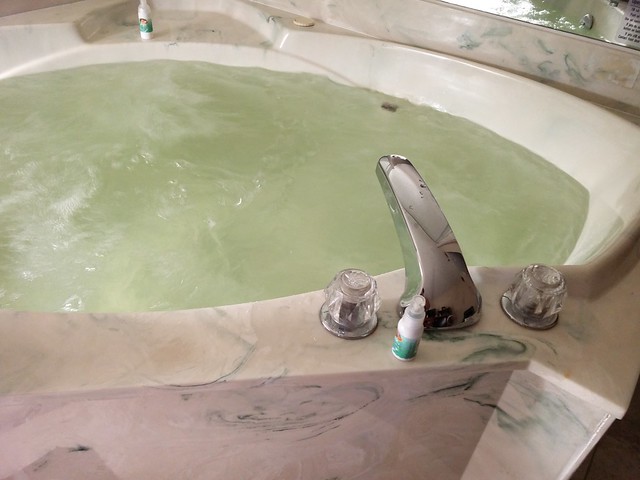 Since we weren’t really exploring, we went out to Ferndale for dinner to a place we’d visited before Michigo Pizza. This place is great, because you can get a vegan Chicago-style deep dish pizza, any day of the week. 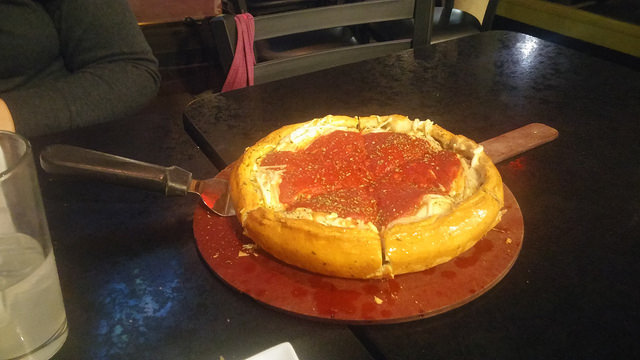 You know what we had a hard time finding when we were in Chicago? Vegan deep dish, now, my helpful friends have since informed me that if you’re in Chicago looking for deep dish – Kitchen 17’s got it. (But it might only be available on Wednesdays) 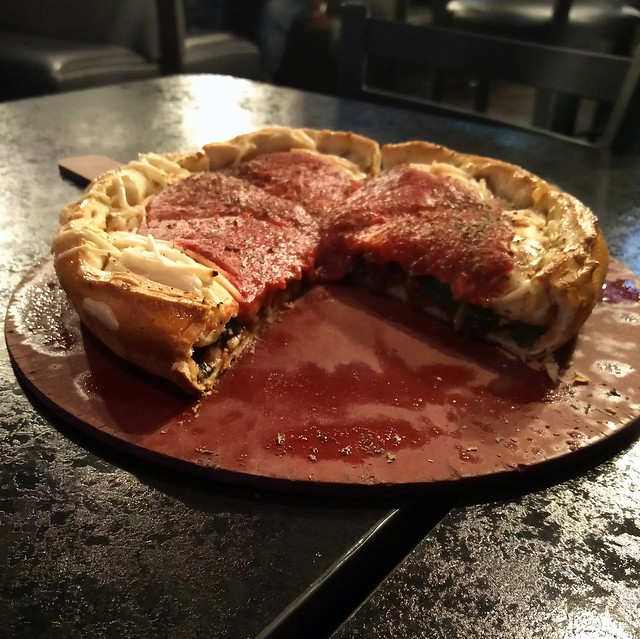 The next morning we paid a visit to another familiar spot – Brooklyn Street Local. Their story is quite interesting, but I’ve talked about it in a previous review so you can check that out here if you’d like to. (the short story is that they moved from Toronto to Detroit and made a local food focused eatery happen. Also, Toronto is expensive. etc.) 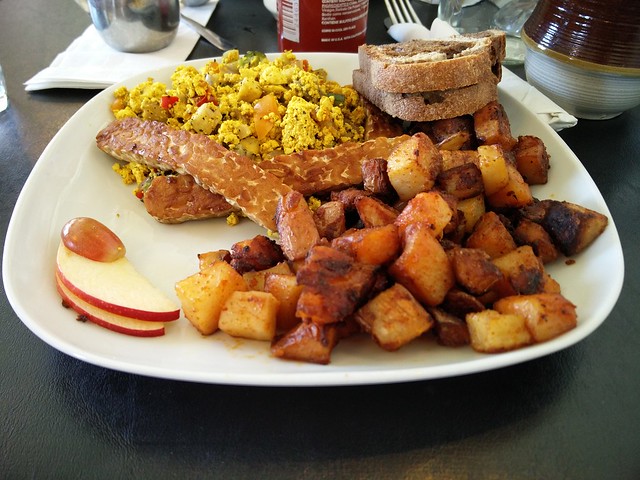 I had the aptly named Vegan Breakfast again, this time I got it with extra roasted veggies. JC helpfully stole the garbage melon (aka cantaloupe) from my plate before I could even take a picture. Thanks pal.  Overall, we had a great time. We tried to stop in to Veg Out on the way back home, but they close early on Sundays – which is something I’ve encountered before, and probably will encounter again in the future. We went to the Zen Gardens I didn’t reven realize was there, though it seemed quite a bit less vegan-friendly than some of the other locations around Ontario. And suddenly, we were back at home like normal.