I mentioned this on Facebook, but earlier last week a friend us a picture from the new Tim Hortons in Liberty Village. A Tim Hortons location with soy milk. 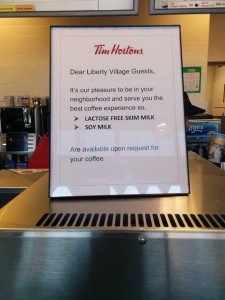 I wasn’t able to go check it out for myself until yesterday where JC and I have a standing Wednesday lunch date. The same friend that passed on the news initially, said that there was a new sign. A less exciting sign, but we opted to check it out anyway after lunch. We walked over to the Liberty Village Tim Hortons and saw the sign our friend was talking about. See what I mean? Neither of those interest me. I wondered if the soy was gone – so I asked, and the manager just happened to be there, and we asked about soy and they had a bunch (in case you’re curious, they’re using Silk Original flavour). He mentioned that their location, as well as a couple of others, were doing the soy thing independently. Corporate was okay with it, but not making it a regular thing (yet.) So of course, I got an iced capp.

It’s sort of surprising to me that I would even write about Tim Hortons, the grand corporate entity that still dominates the Canadian coffee market. In all honestly, I am more likely to walk over to Balzac’s or Uma when I feel like getting a cup of tea or coffee, since I like the feeling of going into a local indie spot (please see: Indie Coffee Passport), but the idea that Tim Hortons would actually have a non-dairy milk option for ANY reason is still incre

Earlier this week I sent Tim Hortons an email expressing my excitement about the presence of soy milk, and asking about the future or if they’re going to roll it out nationally, I’ll update this if they ever reply.

Other things I love For December’s gift exchange I gave JC a self serving gift of a tofu making kit and a tofu zine I wrote myself. He had talked about wanting to make tofu at length, but also wanting to use local soybeans.

I happened to come in to the West End Food Coop just as a large quantity of Ontario soybeans had appeared. I bought most of them, and packaged them up, and put together a bunch of other things he would need to make tofu. Like not-cheesecloth, a mesh strainer, a collection of salts, a spatula, and a few other things. The most effort went into making the zine, which I’m pretty thrilled with too (it also helped me learn how to duplex print on my printer….)

It’s been awesome drinking fresh soy milk and using the okara in recipes. JC’s sisters gave me this Robot-Hugs “Nest” print for my birthday. I love the comic because I love the sentiment behind it, and also that you can take whatever meaning you want from it if you want to. I feel like friends and partners should be a willing to be a refuge from all the potentially terrible or difficult things in the world and/or inside your head.

Plus I also totally love the Robot-Hugs web-comic because it often playfully deals with serious issues, and I think it’s cool that the creator behind it lives in Toronto. (P.S. some Robot-Hugs comics are Not Safe For Work!) These cats, and most cats.

I hope you are having a nice week!

One thought on “Things I Love Thursday – Soy milk at Tim Hortons, probably other stuff.”