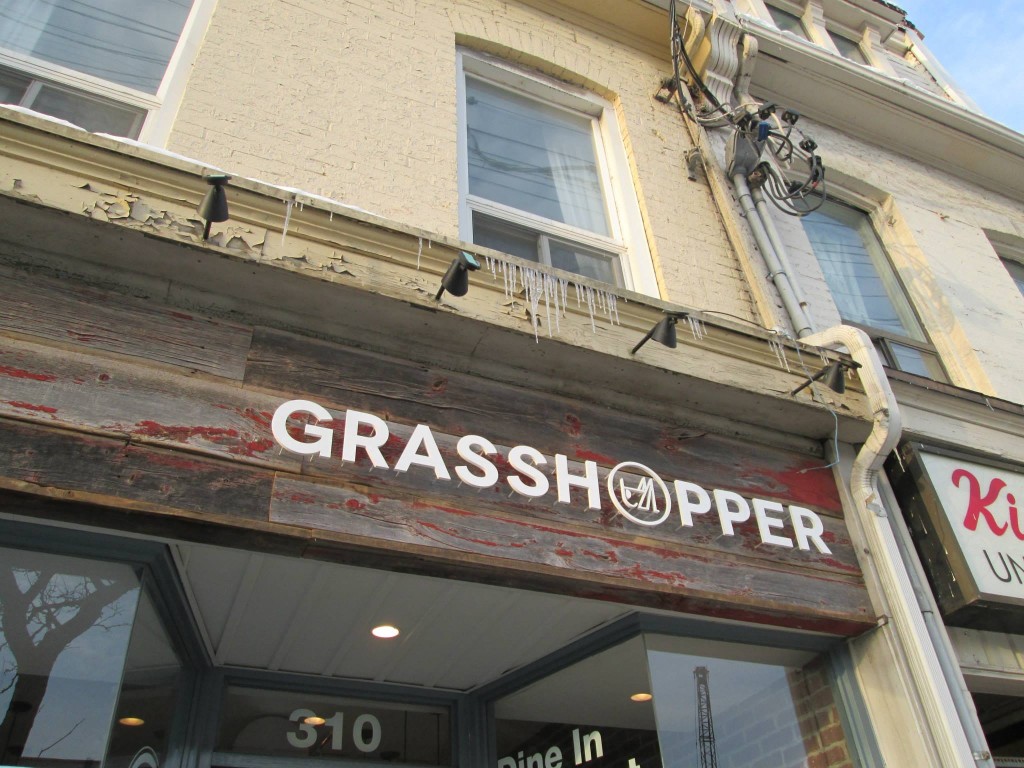 We checked out Grasshopper Restaurant’s trial menu/opening this weekend while visiting some of the Indie Coffee Passport stops in Kensington Market. It’s a new meatless restaurant that seems to have couple of dishes that contain dairy, but is otherwise vegan. They might also use non-vegan mayo in some dishes, but the menu has a guide where V means vegan (and SF means soy free, and GF means gluten free.) You can check out the trial menu online

So happy to be a part of this neighbourhood #kensington #toronto #vegetarian #vegan #fusion pic.twitter.com/ncLZa6M5hY

They opened earlier this month and are located very close to Kensington Market. Grasshopper has taken over the spot that used to be the Mexi-CAN market on College and has been completely renovated and looks bright, and clean with large windows letting in a lot of natural light, as well as really interesting light fixtures. It’s small, but it’s comfortable and tables seemed well arranged, where they maximize the use of their space, while still balancing comfort of patrons.

Here is what we ordered: The Sauteed “beef” & cremini mushroom satay with a chimichurri sauce.

The chimichurri sauce was great, and the smoky seitan not-beef had a a lot of flavour and a very meaty texture. One thing that I wish we had ordered were the Chick-un Fingers. I heard later that the not-chicken itself is vegan, but the peanut dipping sauce is not. I think the Tempeh Sloppy Joe sounds like my next dish from Grasshopper. This is the “Pulled Pork” Bahn Mi. It was pretty light on the BBQ sauce (or any sauce), but the “pulled pork” was flavourful and tasty. It came out on a lightly toasted roll, with pickled daikon and carrots. You have the choice of a side salad or fries. (these fries, while looking like boring old fries, actually had an interesting smoky flavour to them.)

Like most of the menu, it’s mostly meaty style vegetarian fare (like the banh-mi-style sandwich above), but they also have salads, soba, and rice bowls. There is also a huge liquor license sign in the window, so alcoholic drinks are coming to Grasshopper too.

I’m glad we got to check it out. Some people next to us had already been there twice.