Continuing with my VeganMoFo theme this year on Vegan Weddings, Let’s talk Dresses!

What’s not vegan about a wedding dress? You’re not eating it…?

This is a question I was actually asked a couple of times. Well that’s one of the instances where being vegan and following a plant-based diet differ. Sometimes people don’t consider silk or wool when they’re thinking about their dress. And some people (if they’re me) think about it too much.

So, what’s wrong with silk? I was going to give you my thoughts on this, but I think The Ethical Man sums it up perfectly for me too:

In silk operations, the insects are viewed and treated as inanimate commodities, nothing more. I am hard-pressed to think of anything more arrogant than wholly appropriating the lives of other creatures — literally claiming to own others’ bodies. In that regard, the silk industry is no different from the animal industries we often more willingly deem immorally exploitative. (read more about what’s wrong with silk here)

To me, it just seems logical that I would avoid that particular industry as well as some of the others.

But what about “Peace Silk” or “Ahimsa Silk” well… again, I’ll leave that to someone that’s already covered it extensively. Worm Spit is run by a non-vegan producer of regular silk products and they have an interesting write up on the realities of peace silk (as in, is it really that peaceful?):

I think that Ahimsa Silk doesn’t really equal non-violence to insects, once you understand the process and do the math. I think that a lot of vegans and vegetarians want to find a way to rationalize using silk  … The thing that many people don’t do, is look carefully at how the whole system works. (Read more here)

In actuality, if you want a totally vegan dress…. it’s out there. There are a few fabrics to look out for, and something we had to look out for when selecting a chuppah as well, but most of the time, the dresses I was looking at were made of polyester or cotton. Occasionally there was some tulle, chiffon, or organza which are fabrics you should double check on as they can contain silk… and sometimes they don’t (rayon often takes the place of silk in these blends.)

Out in the real world

One of the first places I went to try on dresses was at Ferre Esposa in Toronto. I emailed them to make an appointment and asked about vegan/silk-free dresses, and they replied quickly and said it wouldn’t be a problem.

I whipped out my pinterest wedding account board, and showed them a few of the styles I loved (at the time) and they found a series of similar vegan styles for me. I tried them on, took a few pictures, and went home.

While I didn’t end up getting a dress from Ferre Esposa, they were great and helpful. I recommend going to at least one bridal shop if you’re thinking of buying a traditional(ish) bridal gown/dress in person or online. It helps to bring your ideas and thoughts to life in a way you might not have expected.

Instead of buying a ready made dress, I opted to get my dress made by someone else, and someone local, who for now will have to remain a complete secret*. The funny and unexpected part about this was that it actually ended up being less expensive than most of the dresses I had been looking at online and in the store.

*JC and I are mostly keeping our wedding day clothing a surprise. We hope to both surprise and delight one another at the wedding in front of 100 family members and friends. Eeek.

Some (vegan) dresses I love:

(Edited to add: None of these are going to be my dress, I just think they show the diversity of vegan-friendly dresses that are out there,and they are just really lovely dresses) 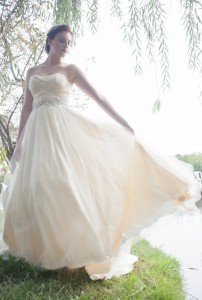 This is the Prairie Rose Eco Gown from Janay A. Handmade Organic Bridal. They are a vegan friendly company, but watch out for hemp-silk. She also does custom orders. 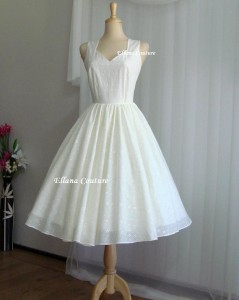 This is the “Maggie” from Ellena Couture on Etsy. It is made from buttercream cotton eyelet fabric and is also available in white.  It’s made of 100% Cotton. 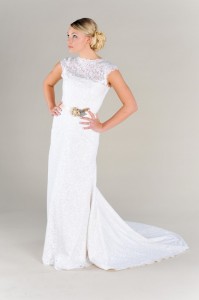 This one is the Winter Lace Dress from Pure Magnolia from North Vancouver, BC.  It’s made with 100% cotton, including lining. You can also find them on Etsy.

A large bridal company that seemed to have a lot of options (in mostly non-natural fibers) if that’s something that interests you) was Allure Bridal.  It’s worth inquiring at a local shop or you could even get the Kleinfeld’s Bridal experience (I may have watched TLC’s Say Yes to the Dress once or twice…) written about on Rose Pedals Vegan Weddings site.

Another option, and an option I pursued, is to find out if you have an awesome seamstress/tailor in your community that would be able to make a dress for you. There are also online options for custom made dresses that can take your material preferences into account when creating your gown.

When you’re looking online, sometimes it is worth looking for “Cotton Dresses” instead of “vegan dresses” as there is occasionally a vegan markup (don’t pretend it doesn’t happen!)

Sometimes it’s worth thinking outside the box. Remember that you don’t need to look for an “official” wedding dress, there are so many lovely dresses out there, in so many different colours, it’s your day to make them your own.