Hope people have a lovely weekend. I know folks don’t always post mofo stuff on weekends, but I’ve got a lot of ground to cover (pun intended.) so I’m going to keep powering on. Also, the awesome Vegetarian Food Festival is on in Toronto this weekend, so I figure I’ll want to talk all about that on Monday. Yesterday was absolutely awesome.

BUT don’t leave VegFest without talking to the Field Roast folks. The Canadian Government, specifically the CFIA, is saying that they don’t meet some archaic regulation about meat substitutes (C.R.C., c. 870 B.14.087) AND NOT ALLOWING THEM TO SELL IN CANADA. As it stands right now, as of last week, Field Roast stock Canada wide is limited to what is already in the Distribution Centres, but beyond that no more can be imported until this is changed.

Add your name to the email list at vegfest for more information. Or send them a note on their contact page. I’ll post more about it when I find out anything. I fully plan to start or join in on a fuss about this. Now back to your regularly scheduled programming.

We last left off driving through Minnesota and debating whether or not we would stay in Grand Forks, North Dakota. It was rainy and blustery, and any normal pair of folks would probably think… let’s pack it in for the night. Not us. We stopped for gas, checked to see if there was anywhere for us to eat – Amazing Grains food coop was the most promising… BUT it was already past closing. So we drove on in the rain on the I-29 towards the Pembina / Emerson boarder crossing.

Of the uneventful boarder crossings we’ve had, this was mighty uneventful, which was nice, because it was late in the evening. It’s actually quite normal for Canadians to cut through the USA to get to Winnipeg and beyond.

Believe it or not, Ontario is HUGE, especially when you go across. When I bused across the country in 2010, I remember being shocked at how long it took to get to Toronto once we entered Ontario. I would have thought just a few hours – nope, nearly a full day.

One thing I’m still kicking myself over is that we didn’t stop at the magnificent Manitoba sign on the MB-75 Highway but Jimmy Emerson on Flickr had a picture (the one below), so just imagine this at night. The whole sign is glowing, and we couldn’t even tell that there was a Travel Manitoba centre behind it. 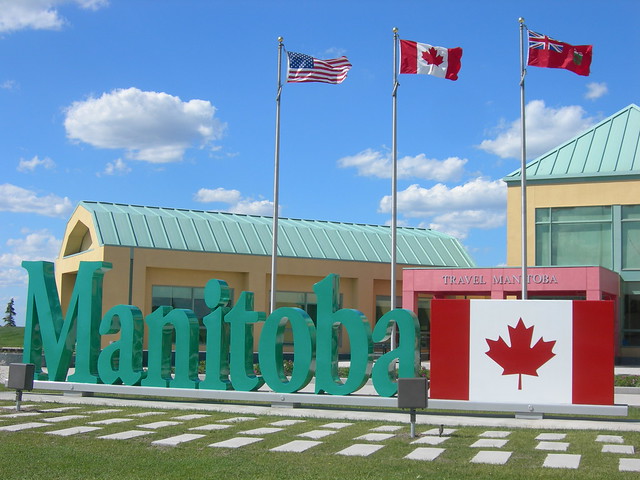 We hadn’t planned out a place to stay, partially not planning anything because who knew where we’d end up that night and partially thinking that there would be motels along the way entering Winnipeg. Not really. And for some reason, every hotel we stopped at was full or expensive. There was no in between.

Eventually, frustrated, I saw the Marlborough Hotel listed somewhere online and gave them a call to find out if they had rooms and how much they were. As an added bonus they had free wifi. And as a sort of ambivalent bonus they also had breakfast (not that that was particularly exciting as vegan options were limited).

After stopping in Winnipeg on the way to Montreal and Toronto by bus, I’ve wanted to visit the city properly for years. It’s one of those incredible prairie places where nearly anything can happen, and people are working together to create community in whatever niche they are in. I’ve watched it grow and become something really awesome especially over the last few years, so it was nice to finally be there. The only question was – where would we go first? 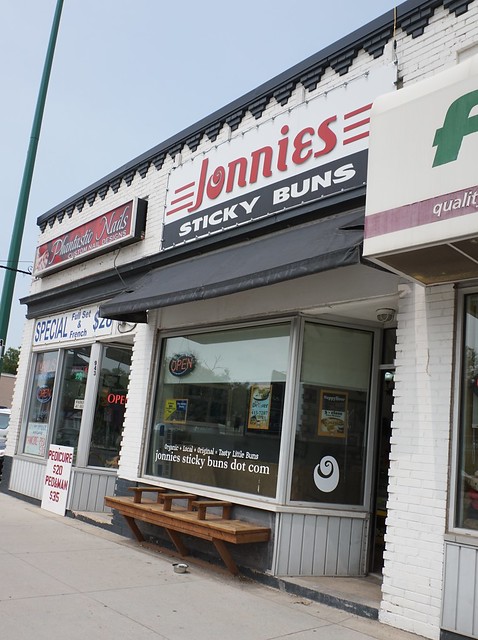 Turns out, that was an easy choice – we drove over to Jonnies Sticky Buns for a cinnamon bun breakfast, before meeting up with friends that had only days before moved to a beautiful house in Winnipeg from Toronto. 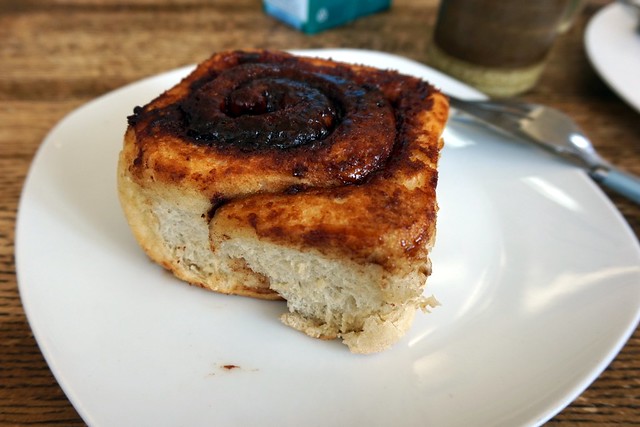 This is the Leroy from Jonnies Sticky Buns – it’s a white flour traditional cinnamon bun. And it was unbelievably inexpensive. Painfully inexpensive, because I miss this fabulously large cinnamon bun, and I think we should have had more of them. Because it was delicious. This place is a gem. 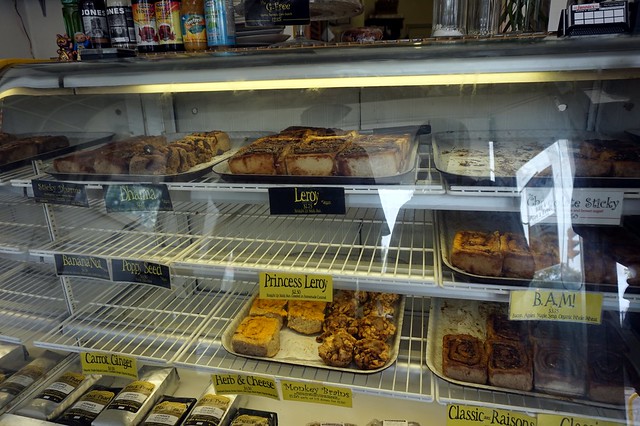 Not all the Cinnamon Buns are vegan, but everything is labelled very clearly. They have special buns that aren’t always sweet, but we only tried the Leroy both times we went in.

They serve Black Pearl Coffee, a local Winnipeg based purveyor and roaster of fair-trade and organic coffees. We just had the drip coffee but it was really quite good. (they also have their own cafe at 460 Dufferin Ave.)

Jonnies also has a bunch of sodas to choose from and something from another Winnipeg based company, Yomm Beverages – a sweet hibiscus drink that has a seriously unique but pleasant flavour. I bought a few for the road when we left and have since had to seek them out in the Toronto area (and p.s. they appear to sell them at Yummy Market in Maple, ON, I’ll have to check it out.)

We stayed in Winnipeg for three days, and there is a remarkable amount of wonderful vegan stuff there, I’m looking forward to sharing the rest of what we found over the next few days.