This was my fourth Vegetarian Food Festival, and my fourth year in Toronto, it’s one of my favourite yearly events, and not just because it also coincides with one of my second favourite events – the Toronto International Film festival. This was also the first time I didn’t have a camera with me, so I just enjoyed the festivities and food, and didn’t take many photos. Maybe there is something to just experiencing things without photos to prove it, but I do miss my camera (it’s being repaired right now after I fell on our last day of travelling.) 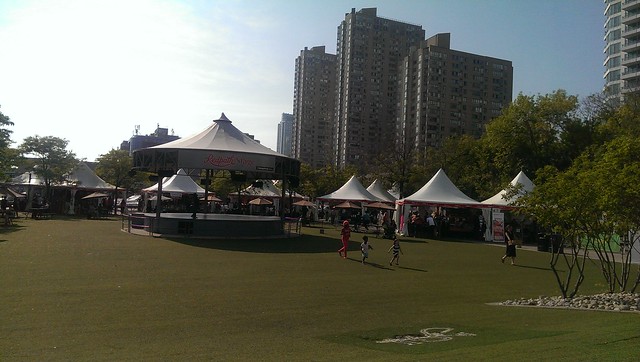 I went on Friday evening and being there reminded me very much of the feeling I got when I arrived in Toronto way back in the summer of 2010. As I sat in the sun, eating an APieCalypse Now magic square, and drinking a cup of my new favourite local kombucha (Pekoe Kombucha) I was just enveloped in a wonderful feeling of these are my people. I am home. We may have our differences (a lot of them), but there is still a feeling of connection at these events that I really love. It was so nice to catch up with friends, and discover new businesses that I hadn’t heard of before. Also the weather was gorgeous. 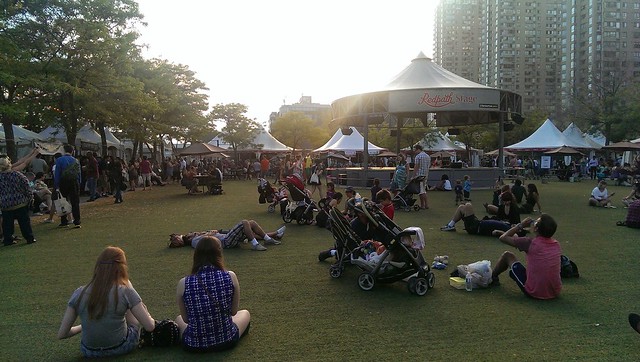 So here is the Magic Square, and it was amazing as usual. 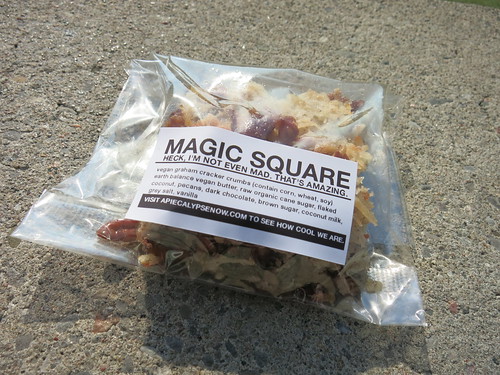 Eventually, we also picked up a pumpkin pie, a piece of peach pie, one of those famous s’mores pies, a Free Shrugs t-shirt, and some very clever buttons (Some of which have been claimed by friends from out of town, others I plan to wear with glee.) 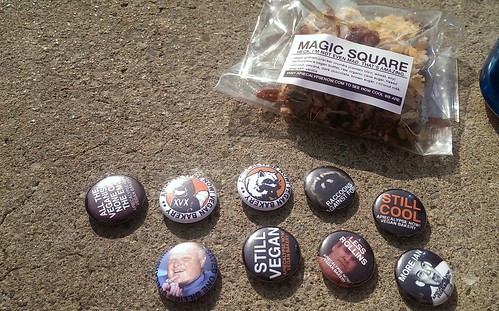 There were a couple of things that stood out for me at the show, other than the unpleasantness about field roast I mentioned in Saturday’s VeganMoFo post, everything else was exciting news about new local products. 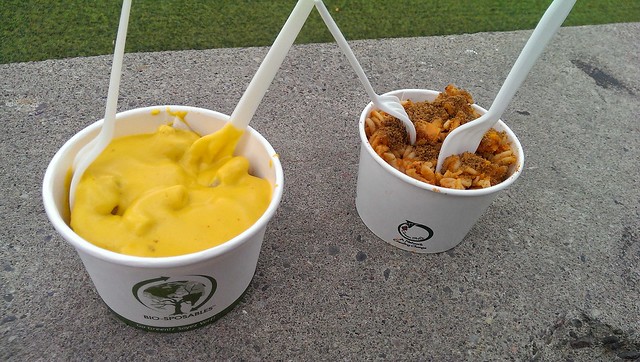 Kailey from Soul to Bowl was there with her usual delicious vegan alfredo sauce, but she has also been cooking up another one – a cashew based mac and cheese sauce which she was testing on a happy VegFest audience. JC and I tried a bowl of the Soul to Bowl mac & cheese (on the left) and a bowl of the Green Zebra mac & cheese (on the right), and my favourite by far was the very saucy and flavourful (and new) Soul to Bowl version. Somehow the gluten-free pasta didn’t taste like garbage (and was actually tasty too) so extra kudos for that!

Mac & Cheese was a big hit at this Veg Food Festival – including the option to have it in a burrito over at Hot Beans (and donuts from Through Being Cool) – but according to the secret menu over at Hot Beans, you can always get a Mac & Cheese burrito, so if you missed this weekend, don’t worry, you can catch them in Kensington Market any day.

There is a new Kombucha Bar coming our way, on Bay & Dundas (123 Dundas W in Toronto). Their logo caught my eye, and it all started with a sample. Then a cup. Then eventually a growler. That we refilled. Twice. 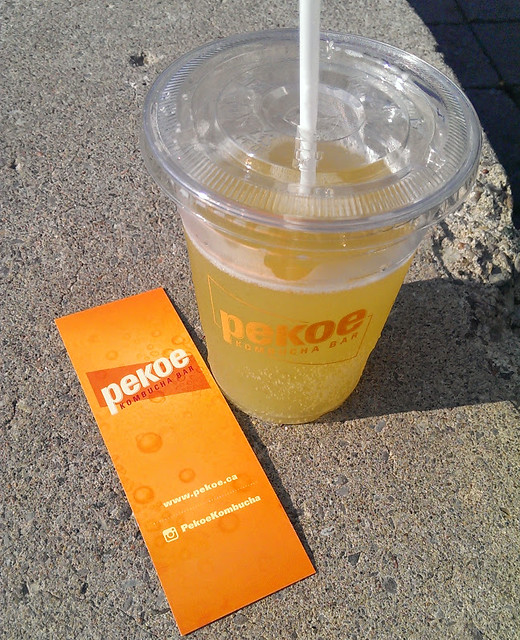 Needless to say, I’m a fan. They hyped the health benefits of kombucha, but for me, it was all about the flavour. If you’ve tried kombucha before and found it had an unpleasant aftertaste – well, it’s just not there in Pekoe’s Kombucha. It had all of the weird deliciousness of kombucha, without any of the gross. Looking forward to their grand opening.

They’re totally new, and made in Toronto. There were samples, and we tried them, and they were so good we bought one of each at the show. That said, I’m not sure if I’d call it “cream cheese” but it made for a very excellent dip. I’ll have to make bagels sometime soon and see how they taste on bread. 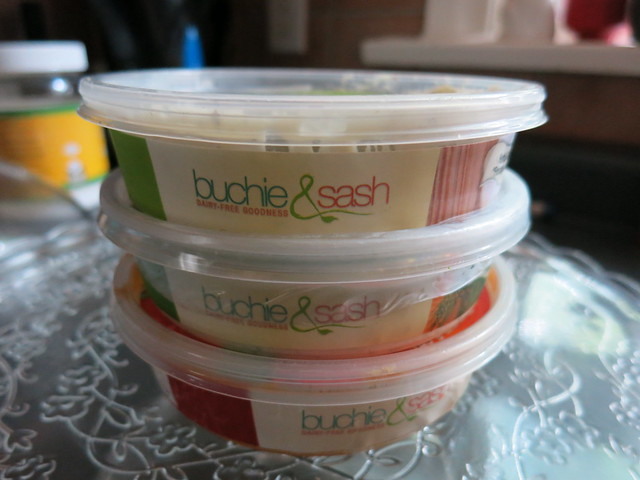 The best part about the Spicy Chili Pepper is that it was actually spicy,  it took a few bites to get used to the sharp chili flavour, but I was so excited to find something with a bit of a kick to it.

Overall it was great to see them at the show, and even better to buy three to take home. We have already finished the Spicy Chili pepper one… luckily you can also get them at Fiesta Farms & Bruno’s Market in Toronto, they are available at a few more retailers outside of Toronto and those are listed on their website.

The funny thing about Le Grande Sauces, a Montreal company, is that we originally bought a package of Pesto from Wegmans on the way back home. Most varieties should already be available in Toronto stores very soon.

It was really nice to meet one of the creators at VegFest though, and she was so excited to have us sample the vegan bolonase and rosée sauces, and I was just as excited to try them. As an added bonus, they’re not in glass jars (because let me tell you – I have too many glass jars) but are still recyclable. 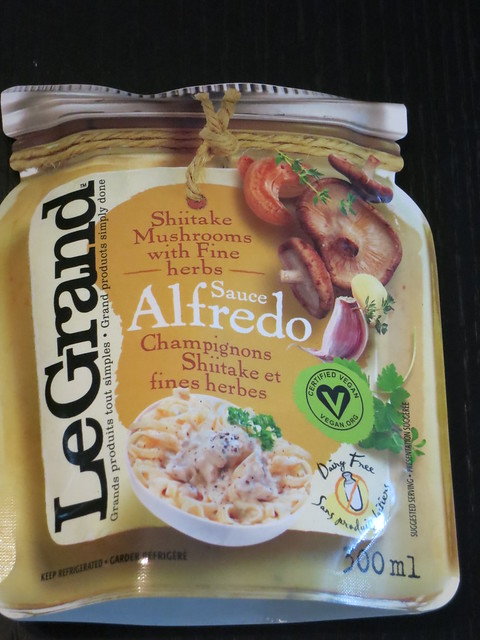 Not all of their products are vegan, but those that are have the certified vegan stamp right on the front. My favourite sauce was the Rustic Rosée – it was full of rich flavour with roasted red peppers, onions, and sun dried tomatoes. For reasons unknown – we didn’t by a package, so I’ll have to pay attention to it in stores.

Another lovely veg fest over, and one of my favourite weekends every year. Next VegFests in Ontario – VegFest Guelph, Bronte Veg Food Fair, and VegFest London

If you went… what was your favourite thing at VegFest this year?