This weekend was one of those action packed weekends that only seems possible in a big city. There was Jane’s Walk, the Toronto Marathon, the Toronto Comic Arts Festival, and so many other things. We did none of those, but still managed to fill up our weekend with THINGS. So many glorious things.

I spent the morning finding things to send to my RedditGifts partner for Awesomesocks this month. Which resulted in going to every store in Queen West that looked like it’d have fun socks. You’d never think fun non grown up socks would be hard to find… but they are. I ended up at Clic Klak (435 Queen Street W) and found exactly what I was looking for. Hopefully my exchange partner likes them too!

One place on Queen Street that I can’t pass without either going in, or staring longingly inside the window is The Paper Place. It’s kind of funny considering how much of my life is strictly digital, but there is something so friendly and fun about a handwritten letter or note that my usual quick emails just don’t satisfy. I wanted to send out thank you cards to everyone that had donated to my WWF CN Tower Climb (since I promised to send everyone a picture) and I found absolutely lovely ones from the Paper Source via waste not paper in Chicago. 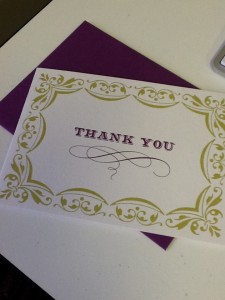 Greens Restaurant (638 Dundast St W, Toronto, ON) was our lunch/dinner stop that evening. We joined a couple and their kiddo for a huge but rapidly disappearing meal. Greens was BUSY. But the food was great as usual. We ordered a bunch of food, won ton soup, hot and sour soup, noodles, the soy fritters (pictured below), and sweet and sour “chicken”. I will forever recommend the King Mushrooms in Pepper Salt to anyone that will listen. It’s delicious, somewhat spicy… and really really salty. Hydrate well afterwards. We checked out the HotDocs screening of We are Legion: The Story of Hacktivists. It was a good overview of the last few years, from the work done against Scientology to the more political activities to the nonsense that the original 4chan /b/ anonymous spawned from. This was exactly the movie I expected plus a little more. I kind of don’t want to ruin the surprise, but the Director totally trolled the entire audience in a sequence of images that I’d like to call “What has been seen cannot be unseen.” It wasn’t pornographic, or gory, just… disquieting. (If you’ve ever been on /b/ before, you’ve likely already seen most of them and more, but it’s quite a different experience entirely to see it on the big screen at the TIFF Lightbox.)

Then on a whim we drove to Niagara Falls at 9pm. The entire drive down, the Super Moon lit our way. Who knew 14% closer could be so significant! We drove in shortly after The Guru had closed, debated whether to drive to Brooklyn’s (206 Richmond Street, Unit 9,) the vegan friendly bar in Thorold, ON that I first heard about from the Vegan Police and Niagara Vegan (both great resources), but ultimately we fell asleep before any of those plans could come to fruition. One thing I like about travelling is that sometimes I forget that I’m not at home. So when I woke up that morning and glanced out the window, the picture above is what I saw. I was blissfully surprised at the view. I’m still a sucker for Niagara Falls, and even though I was just there a few months ago, it was such a nice recharging getaway. Trying to find vegan brunch on a Sunday morning near Niagara, that started before 11am was not easy (and as it turns out, not possible). We had the zipcar until 11am, so we were on limited time. Rise Above, The Naked Sprout, Kindfood and others were either closed until 11, or not open at all on Sunday. Luckily once we got home we got an invite to Sadie’s Diner, and in honor of post-Cinco de Mayo, I got the vegan rancheros. There are rumors (and photographic evidence) of new vegan shoes at Jonathan + Olivia (49 Ossington Ave) from a facebook post by The Streets I Know. I still haven’t gone. The store has always seemed to and cute for the likes of me, but I’m going to try and check it out after work this evening.