Vegan Wedding Related time-sensitive note: For brides on a budget or people that like cute white dresses there is a sale going on on Unique Vintage that you might be into. (I’m unaffiliated with them, but I was amazed at  how cheap some of their dresses were while being pretty AND 100% cotton.)

Back to our scheduled programming. 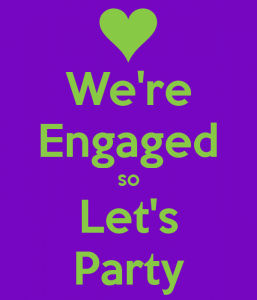 Shortly after JC and I were engaged JC’s mom (hence forth known as Val) threw us an engagement party. I’ve since learned that traditionally it’s the brides parents that throw the party – but Val offered to do it almost as soon as we announced our plans, my family lives in Edmonton, Alberta (which is pretty much on the other side of the country) and frankly… we’re not very traditional people (except when we are.)

My little guide here is a blend of personal experience and things I’ve picked up along the way both before and after.

Hopefully it’s helpful to you even if you don’t live in Toronto, but really, feel free to reach out if you have any questions, I’d be happy to help.

Things to think about:

A vegan engagement party is not that much different than any other party, with a few small exceptions (that you might want to ignore anyway).

0. Do you want an engagement party.

Do you want a party? If no, cool! There is nothing saying you have to have an engagement party.

If yes, your adventure continues.

1. Who are you inviting?

There is some etiquette around only inviting people to the engagement party that you intend to invite to the wedding, but it’s becoming less important with the way people are scattered around the world these days – Of course, I’m no Ms. Manners, so you follow your heart.

If you are throwing an engagement party for other  people make sure you are only inviting people they actually want to celebrate with. This should go without saying, but sometimes it doesn’t

You might want to send paper invitations, you might not. If you’re already on the ball and have wedding invitations printed or created, it’s worth asking your printer/designer if there is a discount for doing both wedding and engagement invitations at the same time. 9

We sent out Facebook invites, this worked out fine for us and our social circle. You know your friends and peers best. Other online invitation options include EVite, Pingg, and Shindyg.

We wanted to have it at our place, but weren’t really involved in the planning beyond that. Depending on the time of year you might want to turn it into a picnic in the park, a fun BBQ, a meet up at a meaningful restaurant or pub, or a super fancy shindig at a non-house venue. It really depends on your budget, or the budget of the people throwing the party for you.

Pick somewhere meaningful or comfortable for you, that will be able to accommodate the people that are important to you.

Obviously, this is the one I care the most about. I like food. JC likes food, so we wanted some nice treats guests would like. bit again, our involvement was limited. If you’re a control freak (like me), this might make you uncomfortable. Best figure that out early. Our engagement party was a combination of homemade and catered food, treats from Sultan of Samosa, Vegan Sushi from Joe Yee’s (9688 Leslie, Richmond Hill, ON), sweet treats from Vegan Danish Bakery and Bunner’s Bakery, as well as several salads, and fruit plates. We also had a gluten-free cake from Bunner’s. We’re lucky that there are several other options in Toronto. Since our engagement party in 2012 there are even more vegan small bite catering options in the city. Some other choices in Toronto (some I’ve tried, some I haven’t, and this is by no means an exhaustive list.): Depending on your family or who is throwing the party, you may be faced with the question of whether to serve an entirely vegan spread. Some people don’t think it’s a real party without meat or dairy, and I’m sad for them, but they do exist. This wasn’t an issue for us as  okay, I am stubborn people.

For help with this, I’d suggest looking at the work of Colleen Patrick-Goudreau – especially this podcast on Keeping a Vegan Home, she shares some stories on how to set reasonable boundaries unapologetically and with grace.There is also this post from Rose Pedals Vegan Weddings on Navigating the People Part of your Wedding.

If you need ideas and inspiration for food, check out the engagement party stories I’ve linked to at the bottom of this post. There is also this easy idea inspiring list from the Vegan Society for vegan party foods.

Engagement parties, like most parties that aren’t straightedge, end up having alcohol at them. Sometimes people don’t care about whether their alcohol is vegan (or don’t realize there are non-vegan aspects to filtration and the like), so your mileage may vary on this one, but I referred to Barnivore or contacted the company for most of the wine and beer we bought and shared at our party. You might want to create a custom cocktail or other drink for your party. We didn’t do this for the engagement party, but we are playing with the idea for the wedding itself (shhh spoilers). But seriously, check out the alcohol alchemy Get Sconed has been doing if you haven’t already. And get inspired.

One of my favourite ideas is from Herbal Infusions Tea Co. They make and run workshops on tea infused/containing cocktails, I stumbled on a post from Adventures in Tealand. Looked like a lot of fun!

Parties can be stressful, engagements, weddings and the like can carry with them a lot of expectations and baggage from nearly everyone.  Don’t sweat it (too much) if you can help it.

Remember to take care of yourself, and remember that this party is not just for your friends, but it’s about celebrating the love you and your partner share, and the next big step you’re taking together.

If you’re an introvert, read this post about introverted weddings on Offbeat Bride. This applies to nearly all the wedding related events you’ll be going though. (also, I’m just going to put this here too so I don’t forget: Surviving the Week Leading up to the Wedding as an Introvert.)

Personally, I’m more of an ambivert, but it varies with the circumstances. Parties are usually my jam if I’ve had some input in making them happen, otherwise, it can go either way. Maybe you’re like me? Either way take care of yourself and your partner. This is supposed to be fun, so make sure it’s working for you.

I hope you found this little guide helpful. Please feel free to ask more questions via email or in the comments, especially if you’re in Toronto.

If you missed it, check out some more of the vegan wedding resources I posted on Day One of Vegan MoFo.

Until next time,
Happy Vegan MoFo!