You know those times when you have a great idea as you’re falling asleep and think – whoa, I should really write this down so I don’t forget it… but then you wake up the next morning not having written it down, remembering only that you had a great idea, but not the idea itself? That’s me most of the time. This morning, I remembered this magical idea, and actually started the process towards making it happen. So at the top of the Things I love on Thursday, it’s that.

I’m sitting in Tori’s Bakeshop, writing today’s TILT. It’s one of the dairy-free, egg-free, meat-free bakeries in the city, and I think that’s pretty swell. I was here the day they opened just over a year ago (they celebrated their 1 year anniversary on Saturday), and I’m happy to say that they appear to be thriving. Sure I had to take a streetcar for 45 minutes to get out of my nice cozy Trinity-Niagara/Parkdale neighbourhood cocoon, but that’s not so bad. Especially since reading on the streetcar is just another one of those things I love to do anyway (in theory – but rarely in practice.) Try reading on the Queen streetcar at rush hour and tell me how it goes. From experience – it’s not so great actually.

I had one of the Bakeshop’s now famous Coconut-Lettuce-Tomato sandwiches, again, and every time I eat it, I’m transformed back in time to the first time I ate the vegan “B”LT chapati at Aux Vivres in Montreal in the summer of 2008, based on the same tasty smokey coconut premise. But what’s been on my mind this week is how much I love co-ops. Besides enjoying the general idea of mutual cooperation, consumer empowerment, and some level of involvement in what businesses or groups I’m involved in or purchase from do, I like their tendency to have relatively cozy atmospheres, even when they’re big spaces. Plus their tendency to be a place where interesting food related things happen (and where local producers can sell their wares in a small scale friendly place.)

My first food co-op was the Steep Hill Food Co-op in Saskatoon, Saskatchewan in 2007. I was in university, vegan in a city that wasn’t overtly vegan-friendly, and living on a budget. Steep Hill was a very very short bus ride away from my school, and I’d go every once and a while to pick up some staples, or some of my usual “weird vegan hippie”  stuff. They had produce, and dry goods, and sweet treats, and most importantly, it felt homey. It wasn’t Superstore or Sobeys, and that was a good thing.

The staff were all volunteers and were so consistently grumpy to the point that it was just hilarious. Even when I came in to do a volunteer shift, it was still kind of a weird half-nice, half- not nice combo. Maybe it’s just me being romantic about my time on the prairies, or it might be because I’ve gotten used to Toronto surliness – regardless of how I felt at the time, in retrospect it makes me laugh.

Of course, Toronto has several cooperative grocery options. Since I’m a west-ender, the two I’m most familiar with are the West End Food Co-op (which I clearly. can’t. shut up. about. etc.) and Karma Co-op.

I live reasonably close to both stores, but admittedly, we go to WEFC the most – JC and I have been members ever since we took a Fermentation 101 class before the co-op store on Queen Street & Dufferin even opened.

I met some of the folks from Karma Co-op at last month’s YIMBY festival, but I had only visited the store once before with a friend that lives in the neighborhood. It’s one of those situations where I kept meaning to do it, but kept putting it off until what amounted to never. And I probably wasn’t alone in that. In case you haven’t heard, Karma Co-op has been having some trouble, and may not be able to keep it’s doors open for much longer. They’ve made a major call out for support & membership, and after a member shared a letter from the Co-op on Reddit – the Star and other news media also picked up the story. And it sounds as though they’ve had a lot more visitors in the last week (myself included.) Even as I was visiting the CBC was doing interviews with other patrons.

I wandered around the store for an hour, checking out the produce and other random vegan/organic/fair- trade stuff. So if you haven’t been yet – do it! I’ll be back. It’s just a very short walk from Bathurst TTC station. “Bring it on down to Veganville.”
I was watching Saturday Night Live last Saturday, and actually enjoying it. But then this magical segment comes on. Justin Timberlake is dressed like a tofu cube. I wonder – is this real life? Is this really on TV? And there begins the veganized medley of songs. So Good. 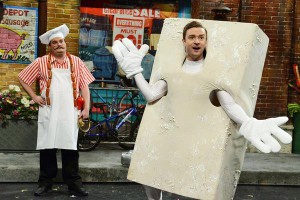 (it’s sideways – I don’t know why, but it’s higher quality sound than other versions.)

PomDeter – Call Me A Hole.

Ever get those moments where you’re just wondering what’s happened to the world but in a bewildered awestruck kind of way? I’ve managed to have two such moments this week. Other than the SNL’s Veganville skit, here’s another one. JC, a friend & his daughter, and I were at The Hogtown Vegan for brunch on Sunday. All of a sudden PomDeter’s Mashup of NIN’s Head Like a Hole and Carly Rae Jepsen’s – Call Me Maybe comes on. collaboratively created from the minds of r/mashups. It’s the simple things in life right? Rejuvalac is in progress in my kitchen. I don’t know if I really “like” it yet, but I can’t imagine I wouldn’t. Innovative food stuffs I can make at home? Sign me up.

I’ve been watching the delicious looking work on Yummy Vegan Dinners, and getting inspired.

Hope you are having as awesome a week as I am, anything you love today?