I’ve spent the last few days wrapped up in a blanket, mostly wanting to eat cereal and soup. JC and I were both sick, and spent some time vegging out in front of the computer and playing World of Warcraft. I’m still feeling that weird sick disconnected feeling but it’s getting better.

The sickness combined with a slight dip in the weather has got me thinking of autumn and soup. Soup and autumn. From simple broth based noodle soups, to heavier lentil, sorghum, rice soups, we’ve been souping it.

After I posted one of my cereal based breakfast lunches on instagram, a friend sent over a  jar of homemade soup for my sick self to enjoy. Who says social media doesn’t work? (it wouldn’t be me by the way – I win with soup.)

So what better than to talk about ten of my favourite vegan soups of all time on this wonderful day 18 of VeganMoFo? This isn’t a top ten list of course, because I can’t create a hierarchy of soup. I’m also including stews in this list. Let’s not argue. It’s better that way. Some of these I’ve made myself. Some of these I’ve eaten elsewhere.

Two Ways. Homemade, and at the Depanneur. This french onion soup from The Depanneur triggered my French Onion Soup obsession during last years’ VeganMoFo. And it continues to this day.

I researched and read the history and the culture behind French Onion Soup, please imagine some kind of french onion soup montage of images where I’m fighting onions and burning vegan cheese with a blowtorch. It’s all very dramatic. But at some point, I had to make it at home, and I did. And it was delicious. For added authenticity, my future mother-in-law was kind enough to get me some bakeable brown french onion soup bowls with cute lids for my birthday. Something I need to fix in my life is that I still haven’t made soup in those bowls. Tis the season.

Every Vegan Soup at Soupalicious

(though the below from Vert catering was my favourite in 2011) There is this wonderful soup based event that I haven’t been able to attend (and will not be able to attend this year either) devoted to soup. If you’re any where near Toronto it’s worth going to Soupalicious, please eat some soup for me, and tell me all about it. If you’re curious it’s happening on Sunday September 29th this year.

(p.s. Some vendors have a weird idea about what vegan means so beware of honey and other mysteries. Most people are super nice and will talk soup with you. I miss you Soupalicious.)

(here is a recipe but not the actual recipe from Aux Vivres but still yummy looking.) For a month or so in 2009 I lived in Montreal and developed a mad love affair with gazpacho. But only one gazpacho. The one from Aux Vivres. Cold, with avocado cucumber, lime, and cilantro. Sometimes when summer hits, I have strange cravings for this soup, and if you’ve ever had it, you probably know why. (p.s. It’s delicious) What can I say? This is a hit. I was attempting to review Betty Goes Vegan for the now dissolved Vegan Police website when I stumbled upon this recipe and knew it would have to be made. Especially so soon after my positive discovery of melty daiya + soup in the above French Onion Soup. This was sent over to me by a friend in early 2010, I don’t know the origin of this recipe, but it’s been passed around via email for several years now, it’s been modified by me, and friends, and there are a large variety of similar recipes online.  Follow your heart.

How can a blend of peanut (or almond) butter, kale, potatoes, chickpeas and/or lentils be anything but good? When I think of this stew, I think of winter, and the wonderful combination of warming flavours the stew contains. It’s hearty and comforting. When JC was wooing me early in our courtship, he cooked me dinner. As part of the meal he made a roasted butternut squash soup, by actually roasting butternut squash, and boiling it until it was delicious, he even topped it with a few dollups of homemade cashew cream.

Did I mention this was before he went vegan? Obviously I was extra impressed with his efforts at cooking a several course vegan meal we could share and enjoy together, and he picked up on the fact that the quickest way to my heart, was through my stomach.

I took this picture of my soup with my phone when he left the room so as not to appear weird (even though he already knew I was weird).

I’m pretty sentimental, but this was also one of the best soups I’ve ever eaten. I think the secret ingredient was love (or at least a little bit of strong-like). That or it might just be that fresh & roasted butternut squash is basically magic.

Preferably made by my mom. Also made by Emily Zimmerman (at the Depanneur). Oh beet soup, symbolic of my heritage, makes your pee pink (thanks betacyanin!), and can be served in so many different ways,  you can choose your own beet adventure.

More broth? No problem. Want greens? Check out those beet leaves. Want lots of texture? Shred those beets! Sweet? Do nothing. Beets are sweet. Sour? Throw in some chopped pickles. You can do whatever you want, and it’s probably going to be tasty.

Corn Soup from One Love

Recipe from One Love Soup, Toronto They can’t serve their magical corn soup in a regular bowl anymore, but it doesn’t matter, this soup is so good in any container. Bet you can’t eat just one (bowl.) Sitting close to it you can feel the warmth and the spice as it hits you with a powerful olfactory punch making you salivate and preparing you for the rich flavourful spoonful ahead.

Made with lots of corn and corn cobs, carrots, Jamaican pumpkin, Yukon gold potatoes, peas, beans, and more corn, it’s such a perfect soup. You should try it. The Tom Yum Soup at Padmanadi is aromatic and fresh with powerful flavours of spice and lemongrass. There are bits of meat analogues like shrimp and other not-sea food, combined with carrots, tomatoes, and other vegetables. And the occasional bright red tiny pepper.

I have yet to find an adequate replacement for this here in Toronto, so if you’ve got suggestions, I’d love to hear them. Though until then, I’m tempted to just order a large bowl of this for myself the next time I’m back in Edmonton.

and only this one from Crudessence, Montreal JC and I visited Montreal a few years ago, and had the opportunity to visit Crudessence, a raw vegan restaurant in Montreal. And I’m just going to come out and say it; I generally don’t like Miso soup. Maybe it’s because it’s usually on the boring side, or because there are often fish flakes lurking in the soup that people don’t admit to.

This Raw Miso Soup from Crudessence was the best miso soup I’ve ever had, raw or otherwise. With raw sliced mushrooms, seaweed, and scallions floating around in an unexpectedly warm miso broth. 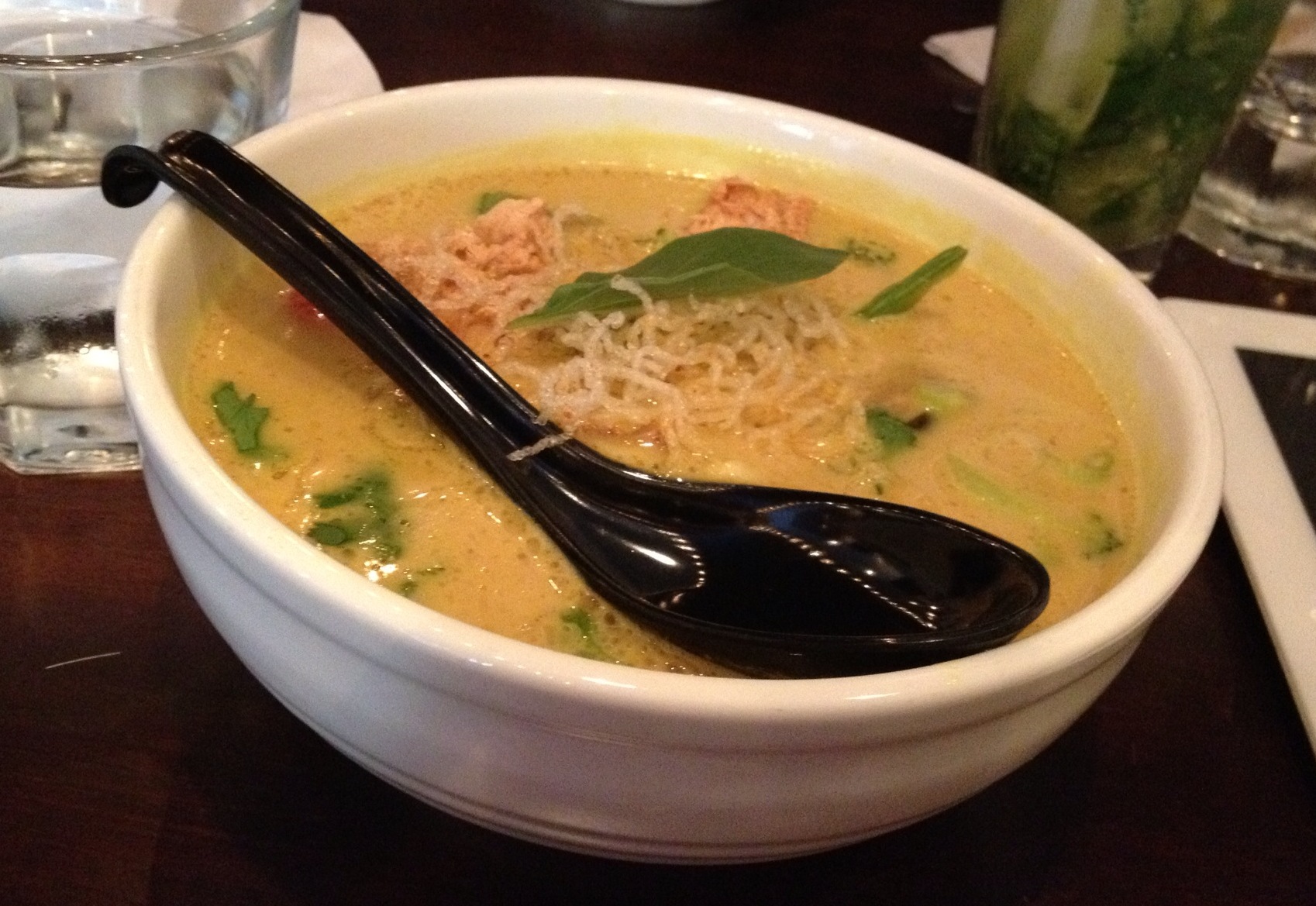 Laksa is a vegetable and coconut milk based soup, with the blended flavours of galangal, turmeric, shallots, garlic, ginger, lemongrass, and kefir lime leaves.  There were rice noodles, little tofu puffs, snow peas, chopped red pepper, and surprise eggplant bits. It’s spicy, but not too too spicy.

from Golden Turtle or Pho Huang

There are a few vegan sources for Pho in Toronto, two of those places are places we go to at least once a month. Golden Turtle is on Ossington, Pho Huong is in The Junction. Both have equal yet different offerings. Both are perfect if  you want a giant bowl of broth and noodles and vegetables.

Now that I’m hungry for soup, and can’t wait till lunch, do you have any favourite soup recipes you’d like to share? What is your go-to soup when you’re sick?

7 thoughts on “Soups I Love Thursday (Ten of Them) #VeganMoFo”