Home calgary Roadtrip 2014 – Calgary, The Coup, and Phil and Sebastian.

Roadtrip 2014 – Calgary, The Coup, and Phil and Sebastian.

I’m continuing my series of posts from our Summer Roadtrip in 2014, you can see some of the past & present posts on this helpful map on Pinterest, or just click on the Roadtrip 2014 tag

After Drumheller, we drove on to Calgary, with a brief stop at an incredibly windy power station along the way. The weather was stormy, but it was easy to see why there were so many wind turbines out in the fields. Our first stop was The Coup – a lacto-ovo-vegetarian restaurant that’s been serving meatless meals in Calgary since 2004. It was a frequent enough stop for me, when I still lived in Edmonton, and it’s changed and evolved a bit over time, but has maintained a very similar vibe. 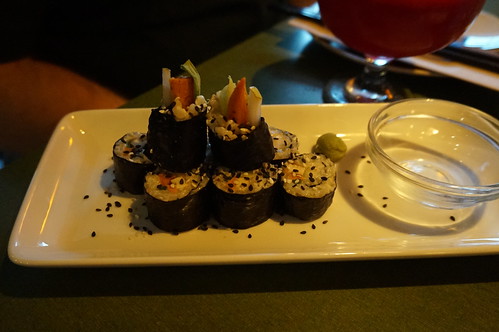 It was nice to pop in and see it again with JC. We got a seat right away, I’m sure coming in on a Tuesday evening helped, and started with some cocktails and the pseudo sushi. Which was yam, green onion, marinated tofu, with pear and ginger rolled up in organic brown rice, served with a spicy soy sauce. But they have something new on the menu since we were there that’s pretty fantastic looking – something called Waffle Sushi. You should check it out! 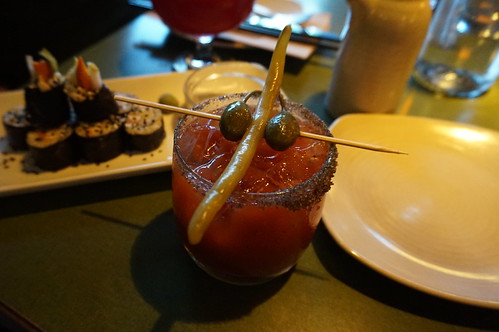 Any time I’m at a restaurant or bar with a spicy tomato based cocktail, I order it, so I had a gin smoked tomato mary. It was fun – I liked the pickled bean with the capers, and anything with a spicy smoky tomato wins in my drinking heart (well really – I love tomato juice in general – it’s not just for airplanes.) 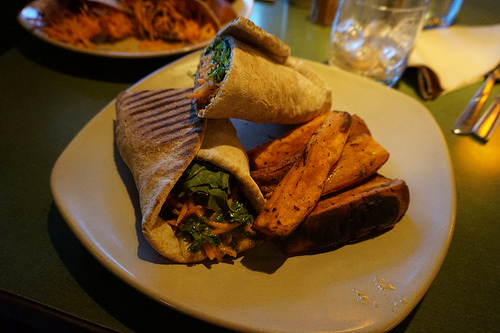 JC ordered the Tempeh Shawarma, which isn’t vegan by default so you’ll have to ask, but otherwise this was a bit of smoked & marinated tempeh, mixed greens, parsley, mint, carrots & drizzled with a spicy tahini sauce, wrapped up and grilled in a whole-wheat pita with a side of yam fries. 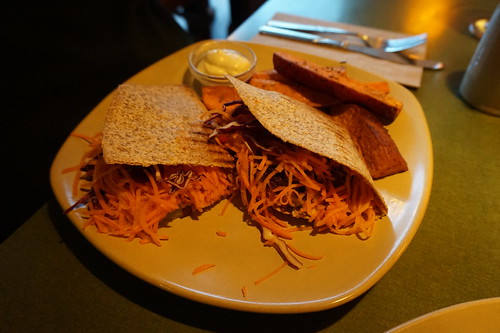 Veganized falafel, hummus, tahini, sundried tomatoes,purple cabbage, carrots, pickles, black olives & banana peppers, grilled in a sprouted tortilla. I got it without vegan cheese, and with a side of yam fries (yam fries are a good idea.) 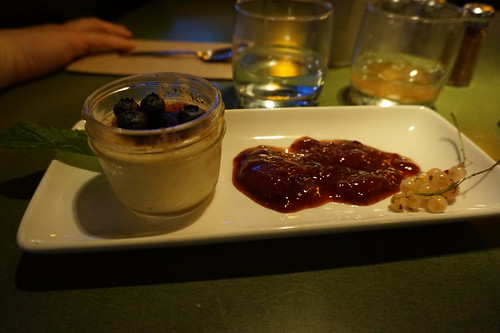 And finally, the Creme Brulee. That I didn’t like, because when it arrived, I realized what I had really wanted was a flan, so it’s not their fault. That said it was still quite good, with a solid crackable shell of flamed sugar, topped with a few blueberries.

We went because it was an experience, and it was one of the only vegan-friendly meatless places open late. The drinks at atmosphere were probably my favourite part of going to The Coup.

Afterwards, we were exhausted – having woken up in Edmonton that morning, explored Drumhellar for several hours that afternoon, and finally found a hotel to sleep in in Calgary.

The next day we checked out the Phil & Sebastian coffee shop on Marda Loop, and spent a few hours there sipping coffee and getting our fill of internet before we planned on hitting a series of national parks with uncertain wifi/wireless signals. You can find their coffee all over the country, and it was nice to visit the mothership and hang out in their bright friendly space. It was busy, and we gave ourselves a few hours to reconnect to our respective nerd worlds before getting back on the road. 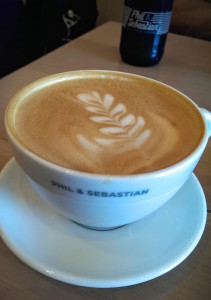 We had stayed a bit too long at Phil & Sebastian, and had to hit the road if we were going to make it on to Waterton Lakes National Park before the gates closed at our campsite (and still pop into Vulcan, AB.) I made car tacos on the road with stuff we picked up from Safeway (tortillas, a can of refried beans, chilis, salsa, and a bit of daiya) and we ate and drove on.