After Winnipeg, and before Saskatoon we took a trip to visit Riding Mountain National Park for a few days. It would be the second time we camped so far on our little adventure (the first was at a Michigan State Park,) but it would remain as one of the highlights of the trip.

As I reflect on the entire trip through Canada and the USA, I realize that most of my highlights and favourite places  are all in National Parks or places where we had an opportunity to see natural beauty and surprisingly did not generally include all the wonderful food places we visited (although that was nice too.)

One thing we weren’t ready for – mosquitos. People said there were mosquitos. But we didn’t really believe them until we saw the swarms in person. But that’s not fun. Let’s start at the beginning.

We woke up fairly early and started driving westward toward the park. I had booked a nice looking site online, through the parks Canada booking system, in Wasagaming. We had a tent and equipment with us, but I was really tempted to book one of the oTentik sites, because they’re kind of like cabins, but also still let you sleep in the wilderness. We decided to save the oTentik camping for another time. Spoilers: during the remainder of our camping visits, we never ended up near a National Park with an oTentik site again. Some day. Some day.

I had booked a site, but when we arrived it had a broken fire pit, so we scoped out the surrounding sites, and went to the park ranger to change. It was all very easy, and we set up our “home” for the next two days, which initially just consisted of a tent, but eventually also included a dining mesh tent we picked up in the town of Dauphin to protect us from the insatiable mosquitoes that had taken over the camp site. 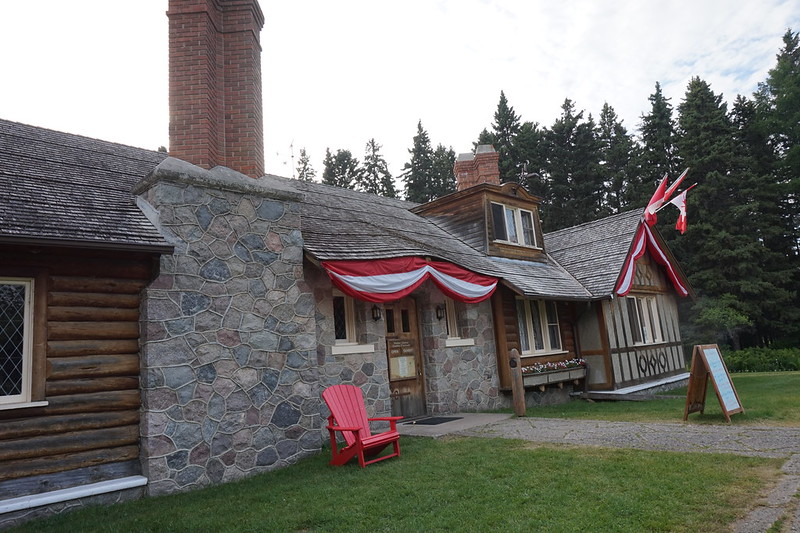 Our first day there we started with a trip into “town” – Wasagaming, in addition to the name of a campground area, is also one of the main town-sites in Riding Mountain National Park, it’s where you can find some of the basics – like food, drinks, gas, and some of the frivolous like touristy knickknacks and other souvenirs, postcards and things you can use in the lake (water wings, colourful disks, and other neon coloured objects).

We stopped into the main National Park office to look at the interpretive centre and spoke with some of the rangers about what we could go see in the park the next day, planning a visit to the bison zone and maybe Grey Owls cabin if we got there at the right time. They gave us a map, and illustrated a potential route for us, warned us about gravel roads. 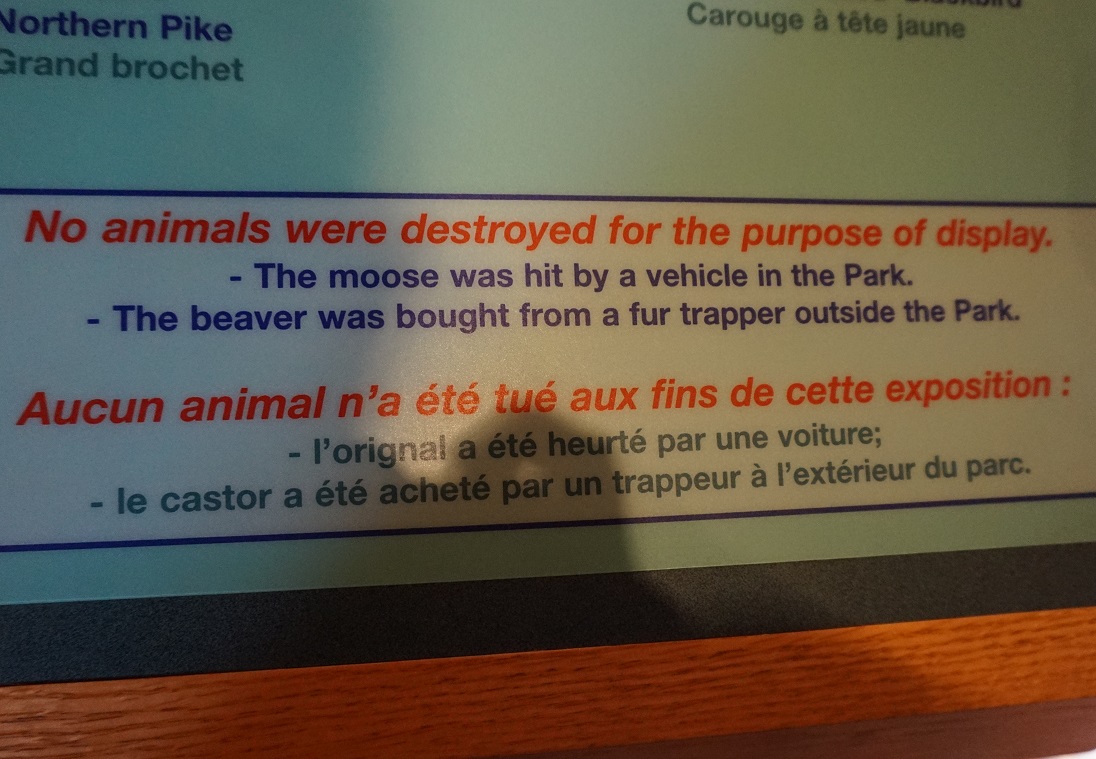 You might find it eerie to go into this office, as I did, because parts of the office have taxidermied animals with information on how they died. With an accompanying statement saying that these animals were not killed to become part of the exhibit, which I thought was probably an important point, but it was hard not to notice that all had a human impact component to their death (being hit by a car was a frequent one, but the ones “trapped outside of the park” really got to me.) 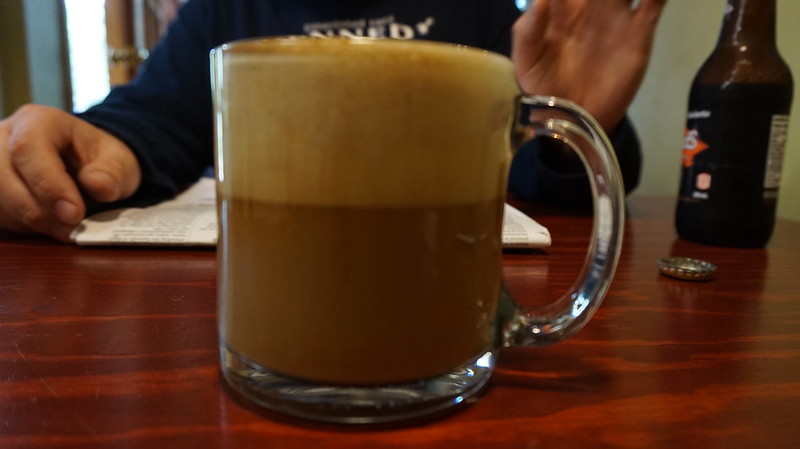 In town is also where we discovered there was a cafe, which we would visit every day – Siesta – for reasonably fancy coffee drinks, and most importantly, in our case, – a source of wifi and power outlets, as we had neither of those things at our campsite (which was probably for the best). It’s also worth mentioning that once you get into town, you can use the National Park Service Free wifi, so if you’d rather not spend your day inside, but still have email to catch up on – there is an outlet near the gazebo. You’ll know it when you see it. 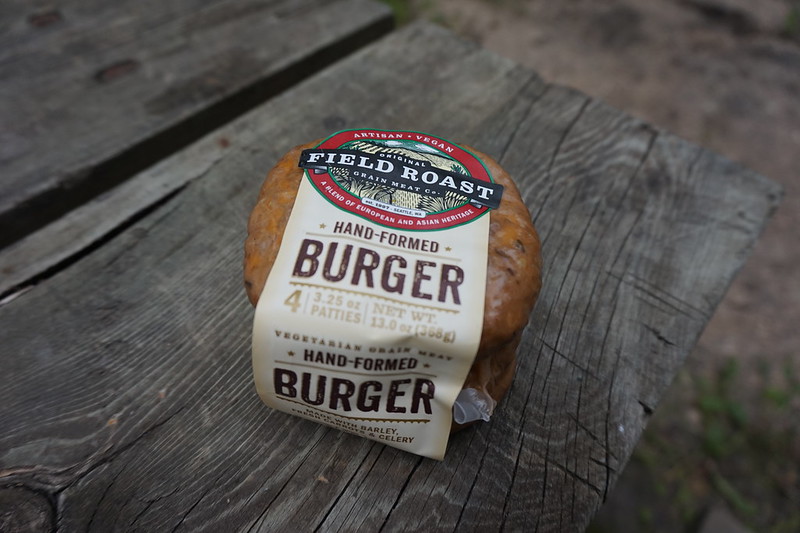 On our first evening there we had Field Roast burgers for dinner, ones we had picked up from a Whole Foods in Minnesota. (If you’re in Toronto and looking for some I’ve heard they’re still available at the Sweet Potato, and I bought a package at Evergreen on Roncesvalles.) 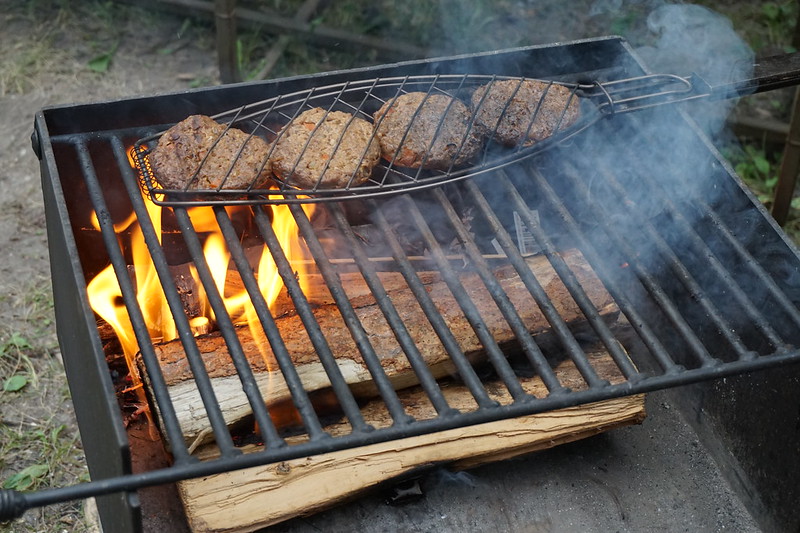 As you can see from this picture I developed new technique for barbecuing them on the grill, which ensured that our burgers didn’t get stuck or fall into the mystery grate that our camp fire was equipped with. 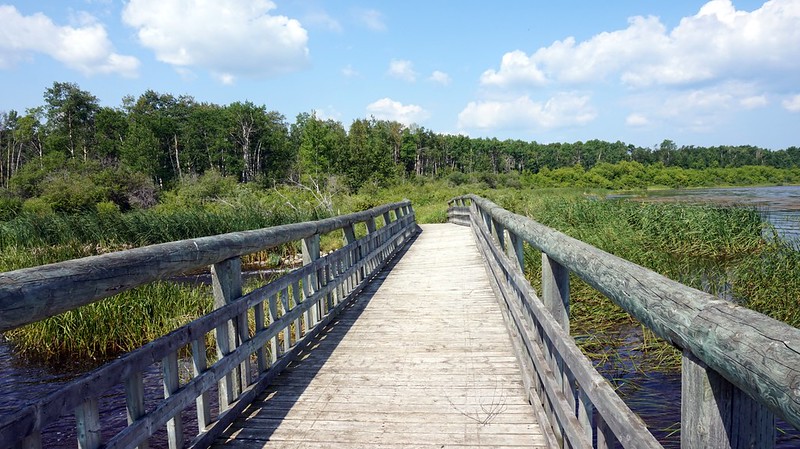 We spent a lot of time walking through the park, enjoying the lake, and occasionally returning to our campsite to eat something or sleep.  One of my favourite parts of the trip was visiting the bison park, it took about half an hour to drive up but it was worth it just to see this little guy. 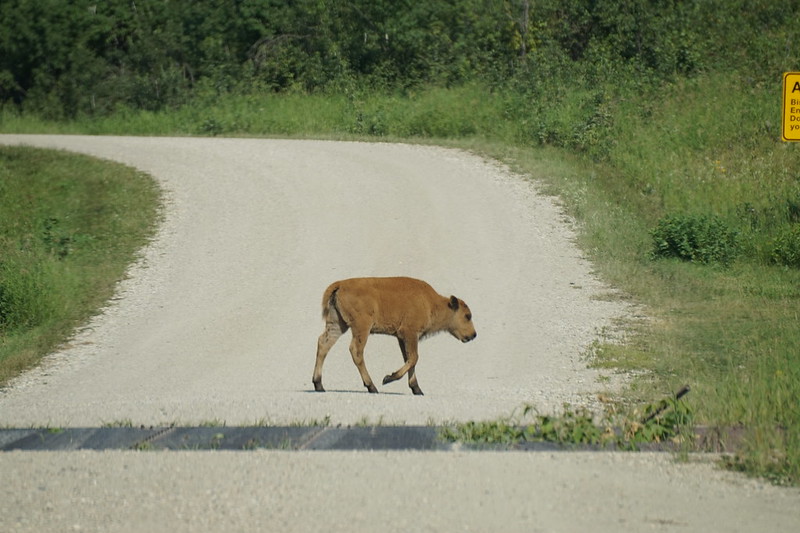 and also this guy. (Our “You Shall Not Pass” bison) 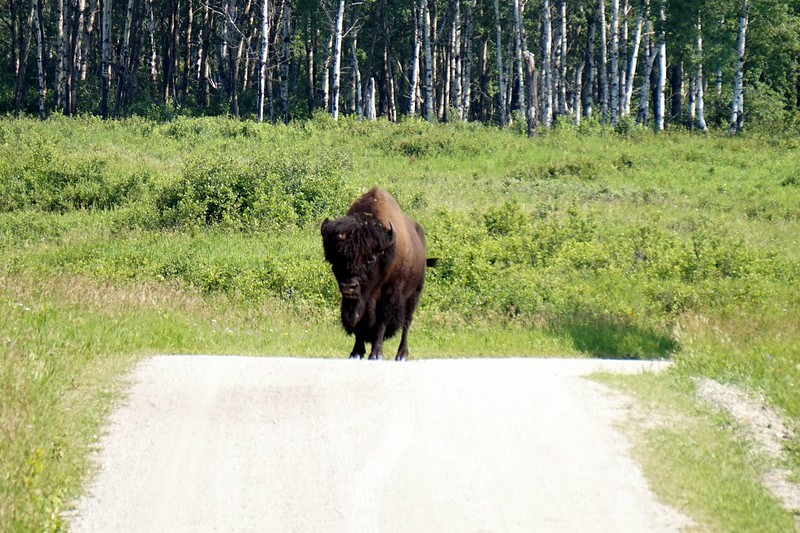 We can go early or late enough to see many bison but right at the entrance way there was a whole herd just hanging out in the shade. We also went up to the bison exhibit and viewing platform, which is where we saw a bunch of swallows nesting in the rafters. Watching the birds flit around with one of my favourite parts of visiting Riding Mountain National Park which is kind of funny considering we went to see the bison, but regardless it was beautiful. 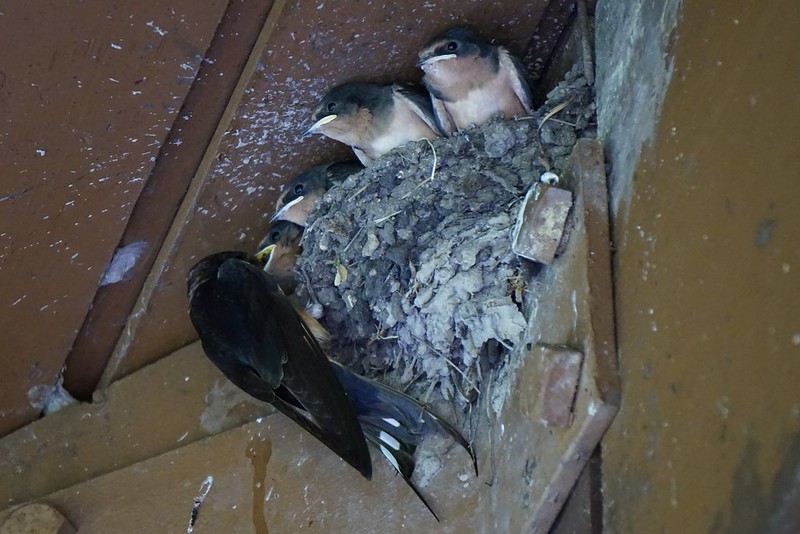 Even just standing in the viewing platform looking out into the Prairies was lovely (no bison were seen on the Prairies, but bison do what they want, and it was a mighty hot day.

Eventually we left the bison exhibit, and drove down to the Grey Owl trail-head, where we were probably attacked by what could’ve been a hive of wasps – there were lots of them, and they were not pleased to see us. Discouraged by both the wasps and the heat, we opted to keep going back into town, and back to Wasagaming. 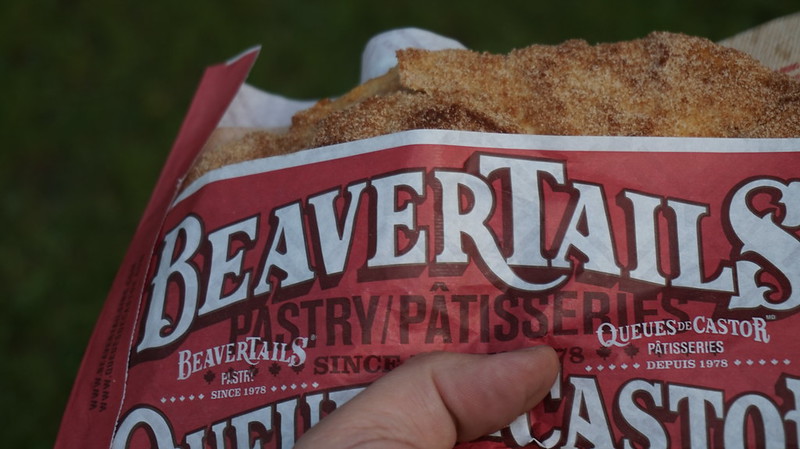 One thing I should mention about Riding Mountain National Park is that in addition to the grocery store, The restaurants and the café they also have a Beaver Tails location, when you may not realize is a beaver tails are vegan or can be vegan, if you ask them to skip the butter (and don’t get any of the obviously not-vegan varieties). So JC got one of those before we left. 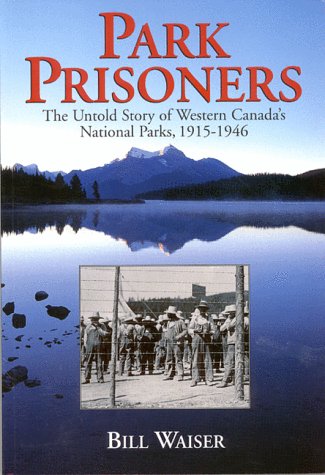 We also dropped back into the info centre which had a gift shop tucked away where I bought a mug for our souvenir mug collection, and this book “Park Prisoners: The Untold Story of Western Canada’s National Parks, 1915-1946,” which offers an eye opening look at the national parks, and pieces of the slightly darker parts of Canadian history. I tried to read parts of it as we were staying in National Parks along the way, but thus far it’s sat half read in the “To Read” pile on my night stand. 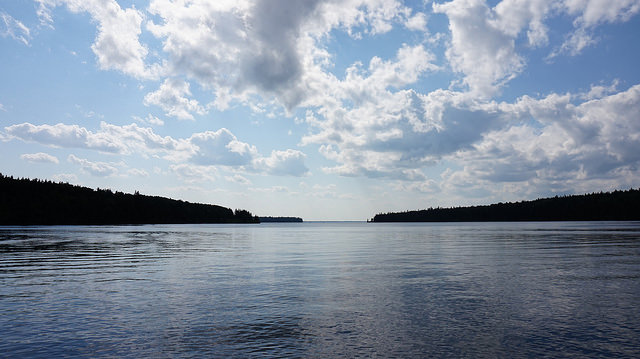 Eventually it was time to get moving and say good by to the beautiful clear lake at Wasagaming and drive on to Saskatoon, with a brief stop in Inglis too look at their historic grain elevators.