We spent a technology free(ish) weekend at the PieBird Birdhouse Cottage last weekend. 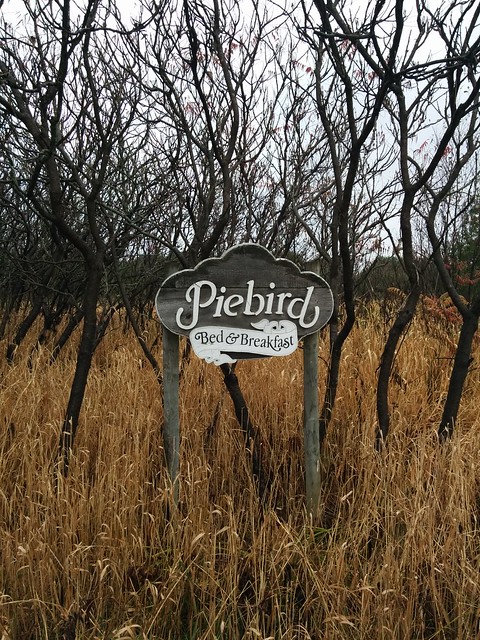 Piebird is a vegan Bed & Breakfast, farmstay, and farm sanctuary in Nipissing, Ontario – now the furthest North in Ontario I’ve been so far. They share their land with cats, chickens, goats, and a couple of turkeys. We had a lovely time. I say technology free(ish) because we still used our phones in airplane mode as cameras, and we were still using things like stoves and fridges. This might not seem like a big deal, but JC and I are attached to our phones, for work and daily life, so around 48 hrs without any internet wasn’t difficult, but it felt noticeable and quite relaxing. 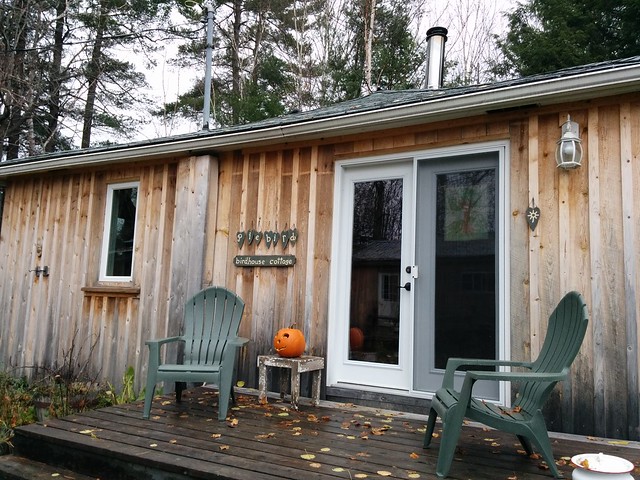 On our way north to PieBird, we stopped in Barrie and grabbed a couple of Boon Burgers to go. The cool thing was that I was able to order our meal in the car on the way, without calling, with the boon burger mobile app (available for both iOS and Android). Once we got into Innisfil, I placed our order, the app gave me an estimate of how long it would take, and we drove over, picked up, and were back on our way in a few minutes. 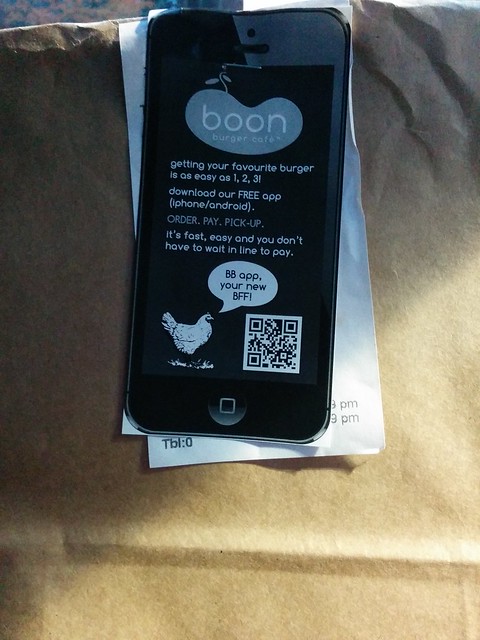 Piebird is only around 4 hours away from Toronto, but it’s like entering another world, We got to take in a beautiful drive through beautiful colourful wooded areas, but half of our drive was in the cover of darkness (the bad part about leaving in the evening on a Friday in the Fall, especially before the time changes.)

We arrived at the Birdhouse Cottage in the dark and were greeted by a scraggly looking and extremely friendly kitty (named Muffin), who encouraged us to get comfortable and eat our burgers while she watched from a chair in the living room. 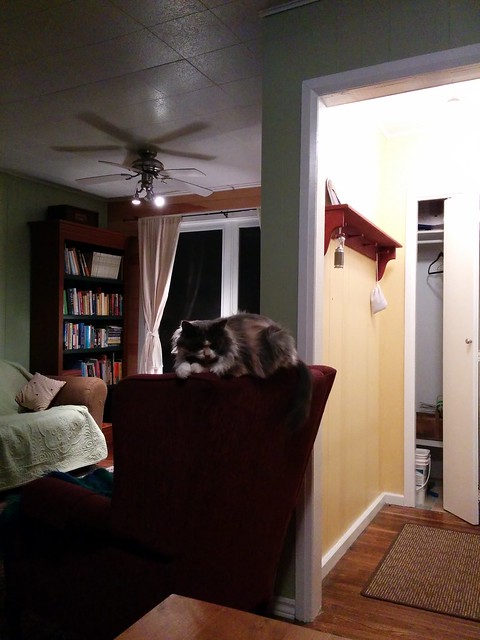 After we had dinner we perused their ample book selection, with a great assortment of homesteading, vegan cookbooks & commentaries, and what seemed like several books off of the New York Times best sellers list, so there was something for nearly anyone to enjoy. I came prepared with next month’s Vegan Book Club Book – The Longest Struggle and managed to read most of it at the cottage, but since returning home, I have not picked it up again. 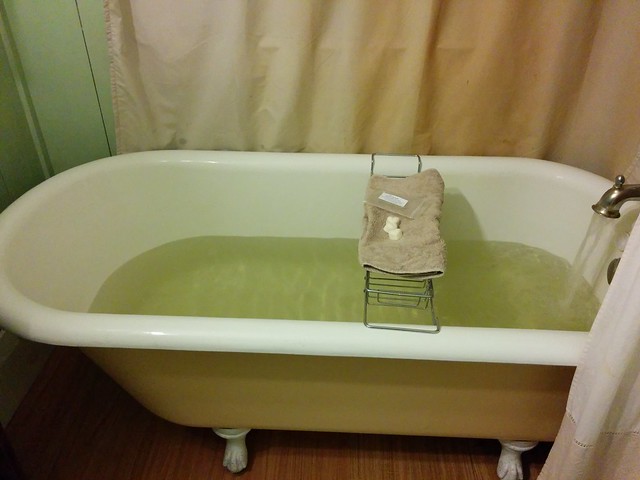 Then I filled up the clawfoot bathtub, because I was looking forward to this moment ever since we booked our stay at Pie Bird. Because I love baths, but also feel bad for taking them, which I’m sure I’ll mention every time I take a bath, but it will probably not stop me, but I do try to limit them to once or twice a month. I brought along some Just the Goods bath bombs with me, and filled up the tub. The water does end up smelling a bit like iron, like you might expect from well water – but my “romantic vegan bath melts” did the trick. 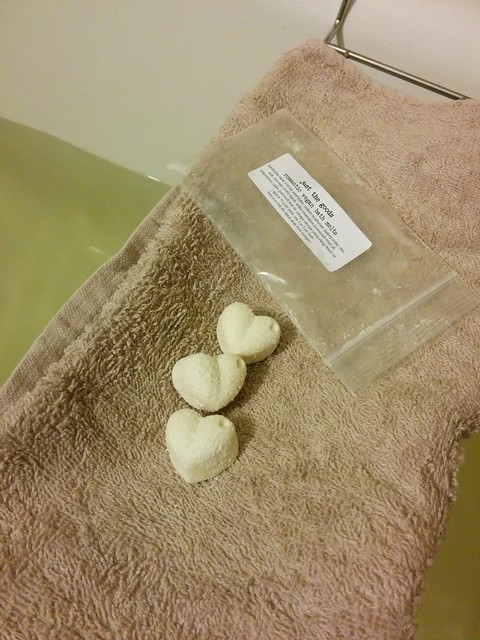 The next morning we were woken up by sunshine… (not the goat) I made breakfast (because the cottage conveniently has a kitchen) and later that day we met Jan and Sherry, plus the goats, chickens and turkeys, and another kitty, a short hair ginger and white cat, named Acorn. 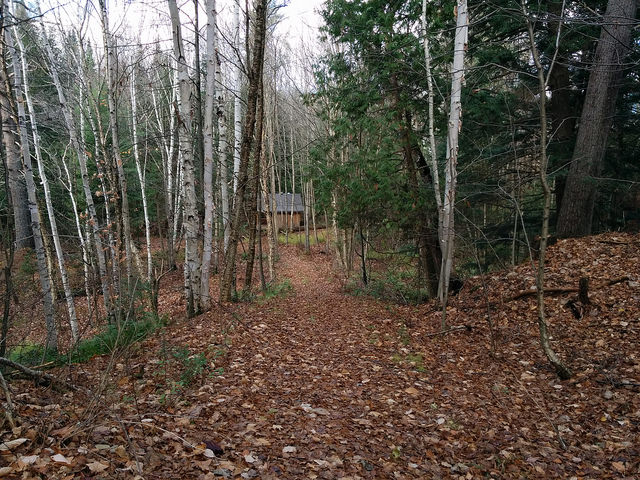 We walked along the creek along a combination of leaf covered pathways and a boardwalk seeing the sauna that guests can make use of, and the canoe that folks can use to paddle in the creek. This is also where the sauna is (which we’ll have to make use of next time we visit!) 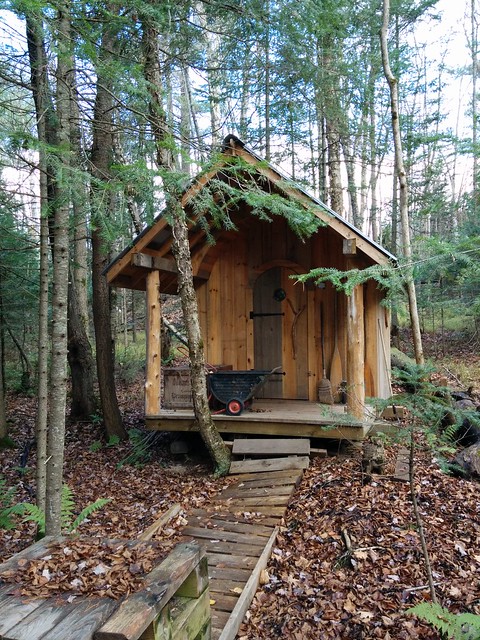 We kept going until we reach the main pie bird cottage, said hello to Jan (who was making an impressive chicken coop) and saw the chicken trio clucking along the property. The head chicken, Roy, separated from his crew and came to check us out and we walked along with him until her rejoined his companions and we headed over to say hi to the goats. 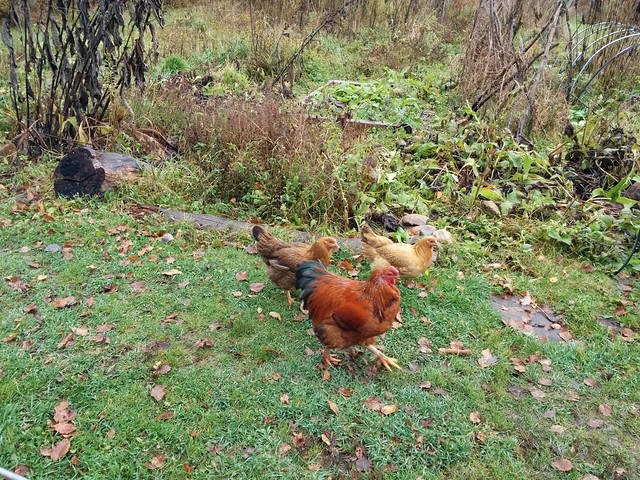 Jan introduced us to everyone, and I immediately decided that my favourite goat was Momma Bill (probably because he reminded me so much of Kes.) Sadie was curious and the famous Sunshine came over to give us the once over. I’ve decided that Sunshine is probably the most majestic goat I’ve ever seen (and oddly enough – I’ve seen some goats.) 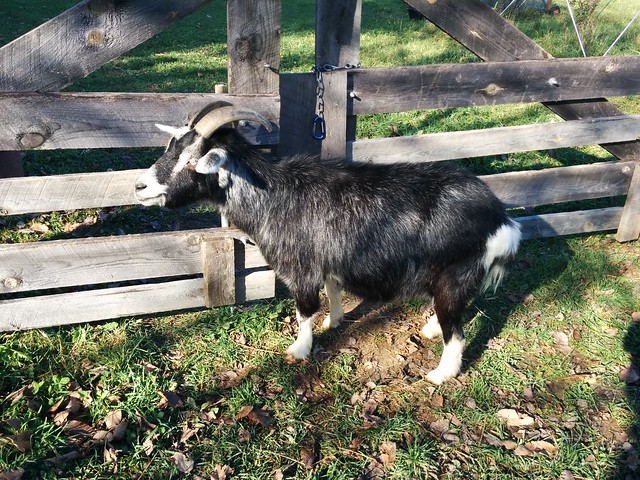 Sadie goat came by to say hello and walked along the fence with us for that until we got to where the turkeys lived listing to Fernando make his turkey chatter with you occasional sound from his other turkey pal Rosie. There is something really pleasant about hanging out with turkeys – I’m not quite sure what it is, but I’ve noticed with every Sanctuary visit (or even when we saw wild turkeys in a Michigan park) I just really dig them. 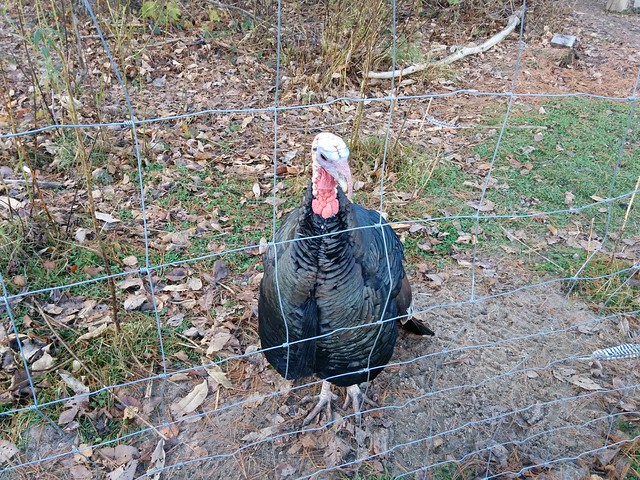 There is a log in the pasture where we sat and watched the goats nibble at the grass in the sunshine and watched Acorn roll around in the sand. 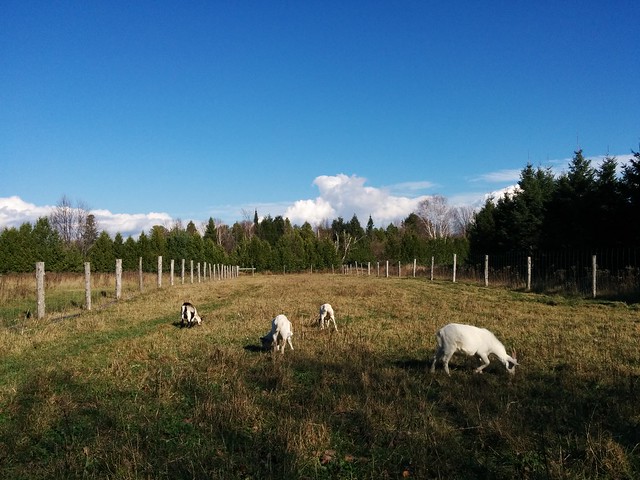 We had to have at least one meal at PieBird. Dinner started with the sunflower pate with sliced carrots, golden beets, sun root, and a few slices of Sherry-made spelt bread with sprigs of mustard greens as garnish which we ate anyway (it was spicy – yum.) 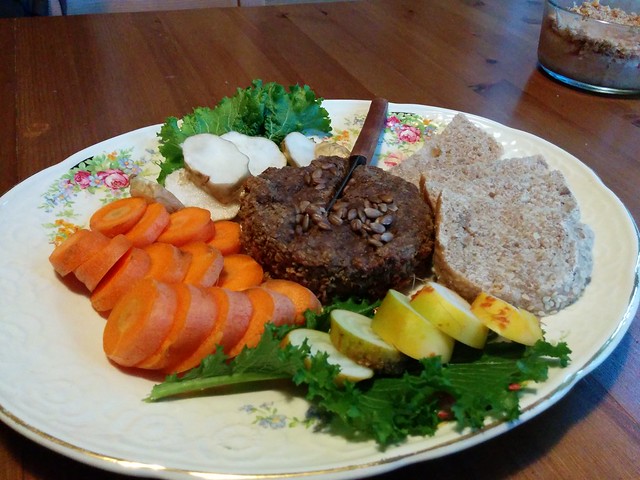 Next week had hand pies with rice, cauliflower, and hubert squash and a purple sauerkraut and chutney on the side. 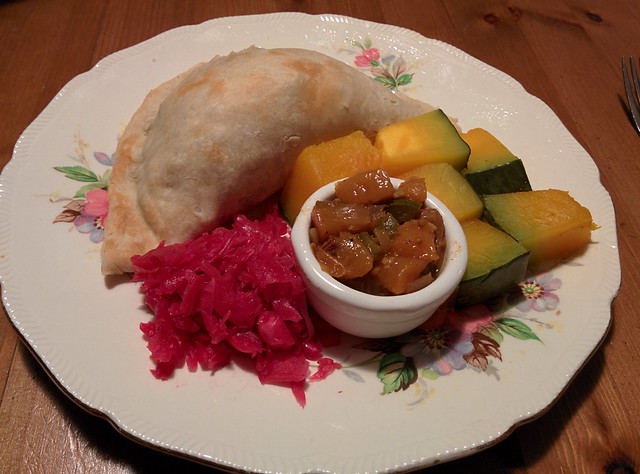 Desert was an apple crumble. Which is generally the fastest way to my heart. 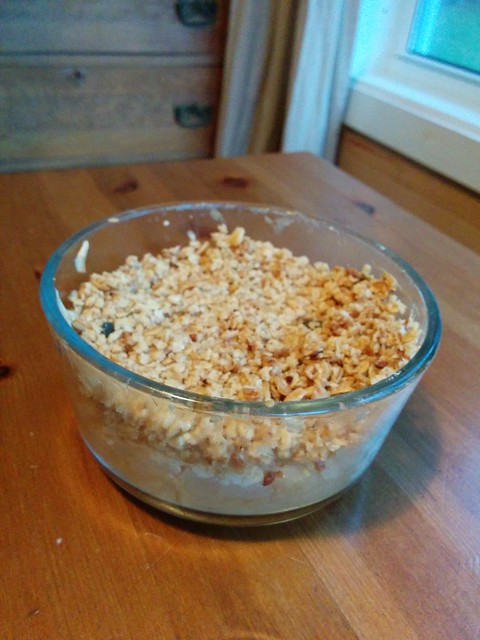 It was tough  to leave but eventually it was time to go home. Jordan made breakfast, we said goodbye to everyone, packed up our things, and started on  our journey back home to Toronto, and Sherry gave us a cookie for the road. 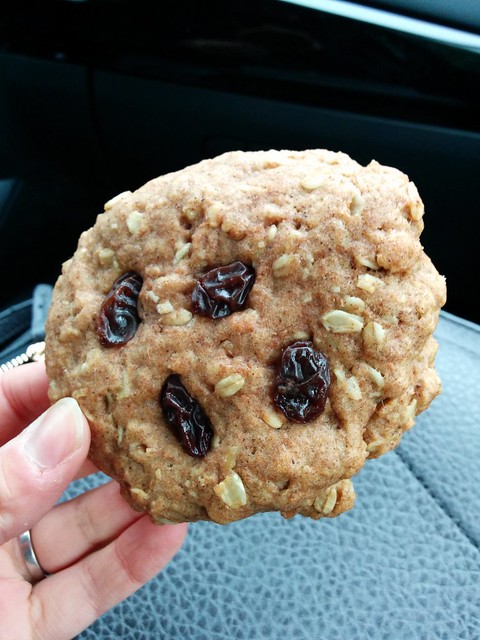 But of course on the way we would be passing by Barrie once again so we decided to stop at Boon Burger, and dropped off some of those beautiful colourful Piebird postcards. I tried the fantastic Oslo burger, which should probably get its own post.

Overall, we had a beautiful time at Piebird, and I look forward to visiting them again very soon.