Let My People Eat – Passover Supper Club at The Depanneur

JC and I started going to The Depanneur sometime in early 2012, and have been enjoying it ever since. One of my favourite parts of The Dep are Emily Zimmerman’s Wednesday Veg Out Nights and every time she does a supper club evening – especially when it is drawing upon Jewish culinary traditions (such as during Hannukah and Passover.) 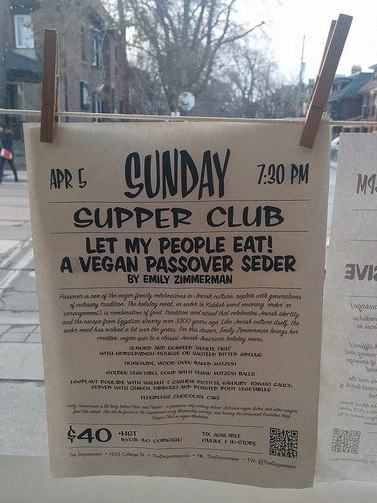 Yesterday we went to the Depanneur’s Passover Supper Club evening, after excitedly buying tickets last month as soon as they became available. We went last year and had a great time, and I suspect we will just keep going to all future ones too. One of my favourite annual food events.

So, there was a great crowd last night, which is a unique aspect of the supper clubs, you get to sit at a long table with strangers. While supper clubs at the Depanneur are not always super chatty, the option is always there – and this one definitely was. It was nice to see some familiar faces (like Cassandra & Erica)  and some folks from completely different spheres at the dinner last night, conversation was lively and friendly- even though many of us had only met within the hour. 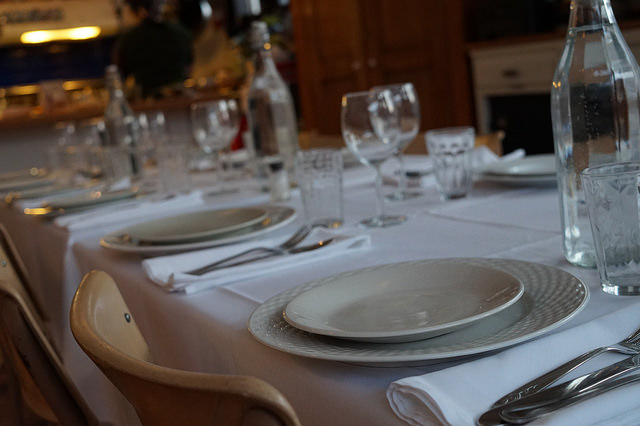 Anyway, I was a big fan of the evening so really, this is about what we ate. I liked everything, and had a great night. If you like what you see – I recommend visiting one of the vegan supper clubs at The Depanneur or testing the waters with one of the drop in vegan dinners on Wednesday evenings.

What Was on the Menu?

Let’s get into the pictures… 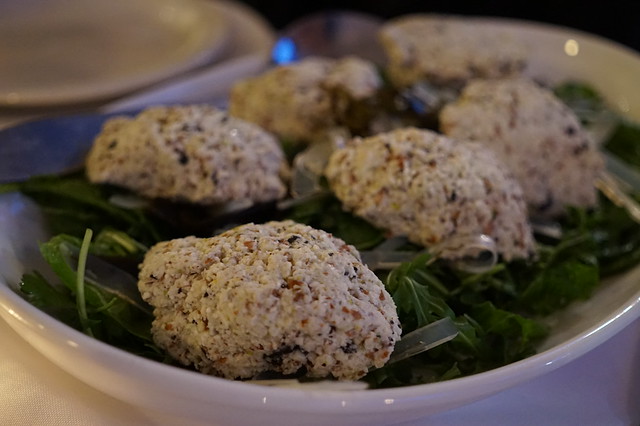 I loved Emily’s Okara Gefilte fish last year, and still think of it sometimes, but this year almond and seaweed “gefilte fish” with horseradish mousse on sautéed bitter greens was pretty fantastic too (though I think I want the okara again sometime soon) The horseradish mousse is again, something I think about fondly, and it pairs perfectly with the gefilte fish.

The interesting thing for me, is that when I was searching for recipes for gefilte fish earlier this week, I found a few that were nut-based, but wasn’t sure what that would be like in the real world. Turns out, it works just fine, as I’m sure raw foodists could attest to. I still don’t really know what gefilte fish is, but I like these vegan versions a lot. 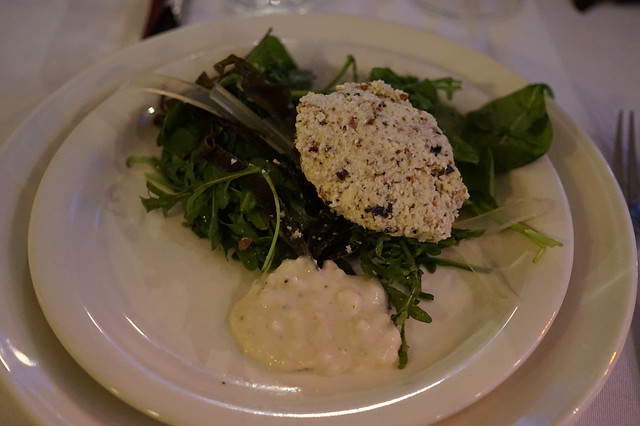 Next we enjoyed a hearty matzoh ball soup with an assortment of golden vegetables and parsley. After the first time I tried Emily’s matzoh ball soup – it really made me step up my game. Since it wasn’t really part of my traditions growing up, I had no reference point other than what I’ve seen most often. Usually it seemed to be a simple clear broth with a matzoh ball or two in it. Emily makes a hearty matzoh ball soup, and I’ve adopted that as my style too. The matzoh ball was tender and just on the precipice of falling apart, but somehow still maintaining its shape in the soup.While I’m keen on a denser matzoh ball at home, mostly because I don’t think I can do the balancing act of such a fluffy matzoh ball. 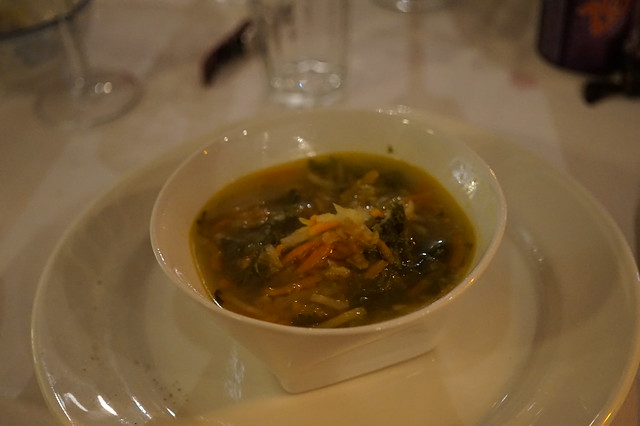 Roasted root vegetables, boring right? Wrong. Turmeric made this bowl of veggies shine all on its own. 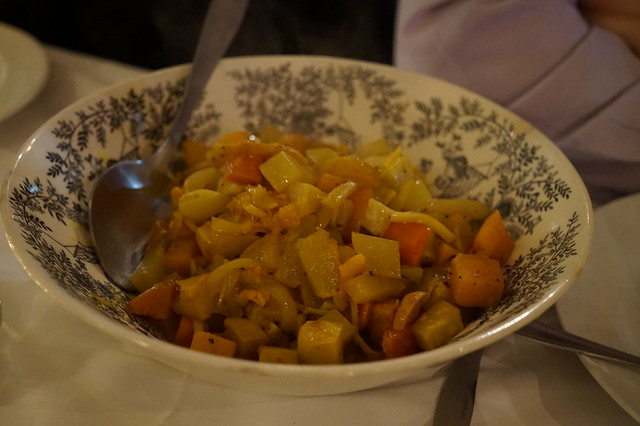 This was the Quinoa Tabouli. The big news in the Ashkenazi vegan world last year was the approval of Quinoa by the Orthodox Union, so here we are, eating the result. A tasty tabouli, full of veggies and parsley. 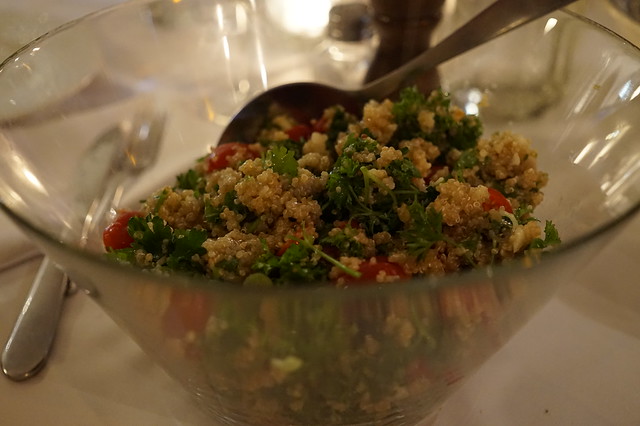 My plate of yummy food. What can I say. The eggplant roulade with walnut & cashew ricotta were exceptional. If I wasn’t so terribly full already, I would have wanted more. Crispy on the outside, stuffed with vegan cheese and tomato on the inside. Goodness. 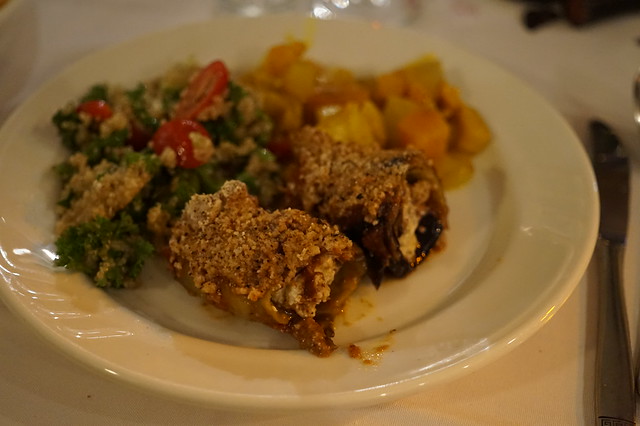 I was interested in dessert, but not particularly partial to it one way or another. My trend towards liking more savoury food items continues. My favourite part of this was the smoky coconut chocolate cluster on top (because despite loving more savoury things, I will always love chocolate.) 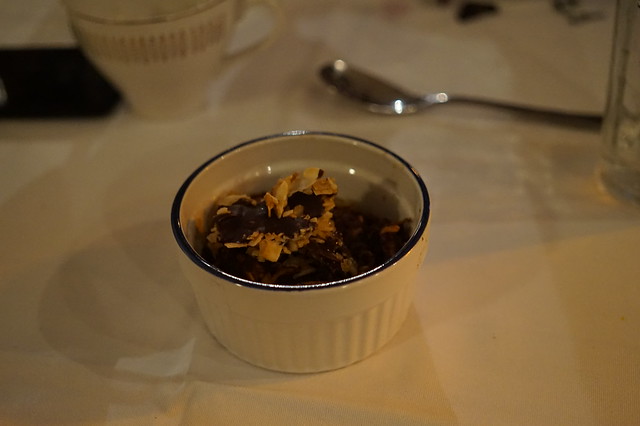 Bonus: One other thing I found out about at this Supper Club? There was a bottle of Magda Seltzer Water on the table, and apparently, this is the last Seltzer delivery service in Canada, and have been around since 1957. I’m a fan of fancy sparkling water, but haven’t really been buying any lately, and drinking primarily Zevia soda. Maybe this will change.

If you’re interested in getting your own Seltzer water on, you can call Frank Samel of the Magda Soda Water Company – at (416) 741-8848. (there is no website)