On a recent visit to the USA we picked up a whole bunch of soy/coconut/almond based nogs. Here in Ontario we have two varieties to choose from, and both are made by the Earth’s Own group of soy and almond milk companies – So Nice and Almond Fresh. Once upon a time there was a pretty nice third nog option called Vitasoy Holly Nog, but as I learned recently on their facebook page (“I’m afraid that all VitaSoy products in Canada have been discontinued.”) so I wont be seeing that product here anymore.

In the USA, things are a little bit different. There are several varieties. You want coconut nog, or almond nog, or soy nog? You got it. There is also the choice of different brands and different flavours of “holiday beverages”. When I walked into the Whole Foods Market in Cleveland Heights this is what I saw right after entering:

On To The Tasting. 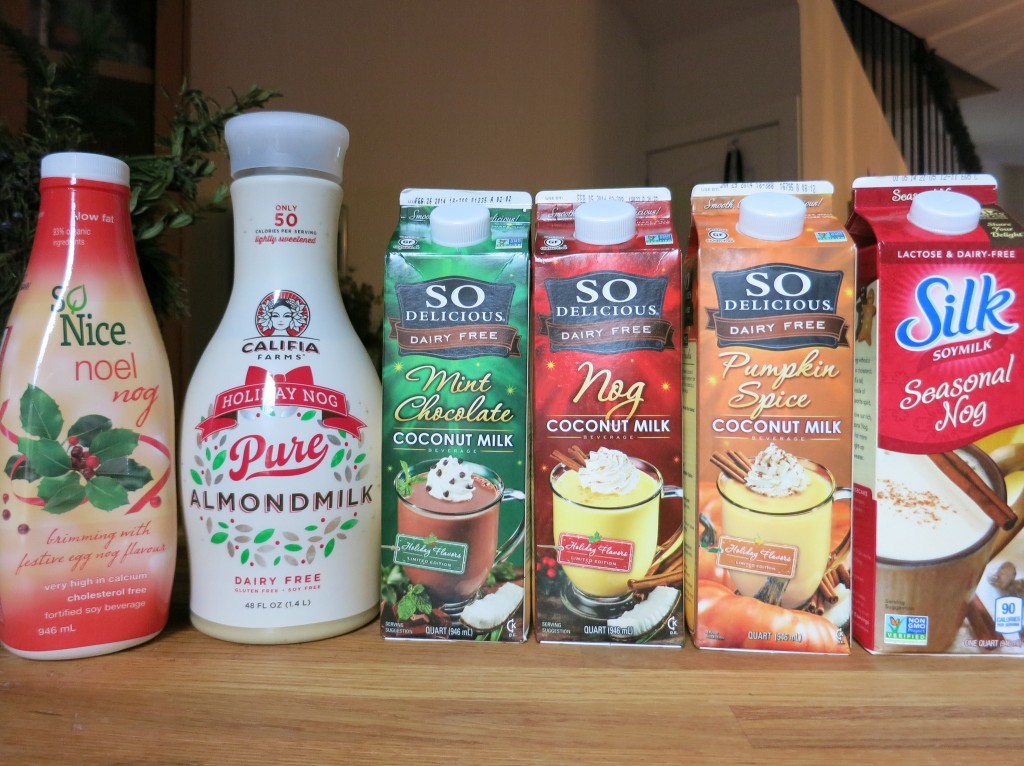 “Research” Method* for Part One. Notes: Our observations are completely subjective, and you may disagree (because we didn’t agree with each other either). But I would love to hear what you think of these nogs if you have tried them! (or if you have any other recommendations.)

And of course, thanks to JC for drinking so much nog!

JC’s thoughts in a beautiful chart form.
Sure I could have made a table on a computer, but what better way to do something fun and silly than to reuse the back of an envelope. This was my least favourite. It wasn’t thick and it wasn’t particularly delicious either. I’ll admit I wanted to like it, as I’ve liked many of the other Califia Farms flavoured almond milk products before. There is something strange about it, that I can’t quite put my finger on. You can see the photo here on Flickr, but the Califia Farms nog and kraken spiced rum did not immediately incorporate. They did mix together and stay mixed together after vigorous stirring. After letting the nog sit for an hour or so, I didn’t see any separation or layering. This one is one I’m most familiar with, as it’s one of the first Soy Nogs that arrived across Canada. I’m still pretty fond of it, in terms of nostalgic attachment, but it doesn’t have a very high viscosity when compared with the other nogs. It’s light, but spiced nicely.

So Nice Noel Nog was Nog 3 in the rating table, and ranked about second last on average.
Taste – 6
Texture – 5
Sweetness – 8
Spice – 6 So Nice Noel Nog and Alcohol.

You can take a look at the photos here on flickr, but So Nice Noel Nog mixed readily with the Kraken Spiced Rum, and they paired well together. The 1oz rum to 250ml nog ratio seemed to work well for flavour and alcohol content. Not overpowering. This was JC’s favourite, and I thought it was delicious, but it wasn’t my favourite. It was fairly light, but had a nice level of spice and sweetness. You can see a photo of the nog immediately after Kraken Spiced Rum was added here on flickr. It mixed readily. Paired well with the rum, and the spice blended together very nicely and stayed blended. This was my favourite. I though it was spicy, thick, and rich in flavour. So Delicious Nog and Alcohol.

So Delicious Nog didn’t readily blend with the kraken spiced rum as you can see here on flickr, but after a minute or two of vigorous stirring, it did eventually blend and stayed blended even after an hour of being left out to settle. These are both So Delicious brand beverages, and they are both only available part of the year, mainly around December. I’m usually a fan of anything pumpkin or chocolate-peppermint, so I found both of these beverages really tasty.

They are not as thick as the So Delicious Seasonal Nog, but the Pumpkin Spice variety was almost nog-like in consistency (we have been referring to it as pumpkin nog most of the time). The peppermint-chocolate milk had a rich chocolaty flavour augmented by peppermint, and paired nicely with coffee or straight in a glass (or from the carton. don’t tell anyone.)

Now I’m curious about trying to make vegan nog at home, especially after finding a few really great looking recipes online like these: