Sinatra was our extra special night out for New Year’s Eve. It’s (of course) a Frank Sinatra themed restaurant in the Encore Tower in Las Vegas, and once you walk in you just might get the vibe you’ve travelled through time to years gone by. Frank Sinatra music plays en loop, you will get people demonstrate the wine with all the flourish of any other fine dining establishment, and while they have a vegan menu, they will be surprised that you want it (or at least they were in our case.)

First of all, they bring a basket of bread – remember to ask for Earth Balance or say you’re vegan from the beginning. It does make it easier. We started with the Insalatina deli’ Imperatore, but I’d just call it a Caesar salad. Spears of fresh crisp lettuce, a sharp flavourful caesar dressing, and a few spears of thinly sliced toasted bread. I’m not generally a salad lover, but this was an excellent start to the meal (and just happened to be delicious.) Along with the salad we ordered the Agnolotti pasta as an appetizer. JC and I wanted to share, so they split the order to two plates for us. Each angolotto was filled with butternut squash, sage and vegan butter, and then drizzled with more vegan butter. I’m not sure what can be said about this, other than it’s heaven and the delicious little pillows full of butter sage butternut squash were a great starter. JC had the Zuppa di fagioli, a borlotti bean soup with farro grains, that I didn’t try for reasons unknown to me. On the bright side, it looked amazing, so at the time, I’m sure that was good enough for me. After enjoying our appetizers and wondering why we still had mains cooming, the rest of our banquet arrived. My main was the Gardien Parmagiana. A dish that takes the regular ol’Gardien cutlets, covers them with a savory pomodoro tomato sauce, and tops it all off with vegan mozzarella. The dish is exactly as described and delicious if that’s your sort of thing. But I can say with certainty that JC won at dinner. He had the Gardein Marsala. A tender gardien cutlet paired with pillowy potato gnocchi, everything is topped with a forest mushroom marsala wine cashew cream cashew cream sauce. I would eat that again in a second (& I may have stolen a few bites here and there.) If you for whatever reason find yourself at Sinatra do order this. 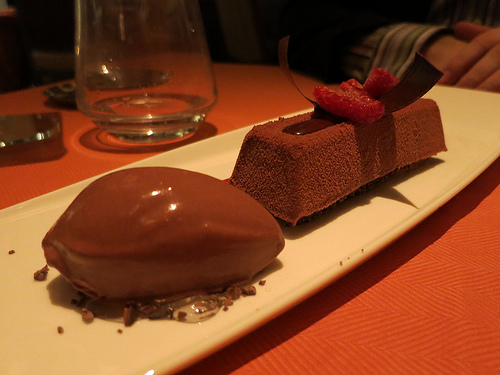 And finally… there was room for dessert solely because we got most of our entree’s packed up to go. We opted to share the Cioccolato. The menu description does not do this dessert justice (it’s even better than it sounds.)  A rich, dark, dense bar of valrhona chocolate mousse (more like a truffle really) with hints of raspberry, topped with chocolate powder. A pat of raspberry coulis on the side, and if that wasn’t enough, there was an almond  milk chocolate sorbet. Simply divine (and in my head, I’m saying it a la Factory Girl.)

Criticisms: The waiter seemed put off by our vegan gluttony, which was a little bit of an annoyance, but not really relevant to what we would order. He questioned whether we appreciated how much food we were ordering, which generally seems uncouth. While we did end up taking out portions of our dinner, but we ordered with the expectation of doing so.

And since it was New Years Eve, it was the biggest part of the year, but that night we did not go out to The Strip like most of Vegas. We had a lovely view of most of the fireworks from our hotel room. We’ve travelled through time and space, from San Francisco, to Las Vegas.
– Millennium – Happy birthday to me!
– St. Francis Fountain – Brunch of Champions
– Souley Vegan – Amazing vegan Soul Food in Oakland
– Herbivore – Brunch of okay.
– Gracias Madre – Delicious food with a side of sexism.
– Another visit to Souley Vegan and a quick run to Cinnaholic.
– First Night in Vegas – Living it up with vegan room service.
– Brunch at Tableau – Beautiful, tasty, with friendly service.
– Ronald’s Donuts – Vegan Donuts, ’nuff said.
– Pizza at a Slice of Vegas and California Pizza Kitchen