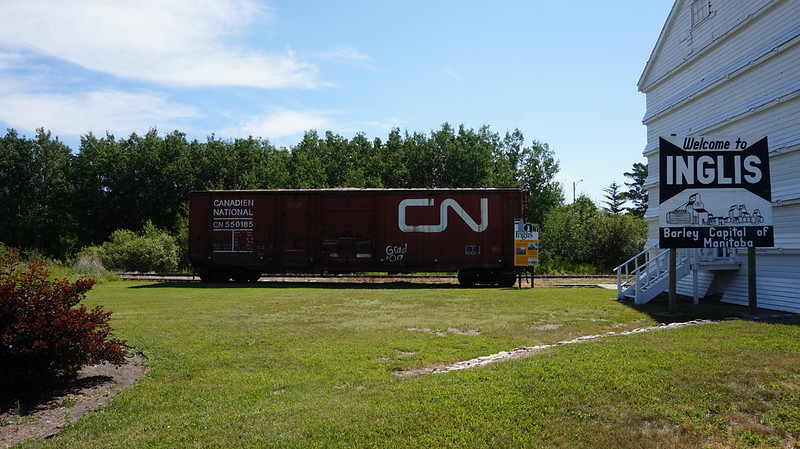 We took a short detour off our drive to Saskatoon from Riding Mountain National Park to visit Inglis, Manitoba.

Why Inglis? Because my non-prairie urban Torontonian husband is fascinated with Grain Elevators, and I’m always pretty excited about National Historic Sites, so it seemed like the perfect stop to visit along the way, it wasn’t that far off the highway, and it’s a very worthwhile piece of history. If you don’t care about grain elevators, best just skip this post, because that’s all I’m going to talk about. 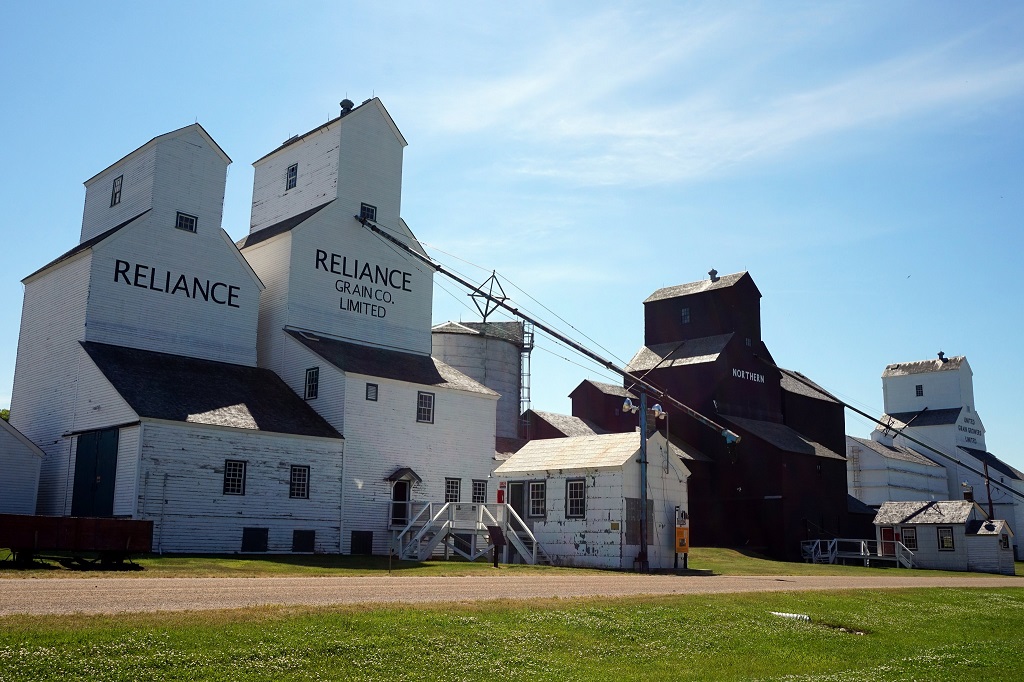 I took so many photos and random shots in Inglis and near the elevators, but it’s hard to decide which angle of a Grain Elevator will be particularly compelling.  I find these buildings fascinating, and still historically significant in terms of how people transported, contained, and processed part of their food. If you’re interested, Inglis has an outside walking tour guide available online where you can read through and see the different buildings and their importance.

What I found quite interesting about this place, and checking their website, is that you can see the amount of restoration that this town and probably Parks Canada has put into rehabilitating these old grain elevators. I will link to the older photos for each corresponding elevator, the differences are often pretty significant. 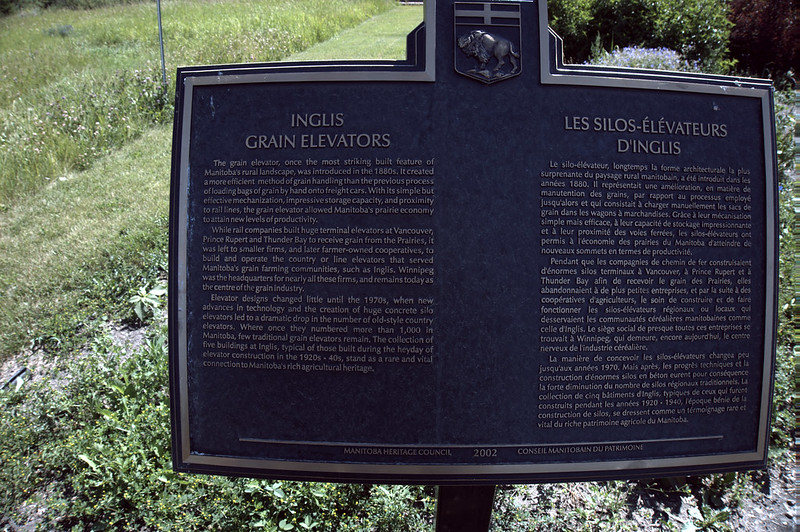 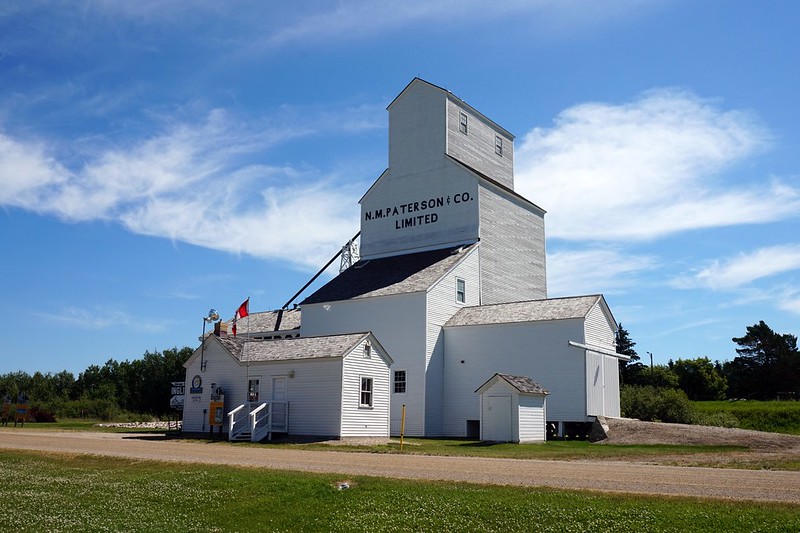 (this is the old N.M.Paterson & Co elevator)

The Paterson Elevator, at the very north end of the row, was built in 1922 by N.M. Paterson and Sons.  Paterson owned it throughout its entire period of operation.  When it was first built, it was considered to be a “Cadillac” of elevators.  It is the only elevator in the row with a dust collector. What this actually means is that it had a dust collection system which reduced the risk of fire from explosive grain dust.

We wandered into this grain elevator first and spent a blissful 10-15 minutes inside of it alone, reading the various plaques, and looking at old documents. Our joy was reduced by an over eager individual that told us for insurance reasons we couldn’t be inside alone and we opted to just leave.

I didn’t enjoy my encounter with this person, as he almost insisted on touching my shoulder as I left and I thought that was weird. Maybe it was just an attempt at being nice, but he certainly didn’t try and touch JC on the way out, who walked out moments after I did. Personal space yo. 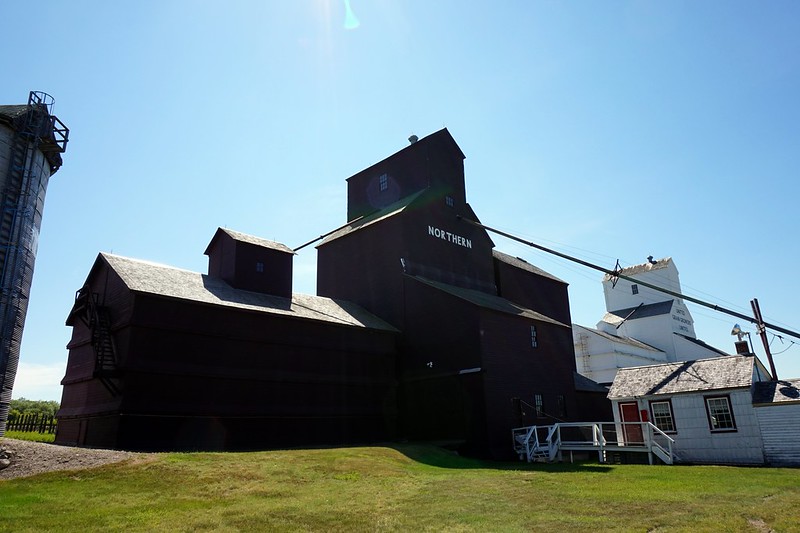 The National Elevator, which was built by the Northern Elevator Company between 1920 and 1922. This Company became part of National Grain in 1940 and as you can see it still bears the National logo. Cargill bought the elevator in 1974, but opened it for only a short period before it was sold or traded to N.M. Paterson and Sons.  Paterson owned it until its closure. 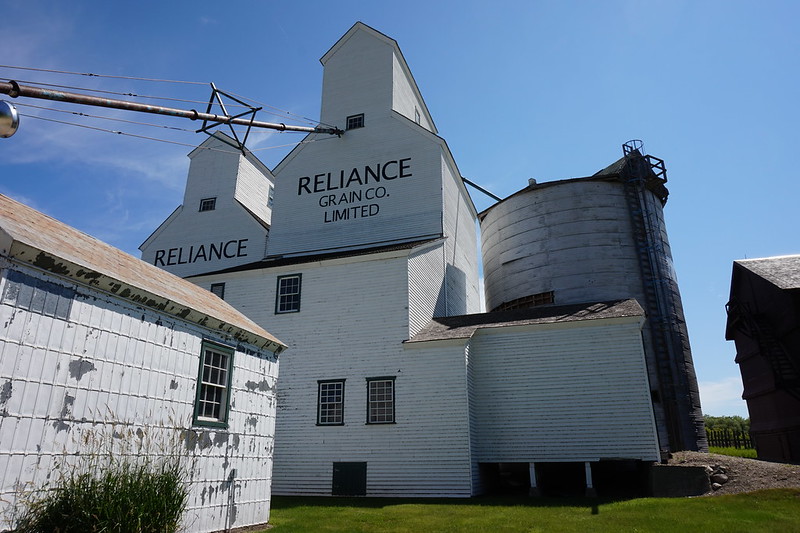 (The Reliance Elevators Before Renovation)

The Reliance Elevators  Matheson-Lindsay Company built the smaller elevator, in 1922.  The Province Elevator Company bought this elevator in 1928 and in the mid-1930s, the company changed its name to Reliance.  In 1941, Reliance built the second larger elevator.  Manitoba Pool bought both elevators sometime before 1952, and then UGG bought both in 1971.

These two elevators have since been completely restored, take a look at the linked picture above if you’re interested in seeing what they looked like before restoration/renovation. 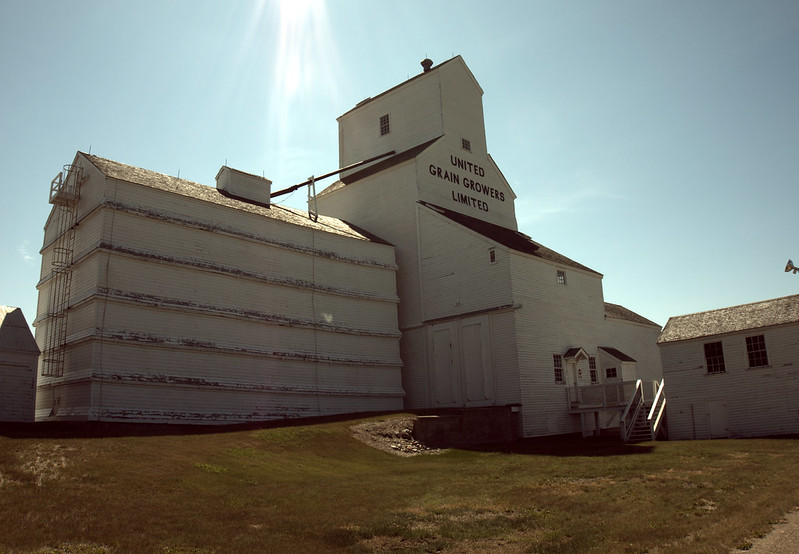 This is the United Grain Growers Elevator which was built in 1925 (after their first elevator in Inglis burned down.) Fire was a constant concern for elevator agents, which is understandable considering the quantity of dry wood and the previously mentioned highly-combustible grain dust.

It too a visit to this site to finally make the connection between the UGG logo I have seen throughout the prairies, and what they actually do/sell/process – FYI it’s GRAIN.

I was glad we stopped in Inglis and really enjoyed wandering the grounds and learning a bit more about the history of both the Canadian grain industry, especially in the early years, and indulging both a love of history, and JC’s fascination with Grain Elevators (“they built the west”). If for some reason you want to read more about wooden grain elevators, I found both the Inglis site and this quick overview from the Basement Geographer (we didn’t visit any more of these though.)