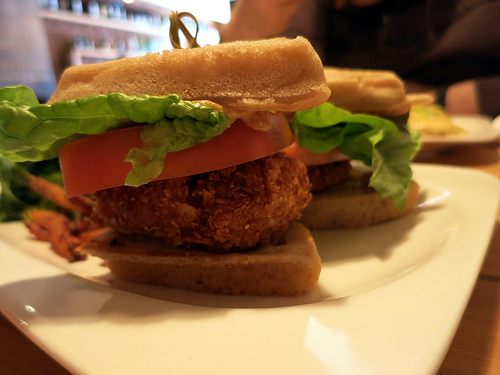 JC have spent an increasing amount of time visiting Grasslands over the last few months. There have been the celebratory dinners, those random moments of “I would like to take you somewhere nice”, and the quick post-movie bites to eat (it is rather conveniently located a few minutes away from the Scotiabank theater) and those times when you want to take someone from out of town out somewhere vegan fancy-casual. We’ve attempted two large reservations since the tipping issue from our very first visit but it hasn’t worked out for some reason or another. Maybe groups of more than just JC & I + Grasslands just aren’t meant to be? Or we should just make fewer last minute reservations? I’d probably go with that one. Maybe. It doesn’t matter, they seem perfectly capable of seating JC and I most of the time, and it usually ends up lovely.

Recently we went with JC’s Mom, and genuinely had a great time (and I think it was more than just company). I keep seeing the same couple of servers every time we go in. They’re great. They’re nice. And they don’t make me wish I was somewhere else.

Grasslands feels a bit more like Vedge now, but with a uniquely Toronto vibe, and if they ever have the equivalent of Vedges “Dirt list” at Grasslands (locally sourced random dishes of the day/moment), I will be beyond excited.

The ambiance is good, the food is good, and the menu seems to still be evolving and changing in new and interesting ways.

It’s nice to check what’s new in the appetizer or salad section, what the soup of the day is… while still seeing familiar dishes that are well liked (at least by me… I’m looking at you skewer.) Do you know they have brunch now? They have brunch. Please look at the menu, because when it “accidentally” appeared with our dinner menus week or so ago and we looked through it, we were really excited about visiting… so we did. (and when I do the quotes, I mean it actually happened accidentally – BUT I think it’s a great way to get people even more hyped about brunch.) Go take a look at the menu on their website.

The food always looks the same (I like this), except when I recently worked up the courage to ask for no gai-lan with my mustard tempeh (& it’s not that they are scary, it’s more that I would rather avoid asking for modifications in vegan restaurants, but the gai-lan was getting in my way and p.s. yes I really don’t like gai-lan) The change was no problem.

A few times, when we’ve visited we’ve started with the Charcuterie Board. This thing is great to share with two – three – four people and has a collection of house made vegan meats, usually at least one in-house made cashew based cheese, pickles, olives, spreads, and breads. I ordered the mustard tempeh (which is slightly edging out the skewer as my favourite), and it seemed to come with more than the usual amount of potatoes (instead of gai-lan) so really what they ended up doing is replacing one of my least favourite vegetables with one of my favourites thus being extra delicious. Everything is slightly different everytime, but generally continues to only get better.

JC had the Seitan Roast, no modifications. Overall, Dinner at Grasslands is really doing it for me. JC and I keep going back, because so far the experience has been consistently good, food-wise, service-wise, and ambiance-wise.

FYI. This is still dessert. This past weekend we finally checked out the Grasslands Brunch. Like I said, you can go check out the menu on their website. We both started out with the bloody mary mocktails, which I had an enjoyed on our last visit. JC liked them a lot this time. But I like mine spicy. From what I heard, that puts me in the minority of patrons that day (I can deal with that… I’ll just ask for hot sauce next time.) JC ordered the sausage and the Tofu Benny. They were out of side sausage, but I stole a bite or two of the Tofu Benny. It’s smoky tofu layered with wilted spinach, fried tomato and a Hollandaise sauce on an English muffin. It comes with a side salad and fries. I stole a bite, but don’t really have a comment. I have really tried to like benedict/hollandaise dishes, and while I foresee a  future of trying many, since it’s one of JC’s “order it every time” dishes, it’s just not my kind of thing. As for one of my “order it every time I see it vegan” dishes that I’ve mentioned before, I ordered the Chicken & Waffle sandwich. It was a breaded and fried super crispy vegan chicken piece (a gardein/gardein style cutlet) sandwiched between maple-y waffle pieces. I’m at least 55% certain that there was some kind of delicious maple cinnamon butter on the waffle.

JC thought it was weird that there was a tomato, and maybe you’ll agree but I thought it was great. The tomato and lettuce were crisp and fresh. My only problem… the chicken and waffle plate was way more than I could handle and had to take one of the pieces to go with me. (Which I enjoyed later that day for dinner.) My dish also came with fries and a side salad.

Inevitably, we will eat here again, because we like it. If you haven’t had the chance, you might want to try brunch or dinner at Grasslands sometime too.