This is a continuation of yesterday’s post on the awesome stuff we tried at ExpoWest last week. Yesterday I covered a few of the Not Meat & Other Alternative products, There were lots to choose from for that category, and also lots to choose from in the Non-Dairy Dairy-like products as well.

Here are some of the non-dairy milks or alternative products that we saw at ExpoWest last week. There will be another non-dairy ExpoWest finds post up tomorrow. There was a lot of wonderful stuff, and I haven’t even touched on all of it.

There were a couple of non-dairy yogurts I tried at the Expo that I liked, but there were two that I just loved. Coyo has been around for a few years in Australia, New Zealand and the United Kingdom, but launched on Friday March 7th, 2014 in the USA (on the first day of ExpoWest). I had the mango variety and it was phenomenal. Coyo seems coconut cream based, with the familiar tanginess of yogurt. It comes in a few different varieties other than mango, they also have natural, mixed berry, and chocolate.

I’ve asked on Twitter when/if they’ll be in Canada, but I guess I’ll just be patient.

It was nice to see WholeSoy & Co at ExpoWest. I’m sure you’ve heard about their factory problems. Shortly after they entered the Canadian market a year or so ago, trouble hit them and they stopped being able to produce their yogurt. Well, they’re back, and getting ramped up again.

They’re still one of the best soy yogurts I’ve tried. I look forward to seeing them in stores again soon.

This stuff was fantastic. I tried Mr. Dewie’s chocolate and coffee cashew milk varieties and it had that creamy smooth consistency that I’ve come to expect from cashew based products. They also make almond milk ice creams, but I didn’t try them. They were super friendly, and it sounds like being in Canada is a possibility for the not-so-distant future. I emailed earlier this week about the source of their cashews (as cashew nut workers can experience some pretty terrible working conditions) but I’m still waiting on a reply.

If I was thinking, I would have taken a picture of the incredible setup Luna & Larry’s Coconut Bliss had at ExpoWest, but I was amazed and delighted by the options and too busy eating ice cream. They had nearly all of their coconut based ice creams available for tasting. 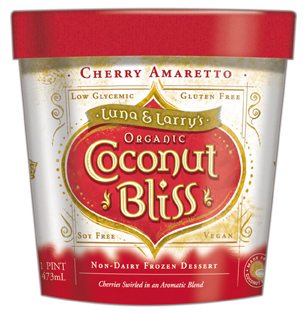 And I tried the Cherry Amaretto upon the suggestion of one of the nice folks there, and it was great. Many of their products are available in Canada (but not all – see their Canadian Sales Sheet – PDF), & you can find the stores that carry them in your community through their store locator.

While at the show, I picked up their adorable and beautifully illustrated “Story of Coconut Bliss” and thankfully it’s on their website so I can just share it with you. It’s just a little colourful square, but it was a pleasure to find it among my collection of papers from the show. I like that there is actually a Luna and a Larry.

When I saw the Aureeva representative there I wondered whether people and businesses in the USA would understand the idea of milk in a bag. I think it’s a great idea, probably because it’s not unusual to see such a thing in Canada and because I recognize how much easier bagged milk is to store in the fridge.

Aureeva is based in Canada, and have soy milk and almond milk. The milk comes in 4L bags and 1.33L bags in boxes. I’ve posted about it before, but I think it’s worth mentioning because it’s a great idea, and I wish I saw it in more stores.

Find them in your area on their store locator.

I haven’t always loved everything from Califia Farms (you can read about the grand Vegan Egg Nog taste test from last year) but I like most of their products. Especially their cold brew coffee almond milk blends. Every time I’m in the USA it seems to be the company I gravitate towards for most of my non-dairy milk drinking, but the relatively new single serving grab and go cold brew almond lattes are a new favourite. At the show they were launching shelf-stable barista blend almond milk, and I even got the opportunity for a surly barista experience at their booth, and drank an excellent almond latte. It frothed well, and wasn’t too thick, or too light. It was just right. I would like to see this product in Canada, plus all of their grab and go cold brew coffee almond milk mixtures. It was hard to get any information at their booth at ExpoWest on when or if they would be available or distributed in Canada, so we’ll have to follow up online sometime.

The So Delicious Empire

Is there anything So Delicious Dairy Free doesn’t do on the dairy replacement front? They’ve got yogurt, frozen dessert bars and iced creams, coffee creamers & barista blends, cashew milk, coconut milk, prepared coffee latte beverages. It just seems like they’re doing a pretty awesome job with all of those. Here is where they get their own category. Their ExpoWest booth was pretty spectacular. They had book signings, they were offering up freshly made fancy coffee related beverages. They even had gorgeous “to stay” cups made by Holly Christensen, a So Delicious staff member. I had a basic coconut latte made with their original flavour coconut milk creamer, and it worked great and tasted fantastic.

They were also showing off a couple of their new flavoured grab and go coffee options – the Cococcinos –  that I haven’t seen before and definitely have not seen in Toronto stores. Which makes sense since it was one of their newer products. They had Latte and Mocha flavours, made with organic fair trade coffee. 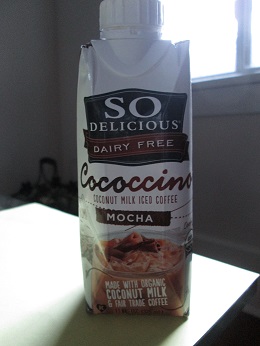 Initially I liked it (I tried the mocha), but it had a slightly strange aftertaste. I haven’t been able to put my finger on the flavour that stood out for me, but I think it might have been the monk fruit extract they used as an additional sweetener, or I might have not shaken it properly. I’ll have to talk more about monk fruit in a future post because it’s appearing in a lot of upcoming products, at least in the USA.

I’d probably buy this coconut milk based grab and go coffee if I saw it in stores, and I’m glad I got to bring a container home with me. No sign of when/if this will appear in Canada, as they’re focusing on their US launch, I would love to see their cashew milks available here soon!

Outside of the Expo they were handing out So Delicious coconut ice cream bars in the Food Truck area, so I got to try a coconut almond mini which was delicious and available in stores right now. But they have additional mini flavours that are coming out soon.

As a vegan attending ExpoWest I was very aware of some of the egg and dairy brands trying to present an image of “Happy Chickens” and “Happy Cows”, which I found fascinating. Several made a point of stressing how humane and happy their cows and chickens were in promotional materials and displays and in conversation. It feels like there is a growing level of understanding of the cruelty involved in these industries or at least an awareness that the public knows more about this than ever before & yet, there still seemed to be a few steps lacking in this approach.